- Littlehorn can be found inside a small hut, located in the Scrapyard. If you chose Contract killer perk you will be allowed to enter the building and talk to him. Littlehorn can pay you five bottle caps for each ear of a good person you deliver to him.

- During your exploration of the northern section of the Scrapyard you'll probably hear gunshots. Inspect that area and you'll witness a battle taking place between a dog and a group of raiders. The animal is our favorite Dogmeat (screen) and it'll be able to join your team. During the "conversation" with the dog be very friendly towards the animal by choosing the first answer from the top. You should know that Dogmeat is added as an additional ally, so you won't have to leave your current companion behind. 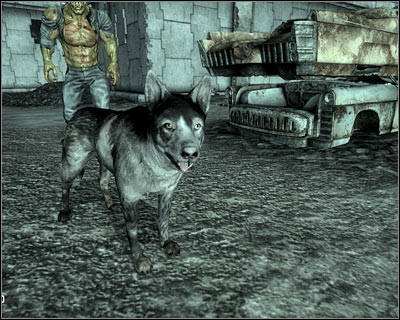 If you're not playing as a neutral character, you must acknowledge the fact that you'll be attacked by other wastelanders from time to time. If you're a good character you'll be dealing with Talon company mercenaries and if you're a bad person you must be ready to kill the lawbringers sent to kill you. These fights are usually difficult and you should avoid them if possible, especially if you're standing in a bad spot when the battle has started.

You won't encounter any vertibirds at the beginning of the game. The situation will change when you finish The waters of life quest. From now on you'll be dealing with the flying machines right until the end, unless you destroy Raven Rock while trying to fulfill American dream quest. Vertibirds usually appear near Enclave outposts, however you may also be attacked by one of the flying machines if you decide to destroy a flying eye created by the Enclave or if you dispose of a large group of Enclave soldiers. I would recommend staying away from the areas where the vertibirds are landing, however you may also use your most powerful weapons to destroy them (screen). 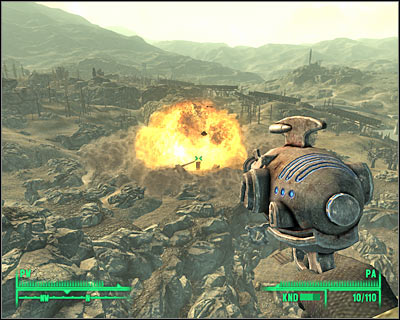 During your conversation with Uncle Roe from Canterburry Commons you'll find out about the existence of wandering traders here in Capitol Wasteland. If your barter speech is high enough, you will be allowed to make Roe a business proposal. You can suggest that all the merchants should increase their specializations and that they should expand their businesses by hiring better protection and using more brahmins.

Roe will now give you three documents - a contract, a map of the caravan route and the names of all the traders. You can now return to him each time you've gathered enough money to spend on the trader of your choosing. Here's the list of traders and their specializations: Harith - guns, Crow - armors, Doc Hoff - medical supplies and food, Crazy Wolfgang - scrap and other items. If you decide to invest into traders, their stock will grow overtime. You will also unlock access to mininukes, as well as three unique weapon schematics.

You can kill each of the wandering traders if you want to. In that case you'll gain possession of a lot of goods - you can collect items from the caravan and you can take the key to the main stash. It's located in Canterburry Commons, so you'll have to travel there to get to the best stuff.