- A ghoul who goes by the name of Murphy is going to offer you a deal. He'll pay you for each sugar bomb you deliver to him. Don't forget to win a speech challenge, so he'll have to pay you more than he originally planned. You can also ask him about ultrajet which is his current project.

Temple of the Union

- When you arrive at the Temple of the Union for the first time you will probably have to chat with Simone Cameron. It shouldn't be a problem for her to allow you to gain access to the temple. You must now go talk to Hannibal Smith, because unless you agree to protect the temple and its inhabitants, he won't allow you to leave this area. Hannibal will give you a special key, used to open the main gate. You should also know that you won't be allowed to travel in the vicinity of the temple.

- This entire area is swarming with the supermutants and you should also know that you'll be dealing with the strongest variations of these creatures. As a result I wouldn't recommend travelling to this location unless you're prepared. Ignore the factory itself, because you wouldn't find anything of interest there. Instead travel west and eventually you'll encounter a behemoth (screen). Obviously you should use a fatman or a minigun to dispose of the beast. Watch out for other supermutants while trying to eliminate the behemoth and examine its body when it's all over. 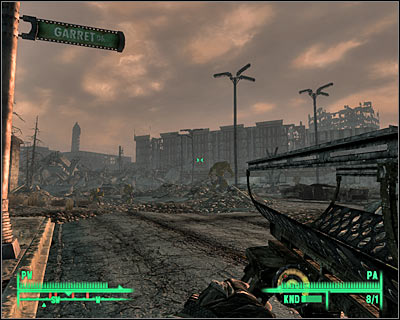