- Knock Knock is a sheriff around here. You can listen to her telling you a joke (usually a bad one ;-)) or you can repay by telling a story. At the beginning of the game you're only allowed to tell the story of your escape from Vault 101, however new options will become available upon completion of Following in his footsteps and American dream quests.

- You may encounter Sticky near the entrance to the Little Lamplight. Sticky will ask you to take him to Big Town, because he's too old to live here and he's been banished by the rest of the kids. You can agree to help him, but he would only have a party hat for you. :-)

- Zip tends to travel throughout the entire Little Lamplight. You can agree to do business with him if you manage to catch him. If you have a Nuka-Cola bottle he can give you something else in return. Usually it's ammunition or a stimpak.

- Biwwy wants to you sell you his wazer wifle. You can pay him 500 bottle caps for this weapon or you can persuade him to give you the gun for free (Child at heart perk is required here). The rifle is very good and you should take effort in acquiring it.

- Princess can be found near the northern exit (it's the one leading to Murder pass). You'll probably notice that she has a nasty attitude. Once you've rescued the kids from Paradise Falls talk to Sammy and if you're convincing enough you'll find out some interesting facts about the Princess. Return to her and use that knowledge against her. For example, you can tell her that the mayor is in love with Lucy.

- You'll probably encounter Michael Masters near the entrance to Megaton. You can give him some refined water and in return you'll notice that your karma has been increased.

- Confessor Cromwell can be found near the large bomb or inside Megaton - Children of the Atom church. You can find out more about his organization and about his beliefs or you can decide to contribute by giving him caps (no more than 100 at a time). Doing so will increase your karma by the exact number of caps you've given him.

- Walter can be found in Megaton - Water processing plant. Talk to him and you'll find out that he has some problems with a few leaks. Agree to help him and use my map (screen) to locate these areas. You should know that your repair skill must be raised to at least 30 points in order for the actions to succeed. Each time you must approach a leak and press the action key. Once you've done your chores, go back to Walter and he'll reward you with 200 caps. From now on you can also deliver scrap to him, because he'll need it to make additional repairs. 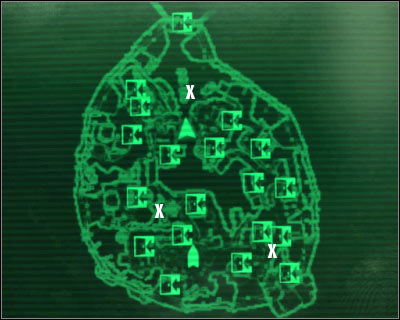 - Doc Church can be found in Megaton - clinic. Talk to him and if you win a speech challenge or show off with a high knowledge in medicine he'll mention that one of the inhabitants of Megaton is a drug addict. Once you've acquired this knowledge go to Megaton - Water processing plant at night. Ignore Walter and proceed to a small room in the back. Talk to Leo Stahl and inform him that you know about his addiction. There are many ways to solve this problem. You can threaten Leo that you'll tell the rest of the folks about the secret and demand drugs or money in return. You can also help him fighting off the addiction. If you convince him to stop using drugs, he will give you a key to his stash. Collect drugs, because they're very valuable.

- Once you found your way to Megaton - Moriarty's saloon you can spend some time in the back. You should be able to find Moriarty's terminal. The password is lotsacaps and you can receive it from Nova. There are a lot of interesting information on Megaton citizens and guests in the computer. One of the messages is about James (your father).

- There's a computer terminal in Megaton - The Brass lantern. If you manage to hack into the system you'll be allowed to open a nearby safe. There are 300 bottle caps in the safe. Naturally taking the money will lower your karma and you'll also have to avoid being seen.

- Opening the door to Megaton - Armory is not going to be easy, because the lock is very sophisticated. You'll probably want to return here later on. There's a hostile robot called Deputy Steel inside. Destroy the robot with your primary weapon or hack into the terminal quickly, because you'll be allowed to disable it. Obviously you'll find a lot of guns and supplies inside the armory. Don't forget to examine the contents of the safe.

- If you have nothing against using cheats (game codes) to find easter eggs, use noclip to fly towards a sniper called Stockholm. He's stationed above the main entrance to Megaton. He will be very surprised to see that you found your way to his post. :-)

- Jericho - He can be found wandering the streets of Megaton, spending his free time in Moriarty's saloon or resting in his house. You must be playing as a negative character, because otherwise he won't agree to your offer. Also, even if he does, he'll require you to pay 1000 bottle caps for his services. Nonetheless, you should consider teaming up with him, especially if you want to have a good companion from the start of the game.

- You can acquire two unique weapons while exploring the trainyard, however this can only be done if you agree to lowering your karma. The first weapon can be found in a locker in Vance's quarters. You must have a key or 75 points spent on lockpicking to gain access to the locker. Open it and take vampire's edge. As for the other weapon, you'll have to take it directly from Vance. It's a shishkebab - one of the weapons you can manufacture yourself if you find proper plans.