- If you try to get closer to the chapel, you're going to be automatically attacked by a sniper called Drifter (screen). I would recommend running towards the chapel and eliminating him from a smaller distance. Inspect his dead body and you'll gain possession of an excellent reservist's rifle. Also, if you haven't been to the Oasis yet, it'll be marked on your personal map. 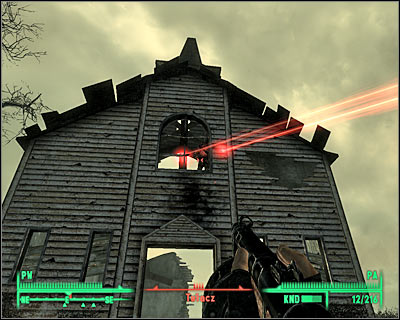 - I'm sure that you remember robot Andy from your birthday party. During your second stay in Vault 101 you'll find Andy in the clinic (where you father had his office). If you ask Andy what's going on, you'll find out that he's been reprogrammed to become a medical robot. Judging by the state of his patient, he's not good at what he's doing. :-)

- I would also recommend that you inspect the main office in the clinic. That's where James had his office. Notice a tablet on the wall (screen). You weren't able to open it before, but now's your chance. Obviously you must raise your lockpicking skill to succeed. There are some bottle caps hidden inside, as well as a holotape, however you should be only interested in a schematic for a rock-it launcher. 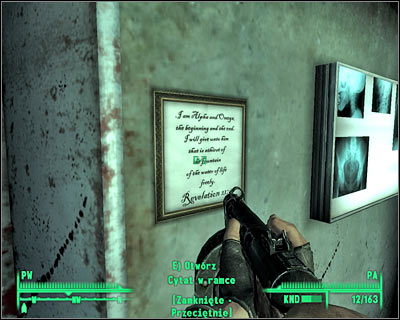 - You'll probably want to visit this vault only for one purpose - to acquire a Vault-Tec bobblehead. You won't find any other valuable items inside the vault. Instead, you'll witness a lot of hallucinations, especially near the reactor. You can look around for Overseer's notes on the situation and you'll find out that the hallucinations are an effect of a gas being released into the system. You'll probably encounter at least a few vault inhabitants, but they'll be hostile towards you. Thankfully, they're easy to kill and you won't receive negative karma for eliminating them.

- Just as before, you should consider taking a trip to this crypt only if you have plans of acquiring a Vault-Tec bobblehead (this particular one is very valuable, because it can raise your charisma by one point). The inside of the vault is being occupied by cloned citizens. I guess you won't be surprised to hear that they'll be hostile towards you. Eliminating the army of clones shouldn't be a problem. You can search for information about them, however it's optional.