Solution: This quest is activated during your first conversation with Agatha. The old lady's shack can be found to the north-east of Big Town and in order to get there you must cross a large gap using a draw bridge. Listen to Agatha's story and don't interrupt her. You'll find out that the one thing that would make her happy is a violin. If you have a Lady killer perk or high speech skill you can suggest to Agatha that she should offer you some kind of a reward. As a result, you will be given a key to an ammo stash. Thankfully you don't have to look for the stash, because it's in this room (screen). You'll find a lot of supplies inside and I'm sure that you'll use them to complete the quest. 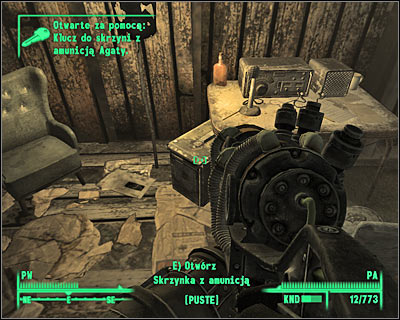 There are two ways to complete this quest - a quicker way and a longer journey. You can take the quicker way if you don't want to waste any time trying to find Vault 92. You can find out where it is by reading my guide, by achieving 20th level of experience and choosing an Explorer perk or after your first visit to the Citadel. In such case you may proceed directly to Vault 92. If you want to be more thorough, you can spend some time trying to find the location of the vault. The easiest way to do that is to go to Vault-Tec Corporation headquarters. This building is located in D.C. ruins which means it's not going to be easy to get to it. I would recommend using subway tunnels. Start from Chevy Chase - north (you've probably unlocked this station while trying to get to Galaxy News Radio). Travel east in order to get to Chevy Chase - east. Use the gate to down into the tunnels (Metro junction). Now you must proceed to Vernon Square - north. If you've done everything according to the plan, you'll end up exiting the subway and standing in front of Vault-Tec headquarters (screen). Obviously you'll kill a lot of creatures along the way, including supermutants and mirelurks. 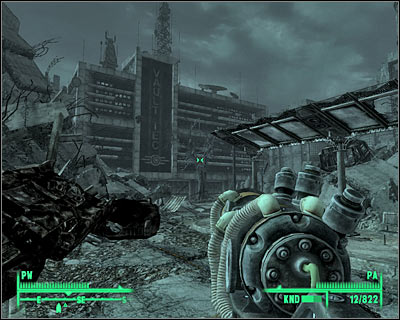 Proceed to the front door and confirm that you want to travel to Vault-Tec - guest relations. Sadly, you will have to acknowledge the fact that the entire base is going to be defended by hostile robots. This is definitely going to make your progress harder. I would recommend that you equip yourself with a lot of pulse grenades and landmines before proceeding with the quest. Watch out for Mister Gutsy's and sentry bots (screen), because they're capable of inflicting major injuries to your main character. Don't forget to inspect each room, crate, locker and safe you'll find along the way. Eventually you must get to a section called Vault-Tec - administration. You can get there through Vault-Tec - corporate offices or you can try jumping towards an upper balcony from a destroyed stairway. 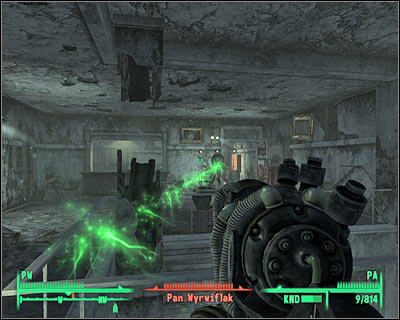 Once you've reached Vault-Tec - administration your next goal will be to find three security terminals. Look at my screen if you don't want to waste any time searching for them on your own. You should also know that they're located on different floors so if you don't see any stations in front of you travel to a different floor. Each time you must use a computer. Click on an option which will approve access to the mainframe. In addition to the stations you'll encounter a masterbrain among other robots. Destroy the masterbrain and press the action key while standing over the wreckage. Doing this will allow you to shut down other machines in the area and obviously this will make your progress a lot easier. Once you've used all three terminals proceed to a door with a large green lamp. Open the door and approach the mainframe. Use the main computer to acquire information on Vault's locations and access codes. You may exit Vault-Tec headquarters. 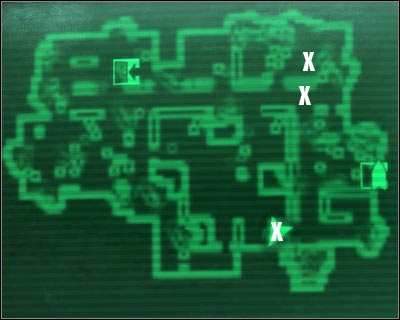 Vault 92 can be found near the northern edge of the map. To get there you'll probably need to make preparations for a long trip. I would recommend approaching your target from the south, however this doesn't necessarily protect you against encounters with extremely dangerous deathclaws. Avoid getting too close to these monsters, because they're deadly in an open combat. The main entrance is located among the rocks, so you'll have to look around a little to find it. Approach the door and confirm that you want to travel to Vault 92. There are some medical supplies near the entrance. Take them and begin your exploration of the crypt. Eventually you'll have to get to the central area of the vault (screen). Watch out for traps (including landmines). Be on a look out for mirelurks (including the most dangerous kind - mirelork hunters) and bloatflies (watch out for their stingray). You can spend some time going to crew quarters or Overseer's office, however this is optional. Your area of interest should be Vault 92 - sound testing. 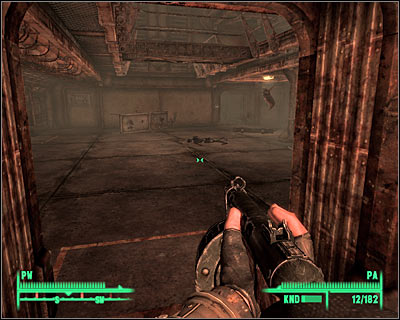 I guess you won't be surprised to hear that you'll encounter even more monsters in the sound testing area. Among known creatures you'll also come across mirelurk kings. It's probably going to be one of your first encounters with these monsters, so take your time to know them better and exploit their weaknesses. I would also recommend exploring this area with an ally, because it may be difficult to survive alone. Look at the screen - that's where you'll find the violin. In order to get to the studio you must use a nearby computer. Gain access (you won't have to prove your hacking skills) and proceed to your target to collect a Soil Stradivarius. 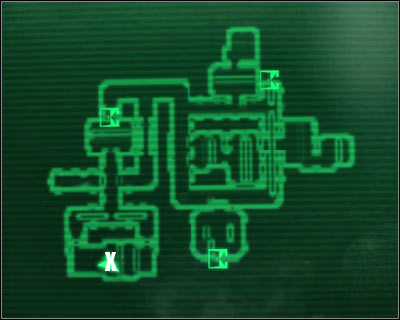 You may leave Vault 92. Obviously you should choose the same path you've used before, especially since you won't encounter any new hostile units along the way. Fast travel to Agatha's house after exiting Vault 92. Enter the shack and inform the old lady that you were able to acquire a violin for her. I'm sure that you'll be surprised with Agatha's reward. In exchange for the violin she will play songs for you and other wastelanders. Check your radio and you'll notice that Agatha's station has been added to the list (screen).

That's not all. You can talk to Agatha again once the quest has been officially ended. If you're persuasive enough you'll find out that she'll appreciate if you go and look for a sheet music book. Agatha will say that the most probable location of one of these objects is the Arlington Library (child literature section - not the media archive), but you can also acquire a sheet music book from several other locations, including Roosevelt's Academy, National Archives, Statesman Hotel (roof), Vault 92 (that's where you've found the violin) and Springvale School. It doesn't really matter where you'll decide to look. Go back with the sheet to Agatha. You can agree to handing it over for free, but I would recommend taking a reward from her. Agatha will give you a unique weapon. It's going to be a Magnum pistol called Blackhawk. 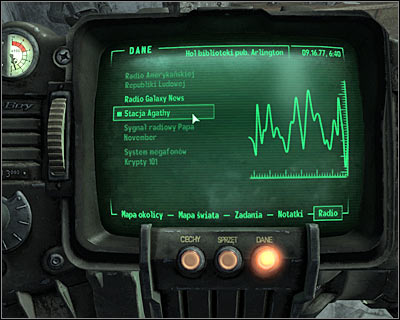