Solution: During your first visit to Big Town you should talk to a guard called Dusty. He can usually be found near the draw bridge. Dusty will tell you about problems with supermutants. You'll also find out that a couple of civilians have been kidnapped. You can ask one of the villagers for the location of the supermutant camp and a new marker will appear on your personal map - Germantown police headquarters. This is where you'll need to go right now. I assume you haven't unlocked any other locations in the vicinity, so you'll probably have to travel on foot. Once you've arrived at your new destination find the main building and get closer to it. Ignore the door leading to the ground floor, because it's locked and you would have some serious problems opening it. Instead head on to the stairs (screen) to get to an entrance on the first floor. Open the door to get to Police headquarters - first floor. 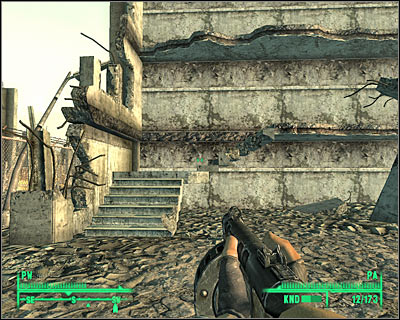 Obviously there are a lot of supermutants inside police headquarters. You'll be dealing mostly with stronger variations of these creatures, so you shouldn't come here unless you have powerful weapons at your disposal. The first group of supermutants (screen) can be defeated quite easily. Approach them undetected and use frag grenades to kill both creatures before they have a chance to fight back. Continue exploring the headquarters. Be on a look out for security terminals, safes and closed lockers. Opening these objects not only will allow you to gather more supplies, but you'll also gain experience points. Watch out for traps. There are a lot of landmines inside the precinct and you may have some problems spotting them. Find a door leading to Police headquarters - ground floor. Thankfully, you can open the door without showing off how good you are at lockpicking. 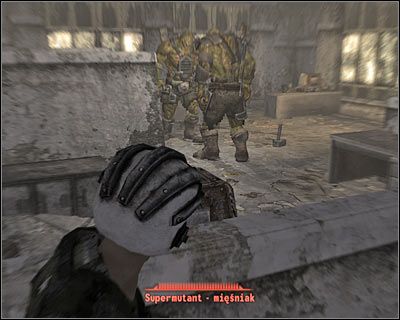 The ground floor of police headquarters is being occupied by other groups of supermutants, but you'll also have to watch out for gas leaks and landmines. There are also a few radroaches inside police HQ, so it would be a good idea to create a shortcut for one of your melee weapons, because you don't want to waste your ammunition on these creatures. Be on look out for a security terminal. If you manage to hack into the system you may get your hands on new equipment. I would recommend finding and killing a supermutant master. The reason for that is he holds a key to prison cells in Germantown. All the cells can be found in the western section of the precinct (screen). Use the key from the supermutant master to open Red's cell or hack into a nearby security terminal and place an order to open all cells. 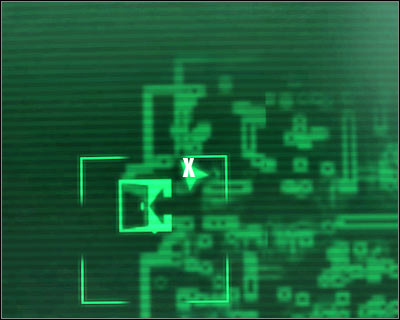 Obviously you should talk to Red. She will thank you for rescuing her, but you shouldn't agree to going back to Big Town just yet. If you're convincing enough Red will tell you about one more survivor, a young boy who goes by the name of Shorty. You'll find out that Shorty has been taken to the kitchen which is located in the basement of the police precinct. Order Red to remain here for a little while longer and begin searching for Shorty. The stairs to the basement are located in the northern area of the map. Open the door to get to Police headquarters - basement. Ignore the mess hall, because there are only a few radroaches out there. Instead proceed west. Kill a supermutant who was guarding Shorty. Talk to the boy (screen) and order him to follow your lead. Now you must go back to Red's cell. She should also begin following you. Exit the headquarters. You may use the same path as before or you may look for an alternative way out.

Important! If Red and Shorty die before you'll be able to return them to their homes, go to Big Town alone and talk to Pappy. He should give you a small reward for your trouble, but obviously you should do your best and escort them to safety. 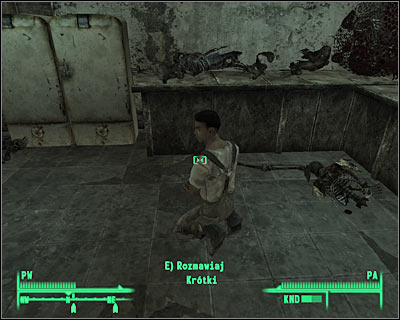 You could travel with Red and Shorty on foot, but it would be extremely risky, especially since they can't fight and they won't follow your instructions. Instead fast travel to Big Town. Enter the village once again and talk to Red. She wants to reward you with 300 bottle caps, but you can refuse and take nothing for your trouble if you want to raise you karma. On the other hand, you may win a speech challenge and request more money from her.

You will soon find out that supermutants have begun preparations to attack the village. Obviously you should consider staying inside Big Town and helping the villagers, because they won't be able to protect themselves on their own. Furthermore, if you have enough skill you can teach them how to operate melee weapons, firearms or explosives. It's not a requirement, but it would make the upcoming battle easier. The most important thing for you to remember about is to place a lot of landmines on the bridge leading to Big Town (screen). You have about 30 seconds, so you can't place too many of them. While you're near the bridge you can also try repairing destroyed robots. Thankfully, you're going to be attacked by the weakest kind of supermutants. You should still focus on protecting the villagers. Talk to some of the inhabitants of Big Town once the battle has ended and you'll earn their gratitude. 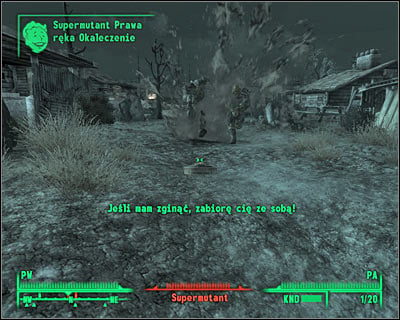