Solution: This quest can only be activated if you're persuasive enough during your conversation with Grouse. If so he'll agree to you doing him a favor. This usually occurs when you want to gain access to Paradise Falls and you can't go in just like that, because you're playing as a good character. Grouse will give you a device called mesmetron. This gun can paralyze its victims for a short period of time. You may use mesmetron on ordinary people, but you'll have to remember that you won't receive a lot of ammunition and Grouse sells additional supplies for ridiculous prices. In addition to the gun you'll also receive your first slave collar and an instructional manual on how to use it. Remember that in order to gain access to Paradise Falls you have to capture only one person from the list, however you will be rewarded 250 caps for each slave you catch for Grouse.

Grouse will order you to hunt down and capture four people: Susan Lancaster from Tenpenny Tower, Red from Big Town, Arkansas from the Minefield and Flak from Rivet City. Only Flak isn't tied directly to any other quests, so you might want to consider choosing him to be your primary target. Susan may come in handy during Tenpenny Tower quest, Red needs to be rescued from the supermutants in order to fulfill Big trouble in Big Town assignment and Arkansas might have died during your first visit to the Minefield (Moira will request for you to visit this location while trying to complete The wasteland survival guide quest). You should also know that Arkansas is the only person from the list to be hostile towards you by default.

The most important thing for you to know about is that you should attack your target while there's no one in the vicinity. Fire once and press the action key to initiate a conversation. Choose the second answer from the list (screen) and you'll automatically make your target wear a collar. Now you'll have to order your victim to move quickly to Paradise Falls before he or she dies as a result of an exploding head. If your actions are noticed, try running away as soon as possible or remain unnoticed and wait for the situation to calm down. Go back to Grouse once you've captured your first slave. He will reward you with 250 caps and you'll receive a new collar from him. You can also ask him to let you in if you don't want to capture any other civilians. 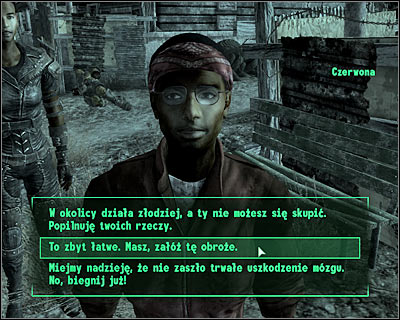