Musem of History: You gotta shoot 'em in the head

Solution: Mr Crowley is a ghoul and he can be found somewhere in the Underworld (he spends most of his time in Carol's place). Crowley will ask you to kill four men who don't like ghouls. He will give you their exact locations and you'll also find out that he can give you a bonus if they die from a shot to the head. In order to make this happen you'll receive a sniper rifle. I would recommend that you visit each person on the list in order to find out more about Crowley's true intentions. It turns out that he needs to get his hands on the keys and he doesn't care about anything else. Dave from the Republic of Dave is very helpful. Once you've acquired enough information go back to Crowley and if you're convincing enough he'll change his mind. From now on he'll only need their keys (screen), so you won't have to kill them. This also means you can ignore Tenpenny, because he's the only one without a key. 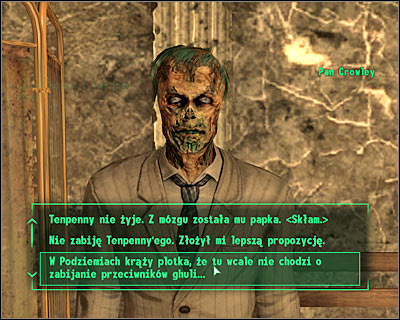 Your targets are: Allistair Tenpenny from Tenpenny Tower, Dukov from Dukov's Place, Dave from the Republic of Dave and Ted Strayer from Rivet City. Like I've already said, only three targets carry unique keys. In each case you can convince a target that he should hand over his key peacefully (screen). This can be done by winning a speech challenge or by offering a bribe. Alternatively you can shoot first and ask questions later, but obviously such actions would result in karma losses. I should tell you that the keys are needed to gain access to a secret lab hidden in Fort Constantine.

As for Allistair Tenpenny, you must execute him if you want to follow Crowley's instructions, however you shouldn't be surprised to hear that the old man will offer you more money (200 bottle caps or more if you use speech) for Crowley's head. The quest can be ended with Crowley's death or after you deliver Crowley all three keys from other targets (they can either be dead or alive). You can lie to Crowley that you've killed someone even if you allowed such a person to live.

If you want to find out more about why Crowley needs all the keys so much go to the second chapter of my guide and read the description of Fort Constantine. Thankfully, even if you give Crowley all the keys and end the quest you can still kill him and take back your possessions. I wouldn't recommend attacking him while he's still in the Underworld, because that would make other ghouls hostile towards your character. You can wait for him to leave the Underworld and shoot him in the main hall of the museum or you can follow him to Fort Constantine and assassinate him there. 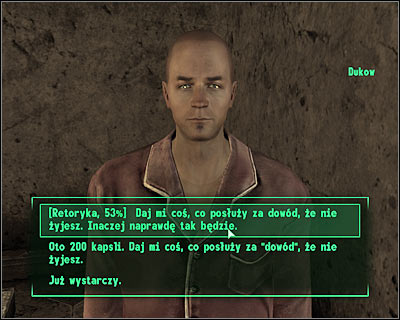