Received from: automatically after finding a clue about replicant's existence or from Doctor Zimmer [Rivet City - science lab]

Solution: The most obvious way to begin this quest is to talk to Doctor Zimmer. You can find him in the science lab located in Rivet City. I assume that you'll find clues of android's existence long before you take trip to Rivet City.

Here's a list of places and non-player characters who may have some information concerning the android: Megaton - clinic (Doctor Church), Megaton - Craterside Supply Store (Moira), Megaton - Nathan's and Manya's home (Manya), Rivet City - upper deck (talk to Doctor Preston about face reconstructions, you can also go and look for Sister), Rivet City - Rivet City market (Seagrove Holmes - you have to be persuasive or give him a bribe to find out about Pinkerton), Little Lamplight (Lucy), Little Lamplight - gift shop, Paradise Falls (Grouse), Paradise Falls - Cutter's clinic (Cutter), Paradise Falls - Eulogy's quarters (Eulogy), Tenpenny Tower (Herbert Dashwood and Doctor Banfield), Big Town (Red), The Underworld - Chop shop (Doctor Barrows), The Underworld (Winthrop), Citadel (Scribe Bowditch). Thankfully you won't have to visit all these locations nor to ask all related NPC's. I would recommend that you stop your search once you find out that Pinkerton might have more information concerning the replicated man. You'll find about this during your stay in Rivet City.

I should also tell you that you'll find a lot of holotapes in some of these locations and you can listen to the recordings to find out more about the android. One of these tapes in possession of Doctor Zimmer. You can also report to him each time you've found out something new, but he won't reward you for small finds.

During your stay in Rivet City you may also find Victoria Watts. She will propose an alternative solution to the android problem (screen). Victoria will give you an android part and suggest that you should show this object to Zimmer, convincing him that the android has been destroyed. You can find out more about Victoria and her organization if you want to. If you decide to comply with her wish, show the part to Doctor Zimmer and you'll end this quest with only 50 bottle caps more in your inventory and not knowing who the android really is. 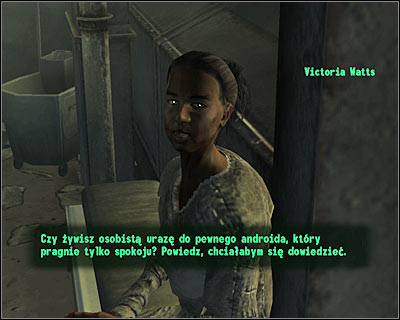 Finding out who the replicated man is:

It's going to be much more interesting if you decide to find out the true identity of the android. In order to do that you must find Pinkerton, because he's going to be mentioned by a few people. Check the second chapter of my guide (description of Rivet City) if you want to know how to get to get his hideout. During your conversation with Pinkerton ask the old man about face reconstructions and about android's memory losses (screen). You'll find out that he goes by the name of Harkness. Pinkerton will give some documents which are going to be proof to what he's saying. He'll also give you a code which will allow you to make the android remember everything again. You may go back to Rivet City. 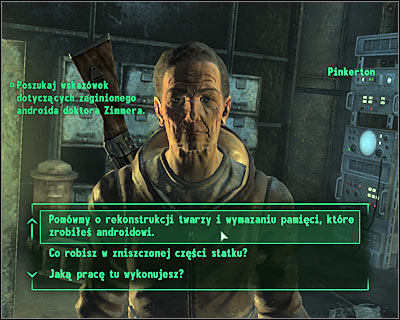 You now must make up your mind on how to resolve the situation with Harkness. First of all, you can go to Doctor Zimmer. You can show him the fake part received from Victoria or you can tell him that Harkness is the android. If you choose the second option, you'll be rewarded with a perk called Combat module (easier fights using V.A.T.S. system).

If you decide to approach Harkness, you'll be presented with a larger number of possibilities. Your first task is to convince Harkness that he's an android. You can do this by showing him the documents received from Pinkerton, as well as holotapes collected in the past (optional). That's not all. Using Pinkerton's password you may bring back his memories and that'll be more than enough to convince him. As for his future, you may persuade him to leaving Rivet City once and for all, killing Doctor Zimmer, allowing you to kill Doctor Zimmer, remaining as Zimmer's puppet (this will unlock Zimmer's rewards) or remaining hidden amongst the human population. If you do this right, Harkness is going to reward you with an extremely powerful A3-21 plasma rifle (screen). I would recommend to use this weapon only against strongest monsters, because it's not going to be easy to find something equally powerful and it'll take a lot of skill to repair this weapon. 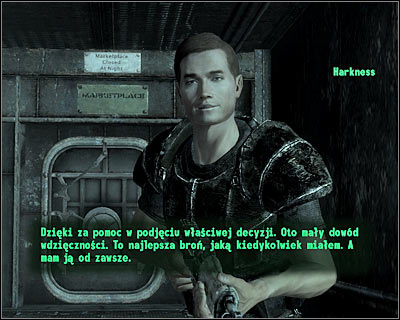