Solution: You can agree to help Moira write the survival guide during your first conversation with her. First of all, you will have to share your knowledge with her, because she'll be curious how was it to spend your entire childhood locked inside Vault 101. In exchange for your knowledge she will hand you over a very cool jumpsuit. Now you may proceed with the first part of this mission. I have to warn you - it's the longest quest in the entire game. It's been divided to three parts which represent separate chapters of Moira's book.

Important! You can persuade Moira to drop this project, however this is only possible if you've done at least one task for her. You must also have a high speech skill in order to have some chances in succeeding. If you convince her she will reward with a perk, called Dreamcrusher. I strongly recommend that you help her out, because not only you'd miss out on a lot of interesting adventures but you would lose a chance to gain experience points and receive valuable rewards.

Let's start with something very simple, shall we? Moira will ask you to find out more about the negative effects of radiation. If your science skill is high, you can answer to a number of questions and you'll get the job done. I wouldn't recommend doing that, because you won't be given an opportunity to fulfill an optional challenge for this assignment. As a result, you should listen to her plan and agree to it. Leave Moira's store and get down to the crater. Stand in the water (screen) and wait until you've received at least 200 rads. If you want to receive a reward for an optional objective you'll have to be more patient, because the limit here is 600 rads. You can check this in your Pip-Boy or you can wait for a confirmation to be displayed on your screen. Go back to Moira once you've exposed yourself to enough radiation. Moira will heal you and she'll give you a few drugs (Rad-X and RadAway). If you completed the bonus objective, you will also be rewarded with a cool perk, called Rad Regeneration. From now on each time you expose yourself to enough radiation your limbs will heal automatically without having to visit a doctor. 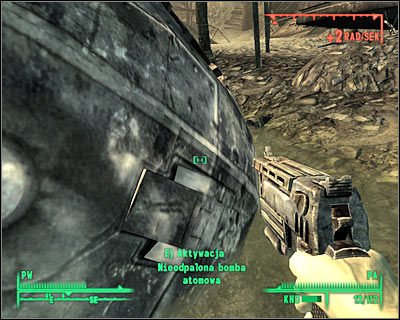 In order to fulfill this particular assignment for Moira you must travel to a location called the Minefield. The name clearly suggests that you must be extremely careful, because there are a lot of landmines in the area. Each time you've gotten close to a mine you will have about two seconds (depending on your explosives skill) to disarm it (screen) by looking at it and pressing the action key. Notice that you've been presented with a unique opportunity to score some extra cash. Each landmine is worth 25 bottle caps and even if you don't want to sell it, you can use it against your enemies. Watch out for areas where there are more mines in close proximity, because you may trigger one of them by mistake. As long you're careful and save your progress often you should be fine. 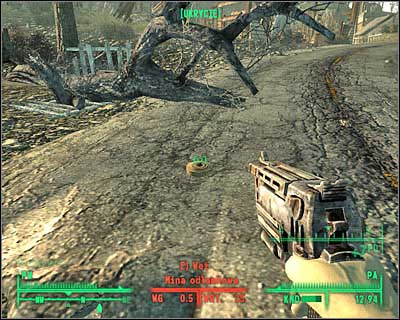 Aside from the mines, you will also have to watch out for Arkansas. He's a sniper and he'll be using his sniper rifle to hunt you down from one of the destroyed buildings (screen). You will find him near the playground which will make your job more difficult, because you'll have to go there to fulfill the main part of the quest for Moira. Try approaching that area from the other side. You can also surprise him and kill him. Don't forget to take his gun. You can also inspect the highest floor of the building he was hiding in. There are a lot of ammo crates there.

Ignore Arkansas if you don't want any trouble, because he's a part of Strictly business subquest. Killing Arkansas won't cancel that quest, but you won't be able to receive a reward for capturing him. Either way, go to the playground and retreat after receiving a confirmation and picking up at least one landmine. Go back to Moira and present her with a new toy. You will also have to answer to a few of her questions. Moira will then give you a couple of frag grenades, as well as a schematic for a bottlecap mine. 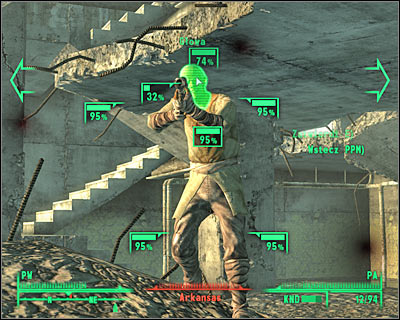 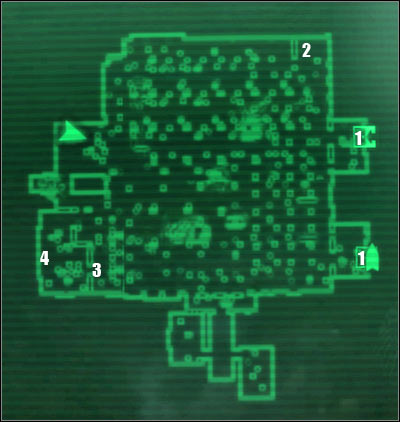 The final assignment for the first chapter of Moira's survival guide is to visit a nearby supermarket in order to find out whether you can find food and medicine (optional) inside the store. Leave Megaton and begin your journey towards Super-Duper Mart. Be careful, because you may encounter a single deathclaw, as well as raiders outside the supermarket. You can use one of two available entrances (1 on the map). Once inside the Super-Duper Mart you'll come across even more bandits. Raiders are well equipped, so you should visit this place only when you've acquired decent guns and a good armor. If you don't want any trouble just head over to the northern part of the store (2 on the map) and after finding some food (screen) you will fulfill the main objective. 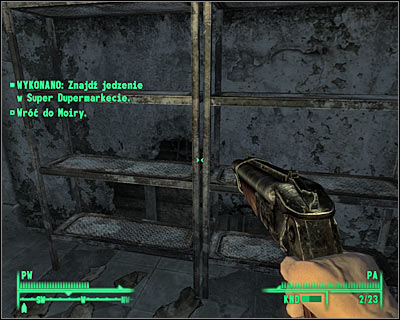 If you want to complete the side objective as well you will have to secure the entire store. Be on a look out for valuable items - landmines, stimpacks and ammunition. Obviously you will also have to dispatch of a lot of raiders. Proceed to a computer terminal (3 on the map). You can hack into the system with your science skill. This will allow you to unlock the door to the back room. If you aren't good at hacking computers, try opening the door with your lockpicking skills or look around the store for a key. Either way, you must unlock this new area. Proceed to the western wall and you'll find a first aid box on the wall. Inspect this object and you'll fulfill the side objective. Sadly, more raiders will arrive inside Super-Duper Mart in the meantime. The easiest way to get rid of them is to use a second computer terminal (4 on the map). Once you've successfully hacked into the system you will be allowed to activate a friendly protectron (screen). This robot probably won't kill all the raiders, so you'll have to deal with the remains yourself. Exit the store and go back to Moira. She will give you a few iguana bits, as well as a food sanitizer. There's also a second reward for completing the chapter of her book - a couple of stimpacks. 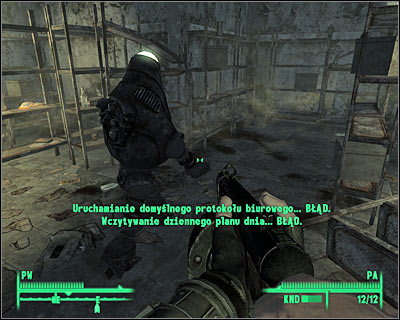