Solution: You will regain consciousness after a short while. Colonel Autumn will interrogate you in order to extract the data needed by the Enclave. It's extremely important that you don't tell him the right code (216), because once it's been verified you would have been shot on sight. You can make him angry, though. Tell him a false code and you'll soon find out that there's one Enclave soldier less for you to fight with. You can also ignore Autumn entirely by not giving him any straight answers, because he'll talk to president Eden soon enough.

I guess you might be a little surprised by the fact that Eden has ordered Autumn to release you. The first thing you need to do is to reacquire your equipment. Open the nearest locker, put on your armor and reassign shortcut keys to your favorite weapons. Once this is done you may try leaving the room, however you're going to be stopped by one of Enclave officers. There are many different ways for you to deal with this problem. The easiest ways to get rid of him are to be charismatic, threaten him with brutal force or win a speech challenge (screen). If all of this fails you can kill him with one of your primary weapons or you can bribe him and in exchange he'll leave you alone. Aside from the outcome you should remain where you are for a little while. Wait for Eden to give an order by radio to all Enclave troops that they should leave you alone. You could engage Enclave soldiers right away, but as you see it's not necessary at the moment. 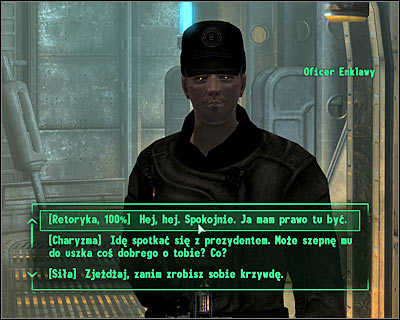 Raven Rock may seem like a large maze, but there are a lot of maps which will provide assistance in navigating your way through this base. Raven Rock is divided into three levels. Your current objective is to get to the second level of the complex, however you can also spend some time exploring level three (including chatting with one of your friends from Megaton). Avoid the areas under the catwalks, because there are radroaches out there and you would also have to deal with laser traps. When you try to leave level three you will hear colonel Autumn over the radio (screen). It looks like he's disobeying Eden's order, because he just told everyone in the base that you're considered to be a threat. Sadly, this means you'll have to be very careful from now on, because a lot of Enclave soldiers will stand in your way. You can ignore the scientists entirely, because they're not armed. Focus on eliminating soldiers. At least one of them wears Tesla armor and Tesla helmet. Steal those things. You should also be on a look out for plasma rifles and ammunition. Furthermore, there are Enclave crates scattered throughout the entire base. Make sure to open each crate, because they contain extremely valuable items, including plasma grenades. Use one of two available passageways to get to Raven Rock - level 2. 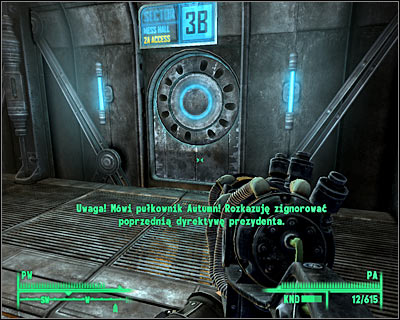 It doesn't really matter which door you've decided to choose, because you'll end up in section 2A. There are more laboratories here which is a good thing, because there aren't too many Enclave soldiers in the area. Still, you must prevent them from surprising you, especially since their weapons can inflict massive injuries. Head over to the next zone - 2B. If you decide to explore all surrounding rooms, you will come across Anna Holt. Maybe you remember her from your last stay in Rivet City. She also accompanied you to the Jefferson Memorial. It turns out that Anna is working willingly with the Enclave. The best solution here is to ignore her, because she won't give you any valuable information and you won't achieve anything by killing her. Keep heading north. Be careful, though. Two Enclave soldiers will leave the eastern room (screen). Use a rocket launcher or even a fatman to kill them without having to worry about them fighting back. There are more Enclave crates in this area, but a strong force field blocks access to them. You can resolve this by hacking into a nearby terminal and deactivating the field. You should also inspect Autumn's quarters, because you will find a very interesting item - bobblehead - energy weapons. Collecting this figurine will allow you to increase your energy weapons skill by 10 points. 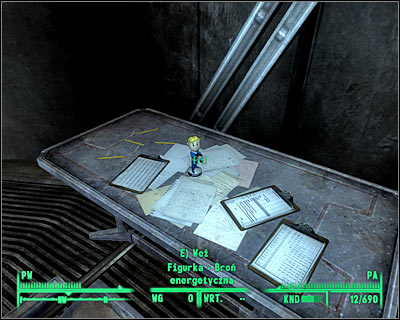 Proceed to a small corridor leading to section 2C. Your next objective is to find a door leading to Raven Rock - control room. Once you've arrived at your new destination, you will notice that friendly sentry bots are fighting with Enclave units. Obviously you should help the machines in getting rid of the foes, especially since they won't be able to kill all Enclave soldiers on their own. Proceed to the northern section of the base and you'll end up in sector 1A. After reaching a large room use the stairs and proceed to the highest level.

You will be given an opportunity to talk to president Eden who is an... intelligent machine! This conversation can go many different ways depending on the answers you'll decide to choose. First of all, you can convince Eden to self-destruct (screen). You can achieve a similar effect if you choose answers based on your high intelligence. Eventually Eden will make an error and won't be able to give you a straight answer. Alternatively you can agree to his proposal and for him to continue functioning in that from. Even if you plan on staying on the good side you should listen to his plan to eliminate all beings with traces of mutation in their bodies. 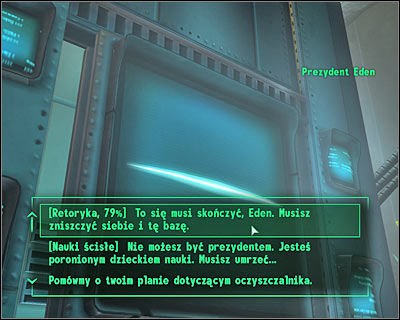 Notice that a large vial of FEV virus has been ejected from the computer. Pick it up even if you don't want to cooperate with the Enclave. Don't worry, because you'll make your final decisions when the time is right. For now you must focus on leaving Raven Rock in one piece. Choose a nearby hatch to get to Raven Rock - level 1. Just as before, large groups of Enclave soldiers will stand in your way. The good news is that you'll have robots and defense turrets on your side, so it should make these fights a little easier. Be on a look out for a shipping container along the way. You can hack into one of the terminals to open the container. There's a deathclaw inside the container (screen) and the creature will help you in getting rid of enemy units. Keep heading towards section 1B and finally you must proceed to 1A. Don't forget to deactivate a new force field along the way, because this will allow you to inspect several other Enclave crates. It's very important, because one of the crates contains a powerful Gatling laser. As for the enemies, watch out for the final Enclave soldier. He's carrying a rocket launcher, so he should be considered a serious threat. Keep going forward until you can travel to Capitol Wasteland. 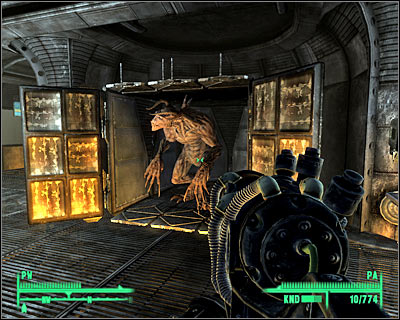 If you rescued supermutant Fawkes during the previous main quest, you will now notice him shooting at Enclave soldiers in front of the Raven Rock facility (screen). I'm sure that you'll be thrilled to see him, especially since he'll eliminate most of the targets for you. Also, if you're playing as a good character he can start travelling with you as your new teammate. I'd strongly recommend that you agree to his proposal. Not only is she powerful and strong, but he also carries a Gatling laser. As for Raven Rock itself, move back to a safe distance if you ordered Eden to self-destruct, because a large explosion will take place here. You will also have to avoid vertibirds, but the pilots should be focused on other activities.

Your final goal for this quest is to go back to Citadel. It shouldn't be a problem, because you've been there before, so you can fast travel. Enter the courtyard and find Elder Lyons. If you're having difficulties finding him, try searching for him in the lab. 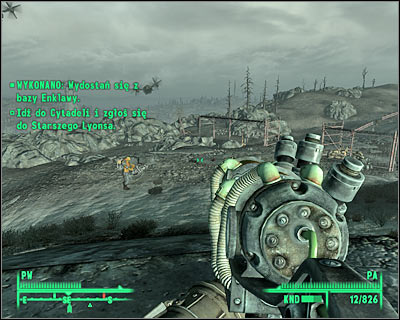