Solution: It doesn't matter which passageway you've decided to choose, because you'll end up standing inside a Reactor room. I guess you won't be surprised to hear that the surrounding area is being patrolled by supermutants (and also by a few radroaches). You can focus on eliminating all of them or you can get to an exit as soon as possible. Your next destination is Vault 87 - crew quarters. Once again, you will have to shoot your way through enemy patrols. Not much will change here since you've entered this vault. Use the stairs to reach upper levels of this structure and eventually you'll get to a door leading to Vault 87 - lab. Be on a look out for ammo stashes, hidden rooms and locked safes. Opening most of the locked rooms will require high science and lockpicking skills, but you'll be rewarded with a lot of useful items. Watch out for a larger group of supermutants (screen) you'll encounter on your way to your current destination. Use a minigun or a rocket launcher to get rid of them. 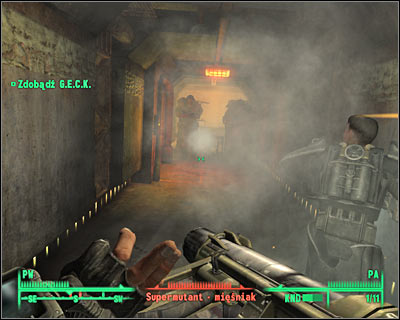 Once you've reached the science lab you will encounter even more supermutants. I wouldn't recommend moving too fast, because you wouldn't want to be surrounded by a larger group of these creatures. There are also a few centaurs in the area, but killing them is always very easy. Eventually you should be able to get to the test chambers. You won't have to inspect every chamber, but it's possible. Keep heading forward until you get to isolation rooms. Check the left isolation room (screen) and you'll encounter a friendly (yes! a friendly!) supermutant named Fawkes. Talk to the creature through the intercom and you'll find out that Fawkes will help you in finding the G.E.C.K. if you decide to release him. You may allow him to live but without helping him, you may kill him from where you stand or you can agree to free him. I would strongly recommend that you rescue him, especially if you're playing as a good character, because Fawkes will be able to join you as a teammate in the near future. Check other isolation rooms if you want to before making your final decision on what to do with Fawkes. 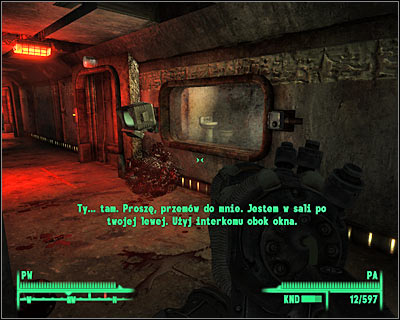 You can open the isolation rooms by hacking into the central security terminal and choosing a correct option from the main menu, or by approaching a large fire console (screen). If you press one of the buttons you'll hear an alarm and all the isolation rooms will be opened. Don't forget to kill the creatures from other chambers if you don't want to engage in an open combat. Go back to Fawkes. Once again, you may kill him or you may allow him to lead you to the G.E.C.K. Thankfully, you don't have to worry about Fawkes escaping him or turning hostile, because he's considered a good character. Obviously you will encounter more supermutants on your way to your final destination. Protect your new ally by attacking the creatures alone. There's a small room near the goal area. I would recommend exploring it if you have the proper skills to open the door. You will find a lot of medical supplies inside, but it's even more important to collect a radiation suit, especially if you're travelling without Fawkes. 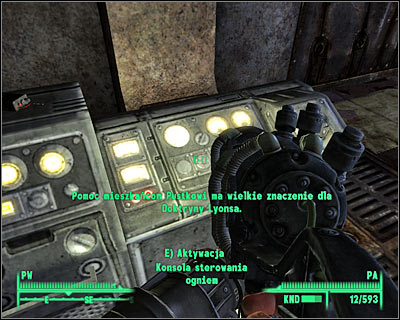 Eventually you'll have to get to an area located near radiated corridors (screen). This is where you'll have to make a decision on how to resolve the problem with the G.E.C.K. If you're travelling one, the only solution is to put on the radiation suit in order to increase your chances of surviving. You will also have take a few Rad-X's and RadAway's when you go back to the safe area. If you're accompanied by Fawkes you will only have to wait for him to get here. Fawkes will automatically go to the next tunnel in order to acquire G.E.C.K. 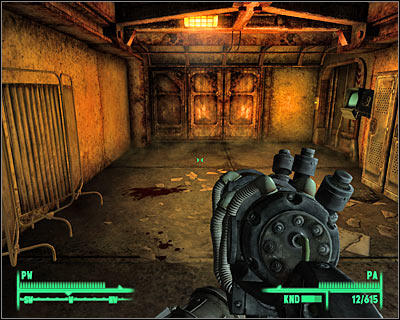 If you're travelling without Fawkes, you must turn right once you've entered the hazardous area. Run forward and don't stop at nothing, because you'll be dealing with an extremely large doses of radiation. Proceed to the left room and open a large container (screen). You will soon notice a large briefcase which is a G.E.C.K. Press the action key. DON'T activate the device, because you would have been killed on the spot. Instead, choose to take the G.E.C.K. Go back to the safe area.

If you sent Fawkes to acquire the G.E.C.K. for you, all you have to do is to wait for his return. He will hand over the device to you without any problems.

You may now start moving back to the surface. Sadly, you won't be allowed to leave Vault 87, because once you've reached one of the southern rooms you're going to be surprised by Enclave soldiers. Sadly you can't stop them from capturing you. Wait for them to transport you to Raven Rock which is their base of operations. 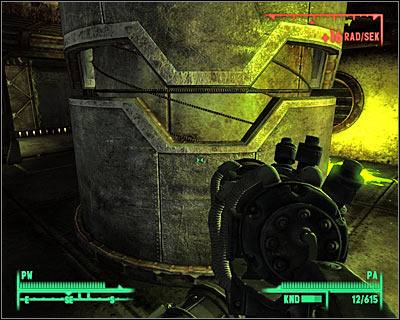