In order to open the enchanted gate keeping demonic Jack of Blades away from you, you will have to sacrifice three hero souls to the Archon Shrine. There are two completely different ways to accomplish this quest. The good solution is advised by Briar Rose, the evil one is to slay our respectable cast of NPCs. First things first, though.

1) The Master of the Arena - The shrine expects you to sacrifice a soul which can be described exactly this way. Briar advises you to pay Thunder a visit in Knothole Glade. He will tell you to go to the Arena itself. You can do it, but you can also kill our long-forgotten Whisper's brother. He hasn't learned much since the Lady Gray fight, so you shouldn't have any problems sending him to dust. Just remember that dodging and Will are essential in here.

If you want to be good to the very end, don't attack Thunder but follow his advice and go to the Arena. There you will face a similar battle like before, only this time with Minions and Summoners. Once you get rid of them all, you will obtain the first soul. Teleport back to the Archon's Shrine and talk to Briar.

2) The Heroine - Briar tells you to go to the cemetery in Oakvale and obtain the soul of your late mother. If you are evil, though, you will surely notice that Briar herself isn't a bad choice either.

Briar isn't very resistant to blows and focuses mostly on using Will powers. She can create false copies of herself to confuse you, but it's far too little for a hero of your abilities, isn't it?

If you decide to acquire Scarlet Robe's soul, teleport to Oakvale and go to the Memorial Garden. The cemetery is overrun with Screamers. You have to kill a certain amount of them to make everything back to normal. They aren't too strong, luckily. One or two hits gets every Screamer down.

3) The Oldest Soul -Your first guess is the Guild Master. When you teleport to the Guild, is appears that the old fella hid himself in Guild Woods. A young apprentice will tell you that the inscription might refer to the soul of Nostro, Lychfield Graveyard guardian. The choice is yours once more.

The battle with the Guild Master is in fact a fight between you and his numerous guards. He doesn't seem to be very trigger-happy himself. Once you defeat all of his protectors, you'll obtain the old guy's soul in one of the funniest cut-scenes in the whole game.

In order to face Nostro, teleport to Lychfield and go to the Circle of the Dead. The undead guardian will be glad to grant you his soul once you defeat him in honorable combat. This guy is initially invincible and you can make him vulnerable only by killing some skeletons surrounding him.

Go back to Archon's Shrine and go through the open gate. Expect the worst. 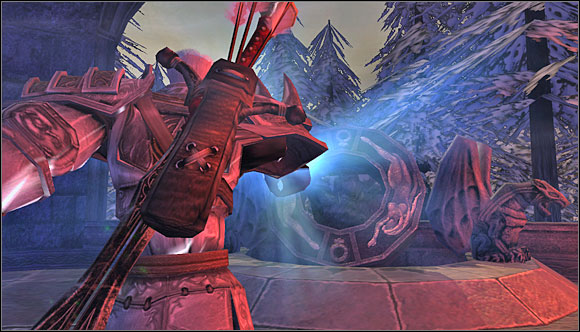