There's a cave on the western Oakvale beach, which leads to the bandit camp's entrance. You will have to sneak past the guards without being seen. Using the Sneak option (Caps Lock by default) seems senseless in here, as it's a lot easier to maneuver between them while normally running. You can also raise the alarm on purpose (approaching one of the guards) and hide behind a rock to the left of the gate. The guards will pass by and you'll be free to enter.

The next area will require some heavy fighting will a handful of enemies. You'll find some chests containing the Bandit Outfit around here. Complete the whole set, wear it, and continue to the east.

Once you're inside the camp, you'll have to get a pass in order to enter the inner circle. You can win it in Spot the Addition or buy it from one of the bandits. In Twinblade's Elites you'll find another gate which requires some kind of trick to go through. You can hire three assassins in black (southern part of the map) to form a diversion that will attract the guards or kill the bandit guarding the female slaves (south-eastern corner of the map) and release them. The effect will be identical: you'll be able to get into Twinblade's Tent.

After a short cut-scene you'll be facing Twinblade himself. The key here is to dodge his attacks and roll behind him each time he buries his blades in the ground. Hitting him then is the only way to harm the behemoth. He will be defeated after a few hits like that.

Well, the Seeress indeed has information about your sister - in fact, she IS your sister. She will grant you some family powers and then leave, and you will have to make a decision whether to kill Twinblade (evil) or just leave (good). 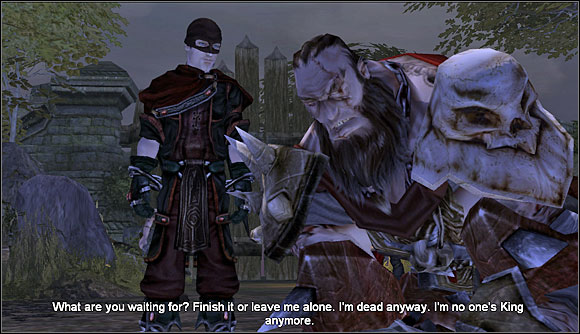