While developing your career in F1 Manager 2022, you need to take care of the Board's goals. Apart from that, you have to keep an eye on the team's finances. On this page of the guide you will find an overview of both of these mechanics - you will learn how to avoid team debt, what to spend the current budget on and how to ensure positive Board's assessment. 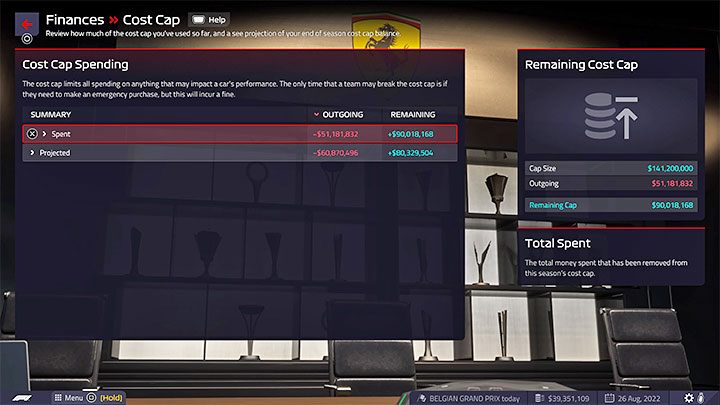 Both in real F1 and in F1 Manager 2022 there is a cost limit for a given season - it's $ 141.200.000. It concerns all those elements that are related to races and developing your team as well as improving car performances.

You can easily check the current status of expenses - it can be found in the Finances tab. There you will also find a forecast of expenses, thanks to which you can determine whether you will be able to stay within the budget or whether you will need to look for savings (e.g. dismissal of part of the crew or stopping any work on further car development).

The cost limit is only a real problem if you run a team with a large starting budget. In the case of smaller teams, the chance that you will get near the upper cost limit, enforcing drastic cost cutting, is rather low. 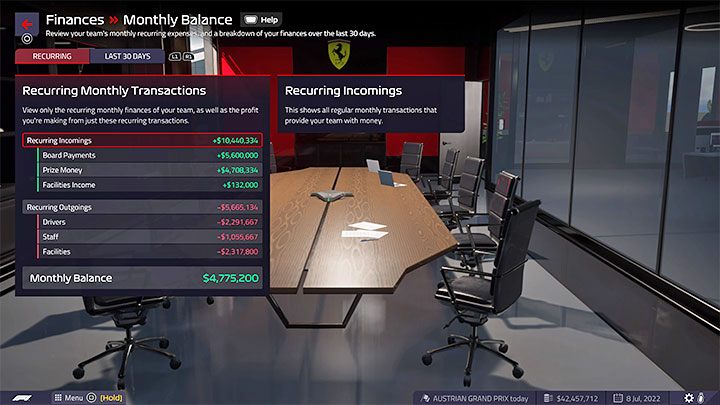 As befits a manager, you can keep track of your income and expenses in order to avoid unpleasant surprises. The monthly balance is more important, thanks to which you can easily spot any problems or excess cash. You don't have to remember to check the Finance menu because at the end of the month you will always receive an e-mail with the financial report.

The team's most important income is:

The team's most important expenses are:

Current expenses - what is worth spending money on? 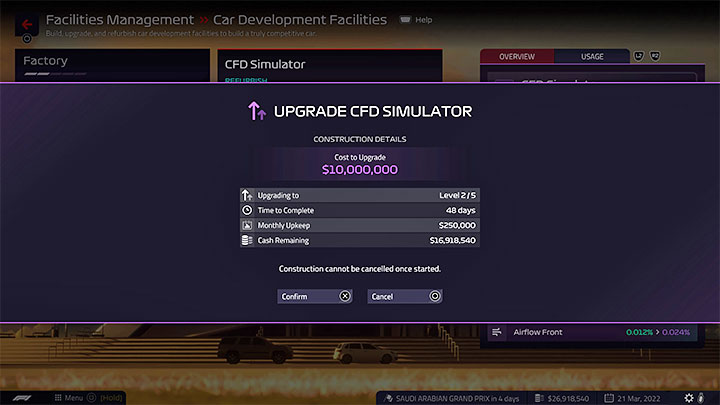 The most important piece of advice is not to perform too many expensive operations. Those include: 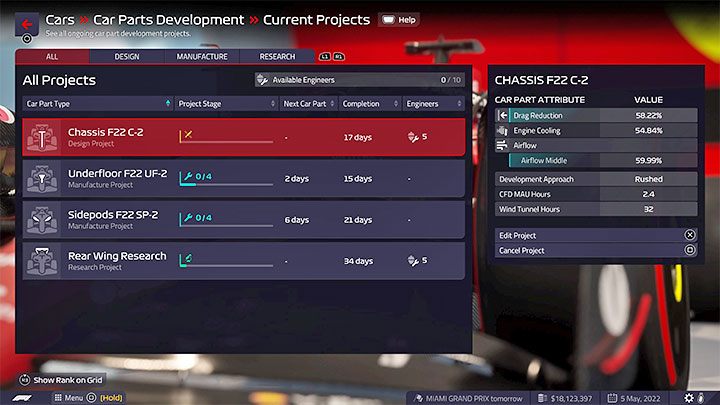 It is expensive to design and manufacture new parts, but you shouldn't look for big savings here because only with new parts can your car maintain or increase its competitiveness. Ignoring this can lead to your performance deteriorating compared to your competition and your results will get worse.

We recommend that you focus on quality, not the number of projects - ensure that you'll get hours of testing, assign a number of engineers and take into account an intensive design process that will improve the quality of finished components. Later in the season, look for compromises between the parts for the current and next season.

Have a stock of all types of aerodynamic parts - 4 pieces per part is in our opinion the minimum. It's worth producing two pieces faster and installing them on the cars right away and then producing the two remaining ones cheaper (and slower). 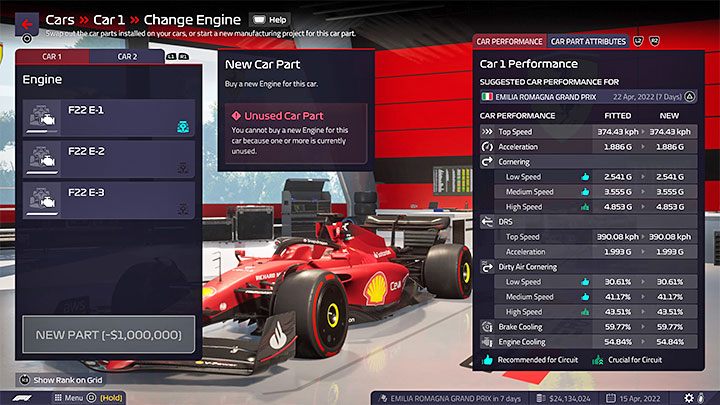 Excessive engines, ERS and gearboxes can put a strain on your budget. Each F1 team receives a limited number of them, which is supposed to be enough for a small season. Unfortunately, it is unlikely that you will manage and you might have to deal with at least 1 penalty for each of these parts and each of the cars.

Each additional part equals $ 1 million. You might accumulate quite a sum over the course of the season. 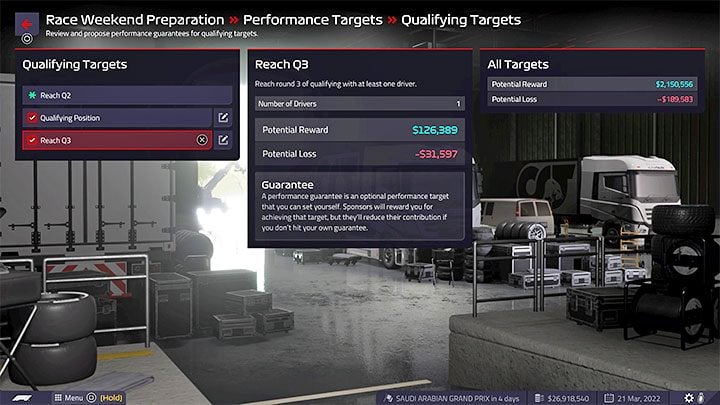 Always have at least a few million in reserve in your account. This will allow you to avoid being in the red and driving the team into debt, and at the same time you will be able to finance unforeseen expenses. These may include:

Seasonal goal and long-term goal of the Board 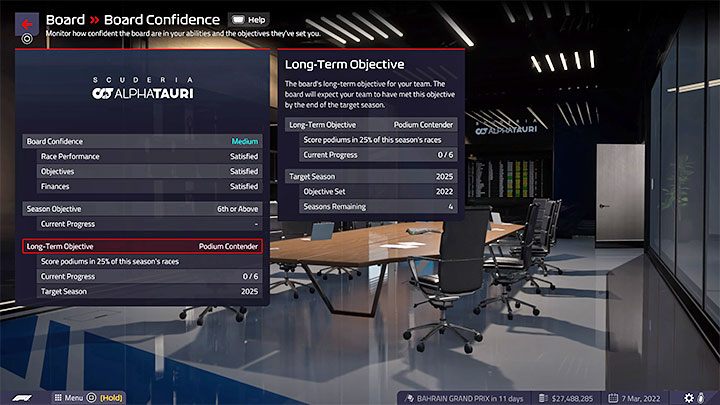 In F1 Manager 2022 you do not play as the team owner. As the team leader, you will be accountable to the Board, the actual owners. The Board always has certain expectations and their satisfaction influences the gameplay and the difficulty level in the later part of the career.

The Board always sets 2 types of goals for the leader to meet:

The Season Objective applies to the current F1 season - that is, if you're just starting off, it applies to the 2022 season. It is about ending the championship at least in the position designated by the board.

The Long-Term Objective must be met by the 2025 season - it means that you have several seasons to achieve it. Usually it is ambitious and involves, for example, regular point scoring with a car that is too weak for it at the start of the 2022 season. You can change this by developing your team skillfully and making their cars faster. 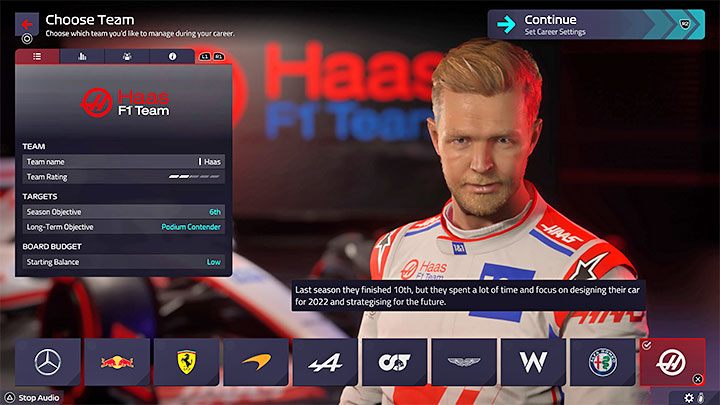 You can view both types of goals for the first time when starting a new career. They vary from team to team. You can think of it as various difficulty levels. For example, it is easier to win the championship by commanding a Ferrari than to ensure regular points scoring for teams such as Williams or Aston Martin.

We have described the seasonal and long-term goals on the Team Selection page. You will also learn how difficult it is to lead a particular team to achieving those goals.

Current trust and assessment of the Board 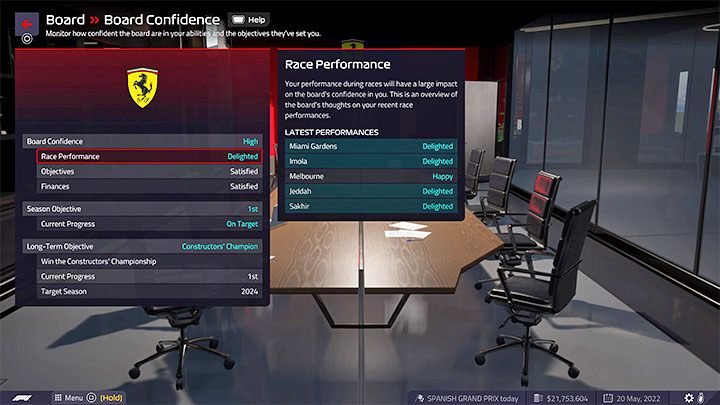 In addition to long-term goals, you must also ensure that the board trusts you (Board Confidence). There are three factors contributing to the level of confidence: 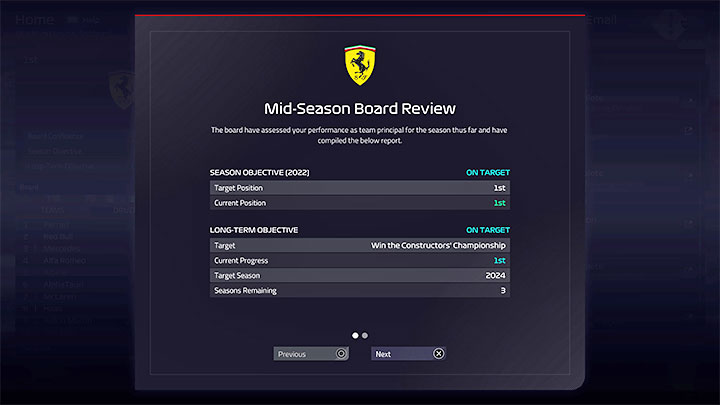 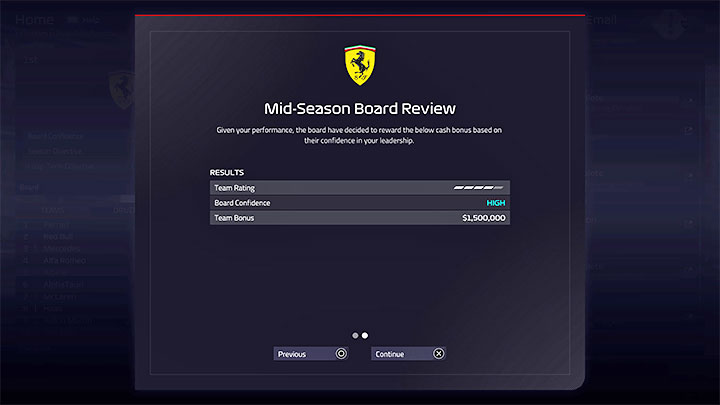 Board Review takes place mid-season and at the end of the season. The above-mentioned seasonal and long-term goals are analyzed as well as the Board's confidence.

The score determines the value of the prize that can be awarded to the team. Bad performances can lead to a prize reduction or its complete deprivation. Disastrous team performances may result in you being fired from your team leader position.