This guide is dedicated for people who just began playing in EVE Online Players who play more than several weeks will probably know most of things included in it. But the player, who is freshly after the basic training missions, may find here many useful information which allow him to find his own unique playstyle. As each player in EVE. What would you do if after several orders from your trainer, you'll get an order to fly out from the Academy and live on your own? When EVE Online was a younger game, you had less possibilities. As of the time being, after several dozens of expansions, the game's universe has became deeper, wider, more dangerous and interesting and that's why more unavailable for new players. EVE Online as a space simulator offers many paths for your character: from a noble man, through the space merchant to the explorer of new systems, mercenary and defender of the poor or a leader of the pirate fleet and a thief. Hundreds of constellations, thousands of systems, millions of enemies, billions of ISK to earn. And lose. Huge battles between player's alliances are the core element of the game and losses reaches tens or hundreds of thousands of dollars. Real, American dollars. If you want to grab at least 0,1% of this, immerse into the game which is visited daily by more than 50,000 players on one server.

In the guide to EVE Online you find: 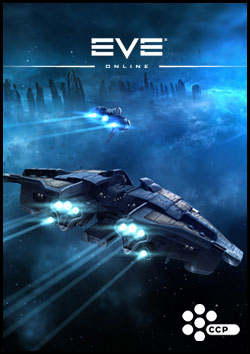 Quite Some Time in the Future in a Galaxy Rather Far Away
EVE Online is the forerunner of next generation massive multiplayer online role-playing games (MMORPGs) set in a world of galactic magnitude and governed by a hyper capitalistic economy.
In a universe of this scope, you are free to discover your own place, be it in the form of a humble trader ferrying goods from system to system, a despicable pirate preying on anyone foolish enough to cross your path, a heroic combat pilot lancing through the fray as you battle for your faction, or a mighty business icon leading a corporation with hundreds of employees.
To accomplish any or all of this, your main tools will include a diverse array of sophisticated equipment, spaceships, and social interfaces, but you’ll also need a strong business acumen, cunning combat strategies, and often pure Machiavellian thinking.
Constant Development and Expansions Included in Subscription
All of our resources are focused on further developing the EVE universe with the constant addition of features in the form of patches and larger expansions, all at no additional cost to the subscriber. EVE has a dedicated storyline team and full 24/7/365 Game Master support, along with an extensive volunteer system, the Interstellar Services Department, that includes bug hunting, new player guidance, events, and moderation.
- Truly Massive Universe where 50.000 players are living in a single universe with no sharding.
- Player Run Economy with 33 regional market systems.
- Unique Offline Skill Advancement with over 150 skills that allows for offline training.
- Free-form Professions ensures no limitations on professions. Be a trader, fighter, industrialist, researcher, hunter, pirate or a mixture of them all.
- Ships and Unlimited Customization with 100 different player ships and over 3.800 different modules.
- Player Research and Manufacturing where ships and modules fully manufacturable and researchable by players.
- Dynamic Tactical Combat with combat situations ranging from small skirmishes to 100 player fleet battles.
- Extensive Player Interaction with 5.000 Player corporations and player alliances create a unique and intense political environment.
- Unique Character Creation featuring 10 bloodlines in 4 races ensures every characters portrait truly is unique.
- Detailed Player Corporation Management
Players can group them selves in Player corporations, corporations divisions and gangs.
- Faction and Agent System with 20 NPC Factions and 170 NPC corporations containing a mission system with over 5600 NPC Agents to interact with.
- Encounters in Space with 5.000 solar systems and 5.000 stations, 14.000 stargates, 43.000 planets and 230.000 moons in 40 different regions.
- An extensive communication system including EVE Mail, private conversations and player created channels.
- Over 250 types of in-space NPC's including pirates, law enforcement, civilians and convoys.
- Access to EVE Insider, a special subscriber only website.

Contrary to popular belief, there are games in which players don't actually want spoil your fun all the time. Here's a list of network-oriented titles you can play without constantly listening to offensive remarks insulting members of our families.

Beyond World of Warcraft Classic  10 Most Hardcore MMORPGs out There

MMORPGs are the domain of hardcore players  to achieve something, you not only need to know the ins and outs of the game, but also pack hundreds of hours into it. Here's our list of the most hardcore titles you can play today. This site is not associated with and/or endorsed by the Simon & Schuster Inc. or Crowd Control Productions. All logos and images are copyrighted by their respective owners.