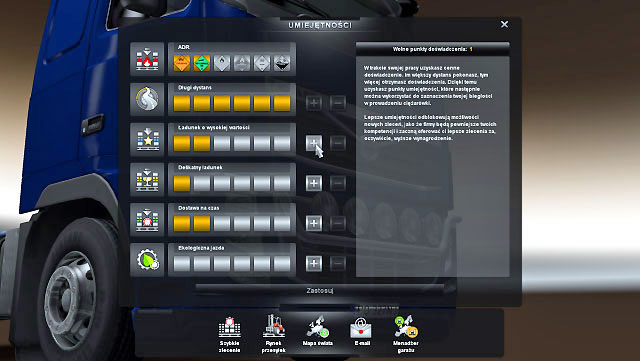 Remember that at the beginning, it is easy to level up. You start with level 0 but the first order should change that. Later you have to drive significantly more kilometers to level up (EXP bonuses will be helpful). When you "build" your driver it is worth focusing on particular skills. If you want to have a versatile driver, he/she will be average in each area.

Such skills as valuable cargo, delivery on time or fragile cargo open access to special shipments. Invest at least one point in each to see such orders on your list. At the beginning do not limit yourself to only one skill. With higher levels, these skills give very interesting bonuses. Later, you can focus only on one.

ADR is a separate category. Unlike other skills, next levels do not provide any bonuses but they give access to other types of orders. These four skills (ADR and the three previously described) can be developed simultaneously, but sometimes it is worth to focus on two of them, e.g. ADR and delivery on time. Specialization provides higher bonuses. Later (20+ level) you can try to finish the whole skill tree by selecting the missing attributes.

Eco driving is totally different category. This skill should not bother you unless you have your own truck. Consider if it is worth investing any points (at least until the moment of reaching maximum level of other skills). Instead of cutting costs (which is hardly noticeable) better focus on other skills which allow for earning more.