Before each raid in Escape from Tarkov, you have to make a decision - you want to play as SCAV or PMC? The differences between these characters are big, so it is worth learning more about them before starting the game. This page has all the differences between SCAV and PMC. You will also learn about the pros and cons of these groups.

Differences between SCAV and PMC 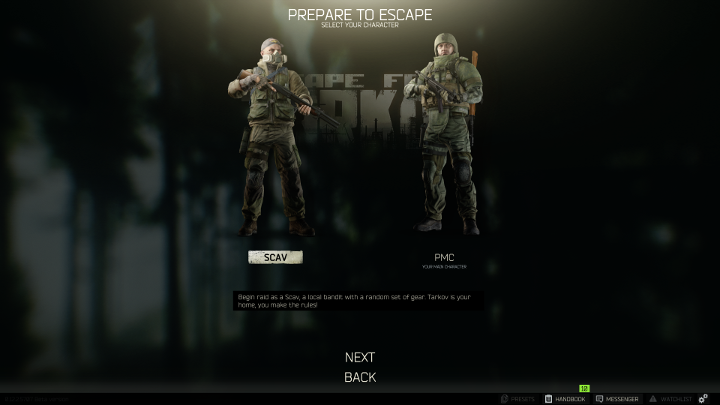 The most important information - your main character belongs to PMC. This means that all equipment (weapons, armor, or medicine) belongs to this character. The only way to use items that were purchased or obtained during raids is to play as PMC. This way you can prepare for a match by choosing the right equipment. On the other hand, if you die as a PMC, you will lose all items taken on the raid. The only exceptions are items stored in secure containers and insured gear.

It is worth adding that SCAV and PMC have different extraction points. Keep this in mind before moving on to the point used in a previous match.

SCAV characters start a raid with random equipment. You will get a main weapon and a few items. In this case, it is more difficult to win a raid, but dying as a SCAV doesn't have any negative consequences. You don't take your personal equipment on a raid, so you don't lose it after you die. Playing as a SCAV can be a good way to make money in Escape from Tarkov. Every time you win a raid, you receive loot. If you lose, you don't lose anything. The only limitation is the time - you can play as SCAV every 20 minutes.