The gameplay in Escape from Tarkov delivers a lot of emotions - mainly because the death during a raid means that you lose your equipment. Read our tips listed below to reduce the number of deaths - these tips will help you achieve victory and make the game more fun. This page contains the 10 best starting tips for Escape from Tarkov. You will learn how to prepare for a raid, as well as how to behave during the game.

We also recommend checking other pages: 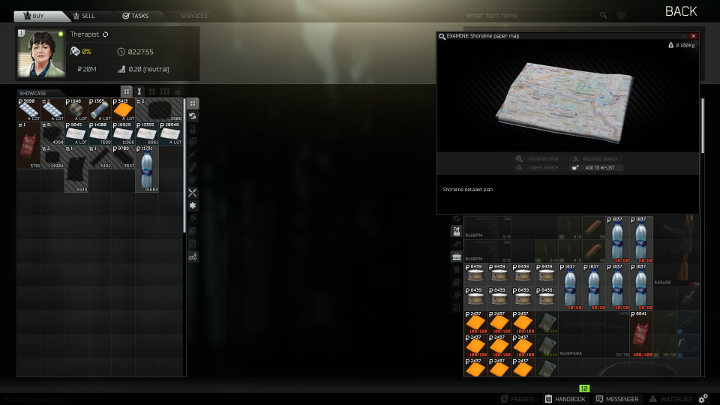 Maps are helpful in moving around locations.

Maps will help you get a better understanding of what is happening - you will learn where important places and extraction points are. You should study the maps carefully before starting a raid, but remember that you can also check the map during the game.

All maps in Escape from Tarkov can be purchased from the merchant named Therapist. At first, the map icons in the store are black. To change this, use "Examine" option on them - they will become available for purchase.

Remember about the basic inventory 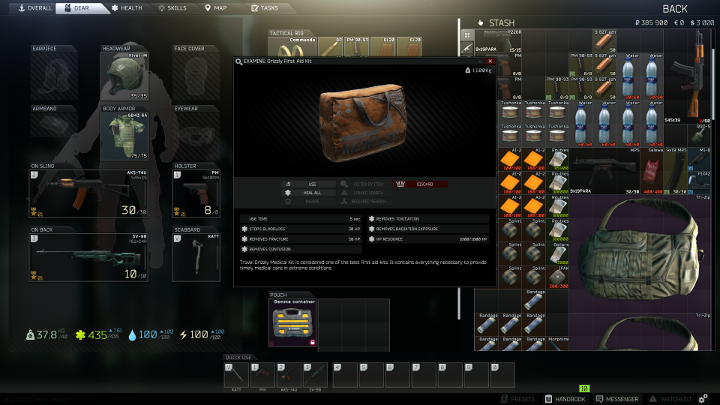 Take healing items with you on every raid.

Every raid requires preparations. The quality of your equipment depends on your funds and loot earned throughout the game, but you should always have a few basic items in your inventory. You must remember about ammunition, as well as the basic medicaments - a Medical Kit, a Bandage, and a Splint. You should also take water to avoid dehydration. Money is also useful - some maps have the option to unlock extraction points by paying money. 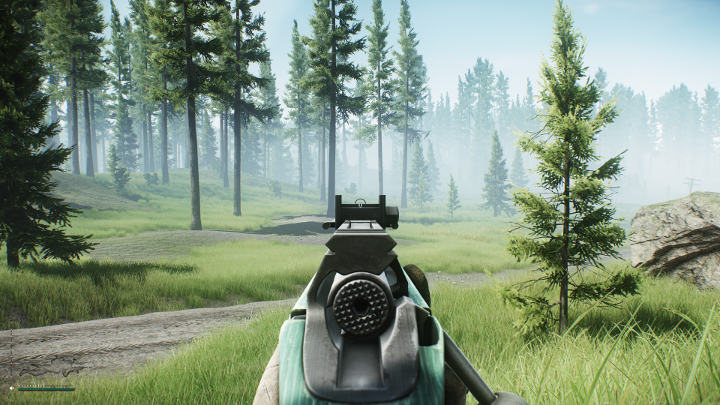 Sound is very important in this game.

Sound in Escape from Tarkov plays an extremely important role - you must constantly listen to what is happening around you (use headphones if you have the option). Focusing on the sound will help you find opponents - you can hear whether the enemy is injured or is running. You should also pay attention to the noise made by the doors.

You also need to be aware of the sounds made by your character. Move slowly as often as possible - the speed can be adjusted using the mouse scroll. Avoid getting injured. Injuries make your hero become noisy. 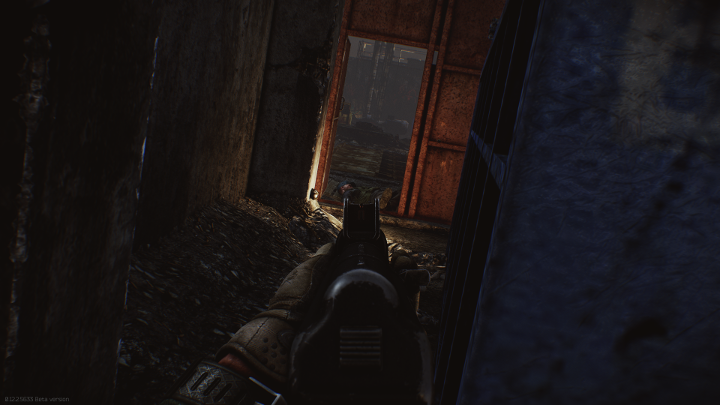 When you kill an enemy, the first thing you may probably want to do is to immediately search the corpse for items. Before you search the body, make sure that the area is safe. Look around and listen - maybe there is another player waiting for you. You will usually kill with a firearm - these weapons make a lot of noise. If someone is nearby, they will definitely hear you, so hold back a bit and check your immediate surroundings.

Use the hotkeys toolbar 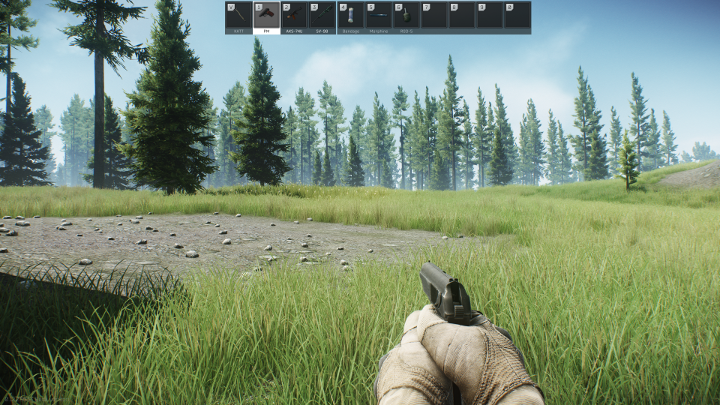 The hotkeys toolbar significantly reduces the time of using items.

Hotkeys are important if you want to play Escape from Tarkov effectively. Place the most important items at the beginning of a raid- bandages, medical kits, or grenades. You will be able to use them faster. This is especially useful during battles - instead of searching the inventory, you simply press a single button. 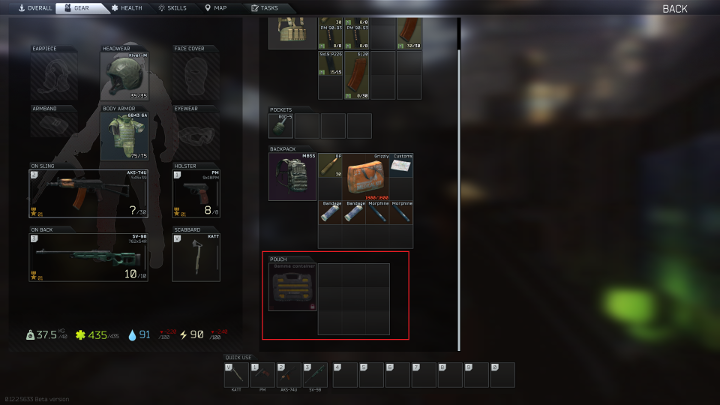 Secure containers ensure that items placed in them are safe.

Secure containers (Alpha, Beta, and Gamma containers) ensure that items placed in them will remain in your inventory even if you die. Use them to store the most valuable items. These can be items needed to complete a mission for merchants, or money.

Do you want to know how to get the best container in Escape from Tarkov? Visit a separate page called "How do I get a Gamma Container?". 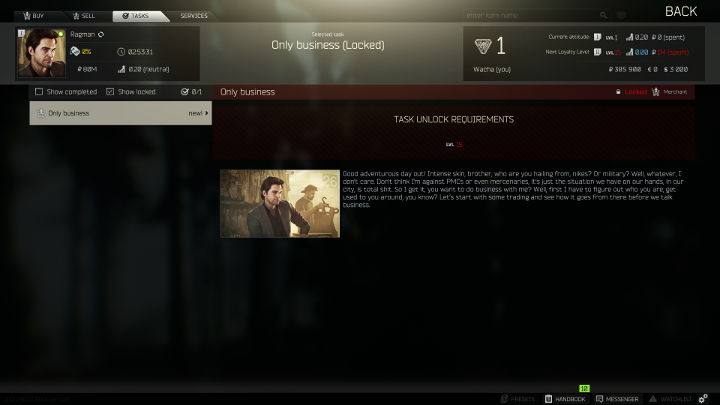 The gameplay in Escape from Tarkov isn't only about competing with other players, but also about completing missions for merchants. Open the "Tasks" tab at a merchant to start a mission for them (provided you meet the required character level). There are various goals to complete - you may have to kill a certain number of enemies, deliver weapons for the merchant, or get a certain item. Complete missions to get experience, money, and equipment - try to complete them as often as possible.

If you play as a SCAV, don't kill other SCAVs 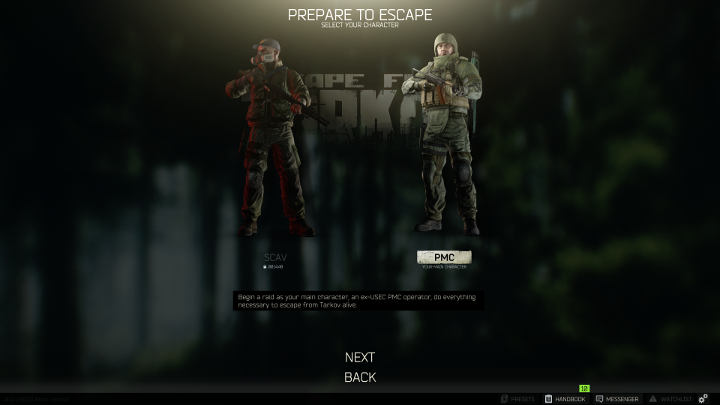 As a SCAV, you should stick to this rule.

Playing as a SCAV makes raids become less stressful - you don't have your own equipment, but you also don't lose anything when you die. However, you should stick to the unwritten rule within the Escape from Tarkov community - if you play as SCAV, don't kill other SCAVs. Violation of this rule isn't only related to the negative reaction of players - your character will be marked as a target for other SCAVs. 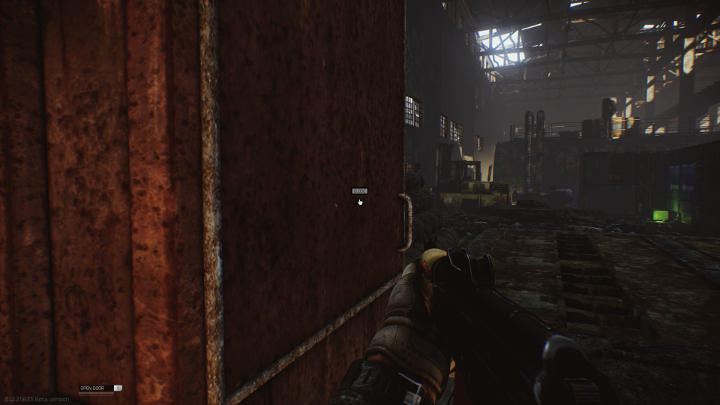 In most cases, closing the door is a good idea.

The advice may seem banal, but it greatly affects the gameplay. If you close the door behind you, you will be able to hear an opponent following you (doors make a sound when someone opens them). This way, you will avoid getting attacked from behind. In addition, a closed room or building gives the impression of being empty, which can be useful if you want to surprise an enemy. 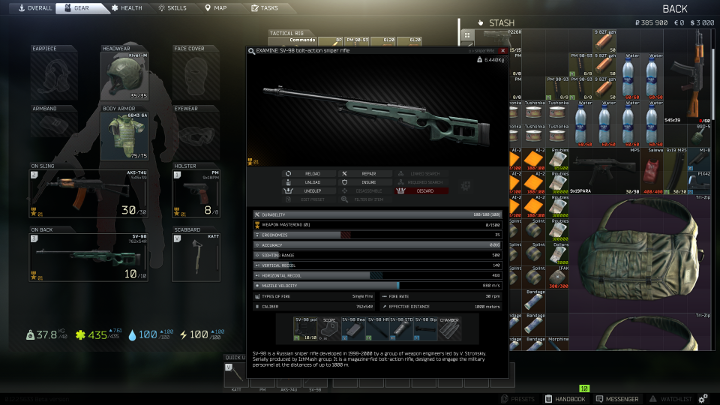 Losing your favorite weapon can hurt.

Equipment insurance gives you a chance to keep some items after death (you can insure items before starting a raid). Example - you insure your rifle. If you die, and the insured rifle isn't taken by another player, it will appear in your inventory. Of course, insurance usually doesn't work, but it is the only way to get your favorite equipment back.