The guide to Escape from Tarkov will help you escape from the titular city. Our compendium will explain all the survival elements found in this title. The first few pages of the guide focus on how to start and play Escape from Tarkov. Starting tips focus on the main mechanics of this production - moving around the map, fighting against other players, or using weapons and equipment. Our 10 best starting tips should prove useful in each raid. You will also find information about trading or of the health and damage system.

The FAQ section is another useful section. Here you will find answers to questions that may appear during your time with the game. How and where to find extraction points, SCAV or PMC, how to make quick money, BEAR or USEC, how to get maps or fuel - the pages dedicated to these questions will help you understand all the elements of Escape from Tarkov.

Maps with marked extraction points will extremely useful for all players. Our guide has maps of all locations along with escape points for the SCAV and PMC factions. Knowledge of extraction points is necessary to gain an advantage over other players - thanks to this, you will learn how to win in Escape from Tarkov.

The last few pages of the guide were devoted to the technical side of this production. We have described in detail the controls in Escape from Tarkov - check this page because the game uses a lot of keys. We also didn't forget about the system requirements, where, in addition to information from the developers, we have also included an overview of our hardware and specifications recommended by the community.

Escape from Tarkov in a nutshell 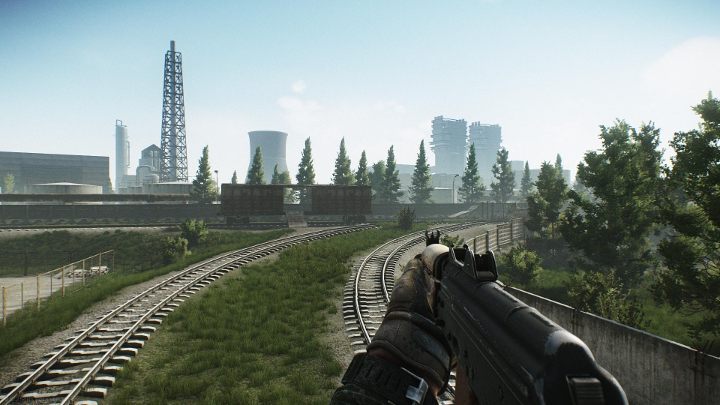 The views are fantastic, but it is hard to feel safe in Escape from Tarkov.

Escape from Tarkov is an online shooter with survival and RPG elements. The goal of the game is to escape from Tarkov. The action takes place on several different maps, where players take part in the so-called raids. The main obstacle in fulfilling this objective are other players. Each encounter with an enemy can end tragically - the game uses a realistic damage system meaning that even a wounded leg or arm can effectively hinder further progress. Another element that makes the matches fiercer is the fact that death leads to the loss of all items in our inventory.

Escape from Tarkov is a complicated and demanding video game. It's not only due to the online character of the gameplay, but also to the complicated solutions used in the game. Therefore, in our guide you will find pages which may help you during the first hours of gameplay:

After reading our starting tips you should check out the FAQ section. In Frequently Asked Questions section you will find answers to the most important questions that may arise during the gameplay. The following pages will enrich your knowledge about Escape from Tarkov and make the gameplay a lot easier:

Price and available editions of Escape from Tarkov

Many players are wondering how they can buy Escape from Tarkov. At the moment, the game is in beta testing, and the developers have prepared four different editions. Each edition of the game differs in content and price - you can get them on the game's official site. Below you will find the prices and the main content of individual editions of Escape from Tarkov:

Is Escape from Tarkov available on Steam?

Escape from Tarkov can only be purchased on the game's official page. Currently, the production isn't available on Steam, but it is possible that after the release of the full version, it will also appear on Valve's platform.

How to play offline? 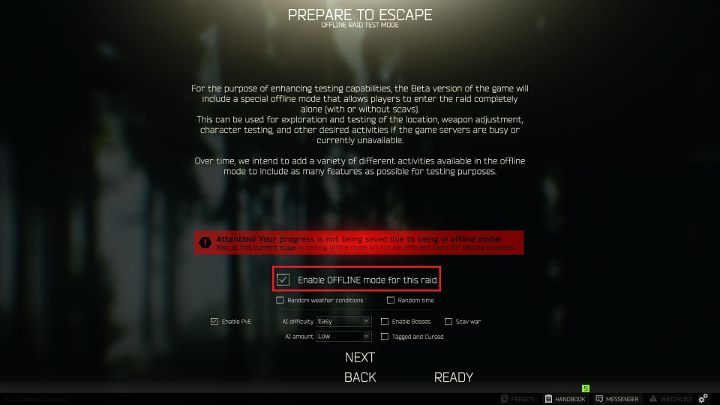 Simply choose the option marked above.

Offline mode is recommended for novice players - you don't lose items so you can freely explore the map and learn the basics of gameplay. Follow these steps to start the offline mode:

How many players are on the server?

Do I lose everything upon death?

If you play online (that is, with other players) and your character dies, you lose all items collected on the map as well as those you took with you for the raid - except those stored in special containers. Because of this, novice players are encouraged to play several offline raids with bots.

How do I add friends?

The online nature of this title encourages players to play together with friends. To add a friend in Escape from Tarkov, just click on the "Messenger" button in the lower right corner of the screen, and then click on the "Friends" button. You can enter a nickname and add a given player to your friends' list.

Will Escape from Tarkov be released on PlayStation 4 and Xbox One?

At the moment, the developers don't plan to release Escape from Tarkov on the PlayStation 4 and Xbox One. Currently, the game is only available on PC.

Controls in Escape from Tarkov

How to get started in Escape from Tarkov? First of all, you need to learn the controls. The detailed controls can be found on a separate page - below we have listed the most important keys.

System requirements for Escape from Tarkov

Will I be able to run Escape from Tarkov? The information below will help you find the answer. We also recommend checking the separate page dedicated to the system requirements of this game. You will learn more about the game's technical side.

About Escape from Tarkov Guide 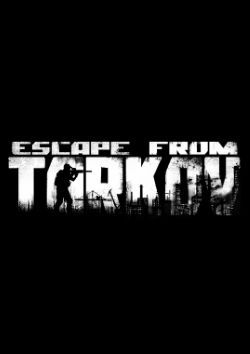 A MMO FPP/TPP shooter with RPG and sandbox survival elements, developed by Russian studio Battlestate Games. Players become the members of two rivaling military corporations, fighting on the territory of an abandoned Russian city.
Escape from Tarkov is a FPS/TPS MMO with elements of RPG and survival sandbox, in which players become members of two military corps, fighting each other in the titular Russian city. The game was created by Battlestate Games, a developer from Saint Petersburg, whose employees are not new to the genre, as they previously worked on such famous franchises as S.T.A.L.K.E.R., Mass Effect, and BioShock.

The game is set in a devastated Russian city of Tarkov, covering 16 square kilometers, sealed off from the world by forces of the Russian Federation and the United Nations. Players join one of two rivaling military corporations and fight for survival in this seemingly abandoned, although dangerous metropolis. Unlike many other popular MMO shooters, this game is accompanied by an interesting story. Players can engage in numerous special missions, jobs, and riddles that gradually reveal the mysteries of Tarkov.

Although the core of the gameplay is competitive team-based multiplayer, the game is not only about shooting. One of the characteristic features of Escape from Tarkov is the freedom to roam about the entire city, interact with non-player characters, and engage in a whole bunch of various activities. You can thus assault enemy bases, perform secret missions (on your own or with friends), or simply explore and collect items that can be exchanged with other players in special locations.

What is especially interesting is the games extraordinary character progression system, which accumulates several types of experience, depending on what type of activity you are performing. As you progress, you can master over a hundred diverse skills, split into four main categories: physical, cognitive, combat, and practical. The game also offers wide possibilities of weapon modifications and upgrades.

A crucial gameplay element is survival. It turns out that the city itself, with its unfriendly conditions and dangers lurking at every turn, is as deadly as enemy mercenaries. Your character can die not only by enemy bullets, but also due to injuries, illnesses, exhaustion, dehydration, or contamination from radioactive substances. This also means that you always need to have enough food, water, medicines, and other essentials in order to survive.
The production from Battlestate Games is an online game at its core, focusing on team-based competition for up to 64 players. However, the abundance of extra activities introduces a sandbox character into the game, making it accessible for both PvP enthusiasts and those who prefer to play solo in PvE modes.

Escape from Tarkov, released on PC, stands out from the crowd with its photorealistic graphics achieved with a modern 3D scanning technology of real-life locations (also used in Get Even, a game by Polish developer The Farm 51). The developers put great emphasis on realism of gameplay, evident in such things as accurate bullets ballistics, a full procedural effect system, absolute control of movement, interaction with environment, and advanced weapon and character customization.