Soldiers of this class perform a lot of tasks and have some cool abilities. Engineer/constructor can repair friendly vehicles, turrets and artillery guns, defuse enemy bombs and mines, construct bridges, GMPG emplacements, watch towers, etc. Besides, he can deploy antipersonnel and antivehicle turrets.

The most commonly used tool. Thanks to this little baby, engineer/constructor can repair, build and defuse bombs. In order to perform one of these actions, get close to an object, which interests us (bomb, damaged vehicle, etc.) and when a hand symbol will appear, press the action button start using the tool.

Only for Strogg constructors, who gained experience level 2 in their speciality. The characteristic thing about the flying drone is the fact that if you want to repair a certain object, you need to aim at it first, and then wait until the drone gets locked-on it (red marker in the picture below informs about the status of the tool). When it does, launch the drone by clicking the fire button. The flying drone will reach the damaged object, repair it and go back to its owner. The biggest disadvantage of this tool is its radius - only dew meters. The picture below shows the max. distance. 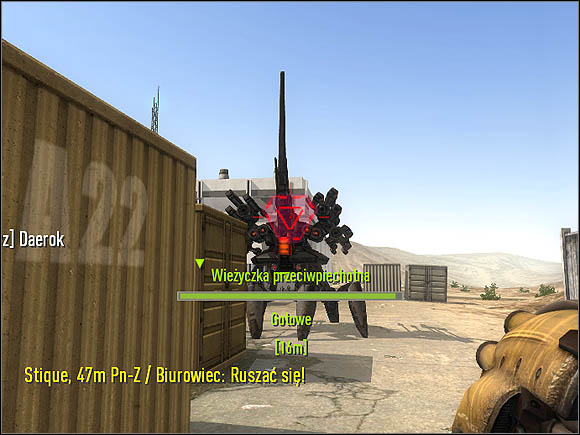 Equipped by warriors of both sides. Enables to call defence turrets to the battlefield. You can find more about it the Turrets, artillery, radars chapter.

Engineer/constructor can install at most three mines. Deploying more will make the oldest ones disappear. Mines work in two ways. To use the first one, click fire button to plant a charge and then arm it. The mine will just react when an enemy gets nearby. The second one (triggered with alt. fire button) turns on a laser - if someone gets through it, the bomb goes off. Laser mines can be installed only on walls.