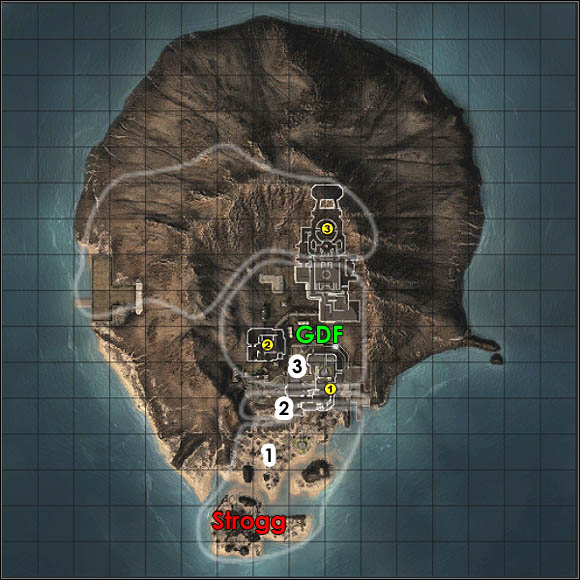 1. Strogg infiltrator must hack the security system to open the way to the transformer;

2. Aggressor must destroy the transformer with plasma charges;

3. In the last phase of the operation, infiltrators must destroy the geothermal core using drones.

GDF: Besides deploying the radar and the artillery, build GMPG emplacements located inside the bunkers (that's a task for engineers). Every shooter using GMPG must be supported by at least one medic. Moreover, a few soldiers should constantly patrol the bunker door, which the Strogg will surely try to blow up. Window located near the door should provide a nice vantage point. The group defending that entrance must be consisting of engineers, as only this class is able to defuse enemy plasma charges. Mines located in the vicinity of the security system panel should be quite useful too.

After breaching the defence line, the Strogg will surely try to destroy all installations deployed at the beginning of the fight (e. g. radar), so call in new deployables, in a new area. The transformer defence should be organized just as many other defences have to be done - medics and soldiers (some of them armed with GMPGs) should have an eye on every single route leading to the target. Once again, deploy some mines. I advise you to get acquainted with the transformer building's layout.

The last objective may become extremely difficult. First of all, you gotta be fast. The room, in which enemy infiltrators must turn on their drones should be literally full of mines. What is more, team members can hide inside this room in order to take incoming opponents by surprise. Not only you must be fast; accuracy is also essential here, if you want to stop Strogg warriors efficiently.

Strogg: At the beginning, infiltrators must hack the security system panel. The straightest way to it leads through bunker door, which is unfortunately locked. However, Strogg aggressors can use their plasma charges to open it. This is why I advise you to go to fight as an infiltrator or aggressor. That second class should not only concentrate on destroying the door but also on blowing up enemy deployables, like anti-personnel turrets, which the GDF team will place on the battlefield for sure. Infiltrators armed with sniper weapons should take care of soldiers at GMPG emplacements in the first place, and after that, they have to defend the plasma charge on the door - of course if it is possible. When the bomb goes off, infiltrators should - preferably in disguise - attack the security system. And don't forget about completing secondary objective 1.

In the next phase of operation, the team must be consisting of aggressors and technicians. The enemy has here a few good defence conditions, but rapid attacks performed by outstanding shooters combined with the technicians' support should do the trick.

When you capture the spawn point (secondary objective 3), go to the last GDF bastion on this island. A hole in the wall is a perfect way for infantry. In order to complete this target without trouble, the team must divide into two squads. The first one should intercept incoming enemy forces - that'll keep them distracted. The second group, made of infiltrators, must go directly to the room, where the ventilation system starts. You don't even need a disguise - it is possible to get through in the chaos made by the first group. Once you're in the room, find a hiding spot, start your drone, steer it through the ventilation, get next to the core and detonate it.