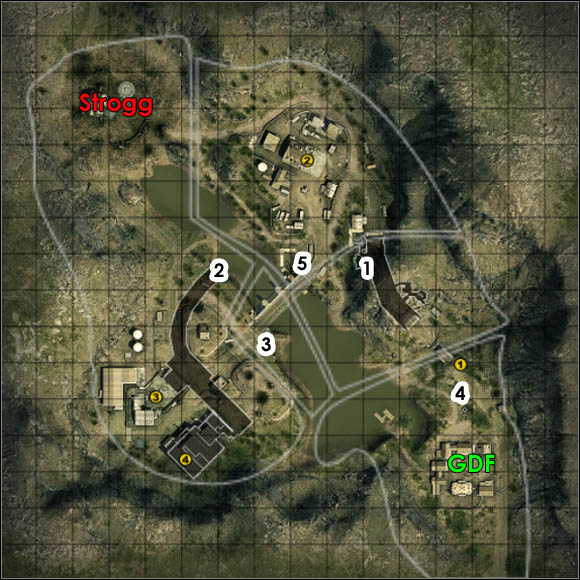 1. GDF engineer must build a bridge to let the MCP get to the central outpost;

2. Any GDF unit must drive the MCP to the central outpost;

4. The fourth target is the contaminator. GDF soldiers must destroy it with explosives.

GDF: This is a tough one. There are four targets, all of them difficult to complete. First of all, we need to construct the bridge, so the MCP will be able to get to the next part of the map. Engineers should do it, but they must supported by medics, vehicles and artillery - just throw at the enemies everything you've got. The opponents will try to get on your side of the bridge on foot, so be prepared for Stroggs popping from the forest. The Tormentor may be a trouble too, but Trojan with full crew should solve that problem. The enemy will deploy turrets on his side of the bridge and, in fact, the construction site is in their range, so engineers working there cannot feel safe. Vehicles and artillery should fight those installations. Soldiers with rocket launchers may attack them too.

Once the MCP is delivered to the battlefield, one of the players must drive it to the central outpost. Complete the secondary objective 2 on your way, so you won't have to march far. Once again, the enemy will set some turrets, a few vehicles and infantry to stop you and your teammates. Everyone armed with anti-vehicle weapons (especially soldiers) should take care of turrets and vehicles. Medics should do a fine job eliminating enemy infantry. And don't forget about calling air-strikes!

The next step here is the shield generator. In order to shorten the way to it, capture the spawn point (secondary objective 3). You can also open an extra route, through the tunnel (secondary objective 2). The enemy will probably set some mines, deploy turrets and send the Cyclops to battle. That is why the team must be consisting of many soldiers armed with anti-vehicle weapons. They can not only destroy defences, but also keep Strogg distracted. The rest of the team must choose a medic or a spy class. Spies may use a disguise to get close to the generator.

The last target is the contaminator itself. Building's layout, in which the device is places, isn't complicated, but better get acquainted with it. In this phase, tanks and artillery don't participate. Only infantry of two classes - soldiers, armed with assault rifles, and medics. However, if the enemy manages to deploy a turret in front of the building, one of the players should get a tank and destroy that defence.

Strogg: Turrets are the key to success here. In the beginning, deploy at least one anti-personnel and one anti-vehicle. A sniper between these installations should get a few frags too (engineers trying to construct the bridge are really easy targets). The main force should be consisting of Technicians and Oppressors, both armed with lacerators. Be ready to call in an air-strike or artillery strike.

If the GDF manages to build the bridge, better immediately leave the tunnel spawn point and focus on organizing the defence - two anti-vehicle turrets, radar and artillery deeply behind the frontline. MCP cannot drive into the base, so constructors must constantly repair these two turrets. Aggressors with obliterators will have a lot of job here too. However, don't forget about repelling enemy infantry attacks - about half of the team must use tanks or go on foot and concentrate on killing incoming enemies.

If the MCP get to the deployment area, quickly move into the vicinity of the shield generator. You need to establish heavy defences, consisting of mines (put them not only on the generator, but also inside the building with the tunnel entrance), turrets and Cyclops. Snipers will probably find a few targets too. Pay attention to these Stroggs who run towards the generator - kill all spies trying to complete the task in disguise.

The fourth phase of this operation takes place in the building with contaminator. Defending it is based on deploying mines and hiding inside the structure. If the enemy gets close to the target, kill him with grenades and firearms. Moreover, don't forget about defusing explosive charges set by enemy soldiers. The defending team must be consisting of constructors and technicians. Operation is extremely long, so GDF chances to complete all objectives are very low, even if the Stroggs don't show teamplay.