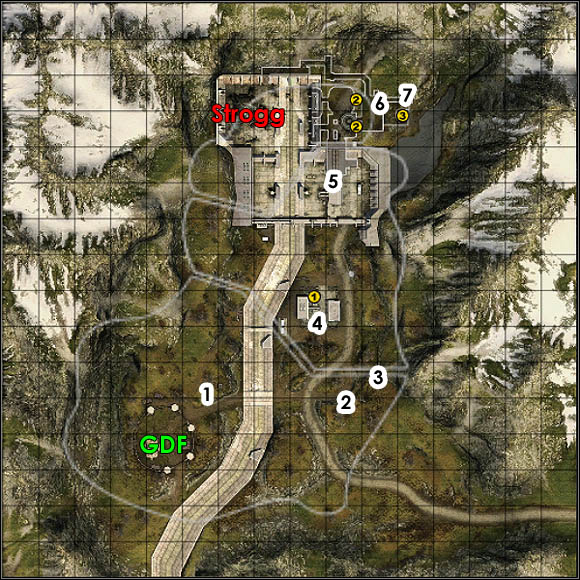 2. GDF soldiers have to destroy northern or southern entrance with explosive charges;

3. Spies must hack into the sewer controls.

GDF: The team must split up into two groups. The first one (consisting of vehicles, soldiers, engineers, field ops and medics) should go to the substation and attempt to execute primary objective 1. Nobody should even think about the first secondary objective. The second group consisting of field ops and engineers should complete secondary objectives 2 and 3. Mechanics should capture the spawn point and call in a turret drop (preferably anti-personnel) and others will call the artillery, etc. The fight for the EMP generator construction yard is quite difficult, but destroying the barricade (secondary objective 4) should make the job a bit easier, just like often artillery strikes. When the job is done, immediately push forward and capture the spillway spawn point.

The next part of the mission requires abandoning vehicles. Artillery becomes useless too. It's an infantry fight, so the team should base on accuracy of all members. There are several ways leading to the target, try to follow larger groups of players, because a big, mighty force can complete this objective faster. The best class to choose here is the soldier, but medics have here a lot of job too. When the team manages to plant explosives and organize quite good defence of these charges, a few players should switch their classes and become spies.

Once the bombs goes off, run to the sewer controls and start hacking it. If for some reasons that kind of attack is impossible, try to open additional routes (secondary objectives 6 and 7) and use them to get closer to sewer controls. I advise you to find and use disguise during this part of operation. And watch out for mines!

Strogg: Call a Dark Matter Cannon and artillery strike as fast as possible. Place an anti-personnel turret next to the EMP generator construction site. It is also important to send a few guys to defend the hill, on top of which the GDF can build a spawn point; this point gives them the ability to make their attacks more constant and to call accurate artillery strikes. The group responsible for the defence of the hilltop must use the fastest vehicles to get to the battlefield. Heavy machinery should defend the construction site. If the enemy manages to build the generator, fall back and prepare another defence line.

Now it is the time to set some traps. Mines will surely finish a lot of enemy soldiers. Aggressors with hyperblasters may settle themselves in corridors and wait for opponents. The rest of the team must just shoot accurately and don't let GDF forces wander in all corridors of the complex. Spawn hosts are useful here too.

Let's assume that the enemy blows up one of the gates, opening the way to the last objective. In that case, constructors must deploy their mines. In fact, they're worth deploying everywhere, especially near the primary and secondary targets. The general tactic doesn't change - still, the key to success is accurate shooting. And don't trust anyone, as you may meet some enemies in disguise.