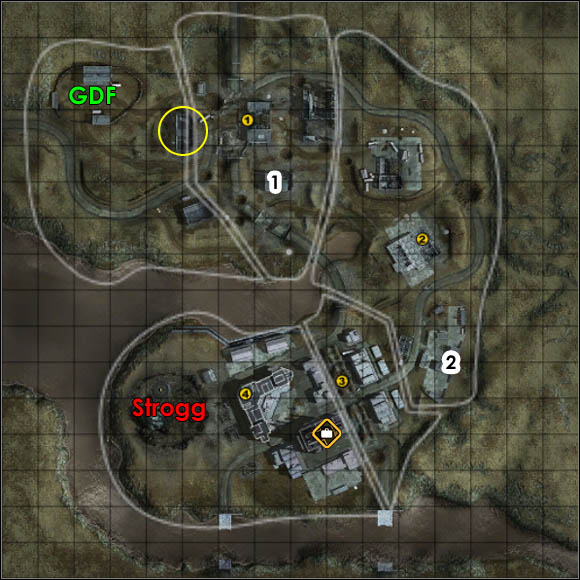 1. GDF soldiers must blow up the barricade;

2. Any GDF unit have to drive the MCP to the central outpost;

4. Any unit must recover and transmit the DataBrain.

GDF: We're starting with an attack on the barricade. In this part of operation, the team must be consisting of soldiers, medics and a few spies with sniper rifles. A field ops or two could participate too. If it is possible, soldiers (armed mainly with assault rifles, but a few rocket launchers could come in handy as well) should take the fastest vehicles, get to the barricade and plant explosive charges. This manoeuvre can be done successfully, but it must be performed rapidly. Bombs should be protected by soldiers (concrete obstacles located along the way leading to the barrier should provide nice cover) and sniper spies. They can aim at Strogg constructors trying to defuse explosives from a building marked with a yellow circle (check the map above). Field ops can use his artillery to destroy incoming enemy armoured vehicles.

Now it is the time to complete secondary objective 1. After that, escort the MCP to the central outpost. In this part of operation, spies must be replaced with engineers. The rest doesn't differ - soldiers (preferably with rocket launchers), field ops and medics are still fighting. Enemy anti-vehicle turrets deployed on MCP's way must be destroyed at all cost in order to get the vehicle to the central outpost. Most of them you'll find just right in front of the outpost. Field ops can hide behind the fence, north of the MCP's deployment area. From there, they can mark enemy turrets as targets for their artillery. Moreover, there are some heavy vehicles, ready to use against the enemy, but be careful - drive to a place, which is out of opponent's range, but close enough to aim and shoot at Strogg deployables and any other enemy units.

Now let's disable Strogg shield generator located in the southern part of the map. Spies must participate in the fight once again. Their job is to find a disguise and get close to the generator. It is a nice idea to use the passage in the building located to the east of the target. The rest of the team are - traditionally - medics, field ops and soldiers. The fights are taking place near Strogg main base, where the enemy keeps a lot of heavy machinery. He'll surely make use of it, so expect some vehicles guarding the target. GDF reaction on it may be sending not only own heavy machines, but also soldiers with rocket launchers. Artillery strikes should work here too. Moreover, lots of firepower should distract Strogg forces, so they won't be able to fight spies attacking the generator. Meanwhile, try to capture another spawn point located in this area (secondary objective 2).

The last target is recovering the DataBrain and transmitting its data via the transmitter. DataBrain is located in the place marked with a suitcase in the map above. The building, where Strogg hid it is quite complicated, just as the one with the transmitter. Thorough analyze of these structures (in a single player mode) is really helpful here. Mines and shooters sitting in corners of rooms are the biggest threat here. The infantry must keep an eye on the guy with the DataBrain, while one tank should patrol the area between the building with DataBrain and the one with the transmitter. You never know when the enemy will send vehicles against the guy with suitcase.

Strogg: Barrier defence must be establish as fast as possible. Unfortunately, deploying turrets may be troublesome here, as there's lack of acceptable surface here. The only option here is deploying on anti-personnel installation to the south-east of the barricade. Try to aim its barrels at the barricade so the turret will shoot every soldier trying to place explosives. Unfortunately, that setting of barrels makes the whole deployable an easy target for enemy soldier, who may get close to the turret and install a bomb on it or damage it with grenades/rockets. 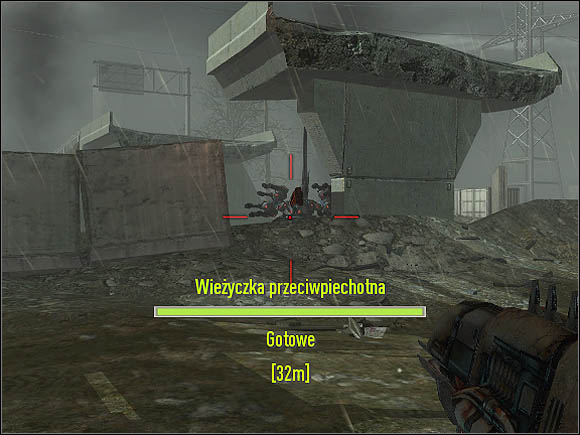 The team must be consisting of constructors, technicians and literally 2-3 infiltrators-snipers. To prepare better defence, get some vehicles on the battlefield, preferably with experienced players behind the wheels. Don't forget about planting mines on the barricade. The main Strogg bastion is located in the ruined building, to which the barricade is connected. Snipers can use it as a vantage point and constructors can jump through its windows in order to get close to GDF charges in a short time.

Next part of the operation is the fight with the MCP. Surprisingly, there's no alternative route, co we can put on it some mines, preferably 10-20 meters behind the barrier. Deploy as many anti-vehicle turrets in the vicinity of central outpost as possible. There's a lot of space, so deploying 3 or4 installations shouldn't be a trouble. However, they must be supported by infantry, preferably aggressors (with obliterators), technicians and - of course, constructors. 1-2 oppressors should use the artillery to disable enemy vehicles and turrets. If it is possible, try to liberate GDF office spawn point.

If GDF will manage to deploy the MCP in the central outpost, immediately fall back and put few mines on the shield generator and in the vicinity of hilltop spawn point (enemies will surely try to capture it). If Strogg constructors are moving fast, they should find some time to mine also the road connecting the central outpost with urbanized area in the southern part of the map. Some turrets should be useful too, anti-personnel as well as anti-vehicle ones. Moreover, get some heavy machinery on the battlefield. A few aggressors (obliterators are not necessary here) should get on the rooftops, which are great vantage points, especially for eliminating incoming spies.

Defending the DataBrain and transmitter is a regular drill. Deploy mines and hide in a corner of a room. What is more, try to get a heavy vehicle to the space between buildings with DataBrain and transmitter and kill those who try to transport the package. Remember that transmitting the data takes some time, so if one of GDF men will manage to get through the whole defence with DataBrain intact, you'll still have some time to get him. Technicians and constructors should prepare the defence. A few aggressors with hyperblasters should do something good for the team too.