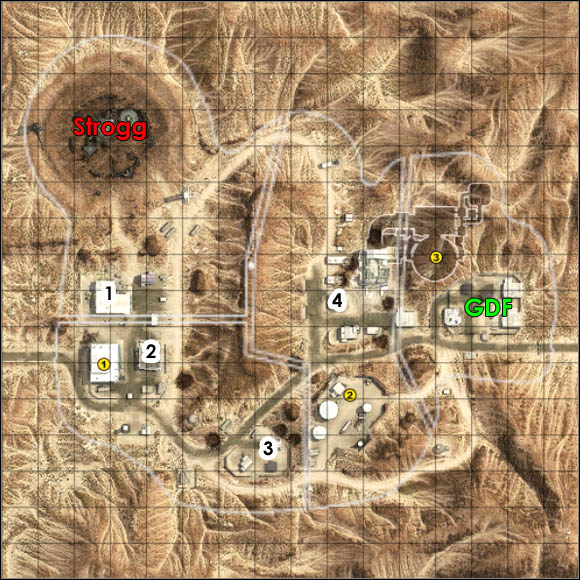 2. Constructor must build the mining laser;

3. Aggressors have to blow up the portal with their plasma charges.

GDF: The Strogg will have to get through a lot of surprises made by GDF on their way to the generator. Deploy 4-5 anti-personnel and anti-vehicle turrets, put some mines in the vicinity of the generator and, of course, the infantry (consisting of engineers, medics and soldiers with rocket launchers) should ready their rifles. 1-2 field ops soldiers should call artillery strikes on enemy vehicles if the enemy will use them in offence. Moreover, GDF cannot lose their spawn point in comms building. The Strogg can deactivate it (secondary objective 2). Mines in the room and checking the spawn point from time to time should discourage enemies, so they'll leave the comms building alone.

The next Strogg objective is building the mining laser. Be aware of the fact that the enemy will probably attack from the captured compound. The defence force (made of infantry) should be concentrated on their way. In the direct vicinity of the mining laser, GDF engineers should deploy turrets - anti-vehicle ones are as essential as anti-personnel hardware. Getting the tank on the battlefield should be quite helpful too. Naturally, don't forget about mines - the best places for them are on the sides of the mining laser, because constructors have stand beside the laser to construct it. Useful classes in this part of operation doesn't differ from these used in the beginning.

If the enemies will manage to build the mining laser and destroy bunker doors, you'll have to fall back and prepare new defence line. The most important are the mines - engineers should install them on the portal's core. It would be also a nice (and nasty) idea to call an anti-personnel turret at the bunker entrance. This should stop enemy infantry, at least for a while. Portal should be defended by engineers and medics. 2 or 3 snipers on top of the scaffolding should be quite useful too.

Strogg: The fastest units (like infantry using Icarus gravpacks) should take care of secondary objective 1. It is always better to attack the target from a closer spawn point. However, the enemy can easily get to that spawn and liberate it (if your team is having problems with that, constructors can place a few turrets to keep GDF men away). Other units, like Cyclops, should distract enemies by intercepting them. Thanks to that, friendly infantry (aggressors, technicians) will have an easier job with attacking the generator. If GDF doesn't install mines near its spawn point, the team may try to liberate it, but concentrating on this task is strongly dissuaded. The main objective is the generator. Note that it can be attacked also from the upper floors - Icarus gravpacks give the ability to land on the rooftop and assault the GDF forces inside the building from the gallery. That form of attack is possible only if the enemy don't have anti-aircraft weapons, able to take gravpacks down. 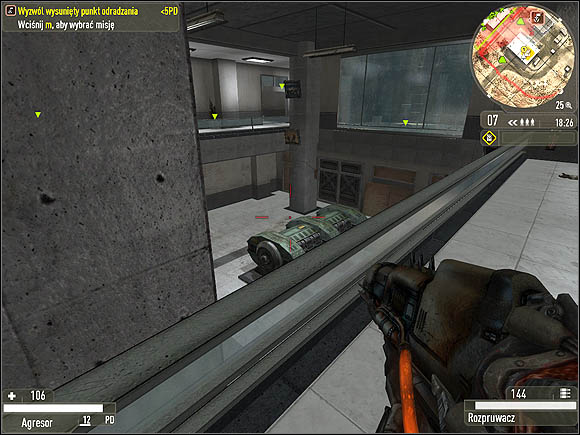 When the team will install charges, it would be a nice idea to hide somewhere near and wait for all those daredevils willing to disarm bombs planted by Strogg. The best hiding places are behind the pillars or behind a pile of boxes located to the west of the generator.

Next task in this operation is to assemble the mining laser. The construction site is located in the southern part of the map and it is necessary to capture the compound spawn point (secondary objective 3) in order to complete this mission. Heavy machinery would help here too. Desecrator, Cyclops and Tormentor will be very useful. If for some reasons (e. g. lack of organisation and discipline) using vehicles will become impossible, aggressors with obliterators will have to substitute them. You see, someone must destroy these turrets deployed by enemy. Remaining infantry (technicians and constructors) should shoot at GDF men and concentrate on the laser. The team should attack the construction yard from the west - the defence often is weaker right there. And beware of mines, of course.

The next objective after assembling the mining laser is a secondary one - team must capture spawn point in the bunker (secondary objective 4). Gravpacks, which you'll find near that spawn, won't be quite useful in the corridors of the GDF complex, where the Strogg portal is hidden. Put an anti-personnel turret near the bunker doors, so the enemy infantry won't liberate the spawn point so easily. Attack the portal from the west. Regardless of the direction, keep an eye on the whole room with the portal - there's a lot of hiding spots here, especially right beneath the ceiling.