The beginning is a little better than before. You have an ally - France. It is no so important unfortunately. Indeed, one of the goals of the campaign is to conquer some French territories in the West, and that means that you will need to break the alliance. You also need to get the regions on the south and north (that means war with all your neighbors). To be able to provide yourself a suitable revenues you have to start to exchange goods with Europe and some colonies. 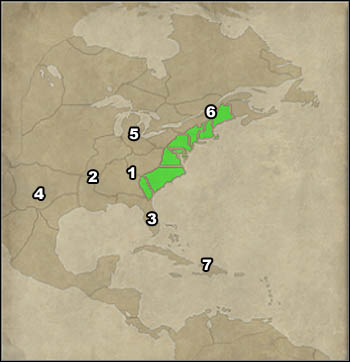 1. Tellico and Chicas should be your first targets. This nation (Cherokees) has no allies, so no one will say nothing when you make an attack. You will start with some troops of that should be enough to kill Indians.

2. There is no sense to keep peace with France. Declare war, and then conquer both Louisianas. Try to do this, however, after sending your Indiamans to Brazil and other part of the world - France can be great threat on the seas. When you will take the French territories in North America, try to sign a peace treaty.

3. Florida is needed to successfully complete the campaign. You will take it without any major problems. Conflict with Spain will not result in very dangerous land battles, they are very strong on the sea.

4. Mexico and New Mexico are your next targets. While Spanish New Mexico is not a difficult opponent, the Indian Mexico is much more tougher - enemy is numerous, but poorly trained. You have to be very quick, cause you don't have much time. After the fights try to sign peace treaty with Spain.

5. Now it will be really difficult. While attacking Iroquois or British both of these nations will start to hate you (they have alliance). In addition, Iroquois have a large army. I recommend to attack only area (which is required to victory) - in Detroit in Michigan. Attack from the upper Louisiana. You can first try to attack some territories in the south to drive enemies from Detroit. Before all of this, however, strengthen your borders. Place the additional units in Falmouth, Albany and western Pennsylvania.

6. The fight with the British may not be extremely difficult, but probably you will need some troops from other regions, such as Florida. Fort Nashwaak is not very strongly protected, so you can take it with a relatively low cost. The worse situation will be with Quebec. There is a better garrison, but your army should be strong and experienced enough to defeat it. Watch out for the British navy. Their ships can block your trade routes and you will be cut off from your money.

7. If you are still missing some provinces, send few regiments to the islands on the south. Nassau, Antigua and Port Royal are not heavily defended. You can take Martinique too. Be careful - Spain and France have a strong fleet here.

At the beginning of the game Brits will to take Maine from you in various ways, including an exchange for two provinces. One is in the north of the continent, and the other is in Europe, near Gibraltar. Personally would not recommend you accept this plan, with the Maine it will be easier for you to defeat British in the fights around Montreal and Quebec.

Spain will also want to exchange some territories with you. For the Cherokees regions they will offer you some technology inventions. This is not a good proposition too. Do not accept it.

You will start the game with one sea route. So you can sign a trade arrangement with one of the European countries such as Russia or Prussia. Unfortunately, this route can be attacked by corsairs. You can send your fleet and deal with them, but there is much simple solution - wait, Europeans will solve this problem on their own.

At the very beginning of the game build some Indiamans. Send them so Brazil and set three trade routes. It is important to start building your ships in the first turn.

In every Indian city you will find some buildings, but they are not useful. Please destroy it and build yours.

Beware of France and Spain - they have a very strong fleet!