You start with one region, the Confederation of New England, and you have to unite the entire east coast of North America. No one does not want to have any real diplomatic relations with you - France is not interested in ally, Spain and the Netherlands do not want any trade agreement. You have few units, which must be used wisely. 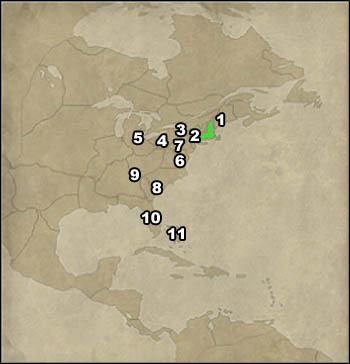 1. The first step should be to eliminate the risk from the garrison in Falmouth, to the north-east of your country. Try to develop Boston and you will be able to train line infantry there. With this type of units (make sure you're over-represented, the army is not yet sufficiently experienced to risk ratio of 1:1) attack British in the region of Maine. This is an important step not only because it eliminates the risk of the enemy attack, but conquering Falmouth will result in training center in Brunswick. Make sure that during the trip to Falmouth, Boston is protected. Keep few militia units in this area.

2. The second step should be to conquer New York. Please send an artillery to the battle, a few units of weak cavalry, and two regiment of dragoons. Do not hurry with the attack, you need time to regenerate after the Falmouth. Conquer of Albany City will give you access to the port. What's more there is a chance that Netherlands and Spain will now become your business partners.

3. If you will clear the New York with the Albany as a capital city, then go west - to the Cherokees land with the city of Cayuga. Conquering of this region may cause a conflict with local Iroquois Indians.

4. Niagara can be a strongly defended city. Collect a large and strong army (18 line infantry units with the greatest experience, 1 artillery regiment, and 1 general) to defeat Indians in this area. After the fight begin to train a strong army in Boston and Albany.

5. Finish Iroquois by conquering Detroit, Michigan. A strong army from Niagara must deal in this fight. It is good to take the city as soon as possible. With the extermination of Iroquois, Cherokees will declare war to you.

6. You can also send your troops from Niagara to Annapolis. You should not encounter strong resistance there.

7. An attack on Philadelphia is a big fight against the British garrison there, use the power of the combined armies from Annapolis and Boston-Albany. Philadelphia is very valuable, not only because of that it is a goal of the campaign, but also because it is the highly developed city.

8. If you are able to conquer Philadelphia, take next regions (Williamsburg, Charleston, Savannah).

9. Once you will reach the Savannah and Georgia, move your troops to Cherokees cities of Tellico and Chicas. It is good to defeat the very quickly (as with the Iroquois).

10. After a fight with Indians try to attack Florida. This positions are strongly defended, but you can deal with this problem - most of British troops are scattered all over the area. Contrary to yours.

11. You should have some fleet now - invade Nassau on Bahamas.

At the beginning France is your only possible ally. They probably will not want to talk with you about the alliance. You need to get some land to be respected in the world. Diplomatic talks will be later, do not think about them at the beginning. When you will conquer 4-5 lands check if they didn't change their mind.

There is a risk (or opportunity) that Indians will declare war to you. First Iroquois then Cherokees, etc.

To be able to think about the centers of production rise up the taxes. When you will conquer 2-3 new regions Spain and Netherlands will want to talk with you about the agreement.

In every Indian city you will find some buildings, but they are not useful. Please destroy it and build yours.