You begin with a country that has no ports. Although you have access to the sea, but there is a very long way to the first shipyard. Russia in the east is a very good ally and it is better not to destroy this relation at the beginning. In the West you have two opponents - Prussia and Austria. North and south: these areas are dominated by the Turks and Swedes. Both nations hates you, war with them can begin at any time.

Courland and Saxony are your patronages. You also have an ally in the west - Denmark. At the beginning of the game it is nor very important.

Poland is a relatively weak country, if compared to the western countries. As a matter of fact you must ensure that everything - development of ideology, military (including the navy) and economy - is in a very good condition. Do not worry about Berbery, 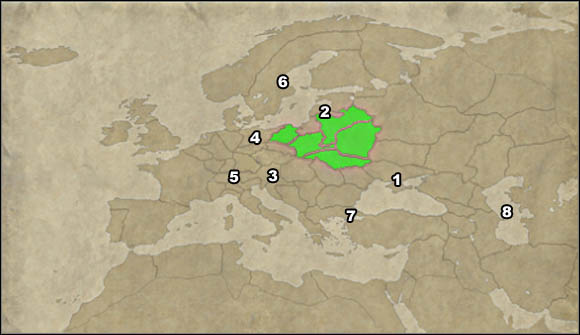 1. Take Crimean Khanate (do not call Russians for help). Keep in mind that the attack will mean that you will start a conflict with the Ottoman Empire. If you decided to invade Crimean Khanate, then be ready to make a peace very quickly. If you do not want to have a problem with the Turks, go immediately to the next paragraph.

2. Gather a very strong army in the north and declare war to Courland. The fight will be hard, but it is worth it because later you can be able to build there one more port. Swedes are to strong to fight with them now.

3. One of your goals in this campaign is to conquer Vienna. Collect some of your forces in the western part of the country. Protect your training center of Krakow, and then declare war to Austria and invade Wroclaw. From there, go to Prague and Vienna. From Vienna you can move to Croatia.

4. From Prague you can invade your patronage - Saxony. After Dresden, the way to the Prussian city of Berlin will be clear. During the fight with Austria you will surely be able to develop your country so well that the war with Prussia will be possible. Take Krolewiec too.

5. In the west atmosphere will be rather tense. Many countries will be very happy with your new territorial conquests. There is a big risk that Venice, Württemberg or Bavaria will attack you. You must defend yourself and you must realize that these countries are rather strong.

6. During the fights on the west you will be able to build some ports on the Baltic Sea. Reinforcement Courland with a large a group of soldiers, and then attack Sweden. You can fight on the land for Riga, St. Petersburg, and Abo, and at the same time you can to try send some army by ships to Stockholm. As Denmark for help.

7. The last major objective is to conquer Istanbul. Because you need to collect 40 provinces, I suggest to go to war with them on the land. Moldova, Serbia and Bosnia will be poorly protected, and soon they will fall into your hands. Collect enough troops to take Rumelia.

8. In order to get the required 40 provinces, you can continue to fight the Ottoman Empire. Then take Georgia, Persia, and Russia (only if you find that it is a militarily weak country). All provinces near the Caspian Sea should fall into your hands.

Prussia can ask you for the Western Prussia, in exchange for East Prussia. It is a good option, because in the city of Krolewiec is very rich.

After taking some lands in the south (Croatia) Ottoman Empire will want this area in exchange for technology. If you will find that the improvements proposed by the Turks will help you in development, a decision is clear. Under no circumstances do not give them Galicia and Podole!

Try to sign trade agreements with all your neighbors with whom you do not have a war. Colonial Trade makes no sense, although build some trade ports. Thanks to them, you will get additional business partners, such as Marats. Some distant countries are not interested in your territorial expansion in Europe and Asia - immediately sign agreements with them.