You have very little land, the two trading partners and many regions to develop. You have to unite the land. Due to the small number of ports, you will have a few customers on other continents. However, this does not change the fact that Prussia can make a living from taxes. Note, that you will start with relatively strong army. 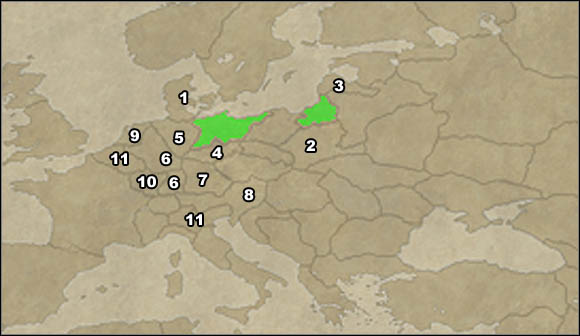 1. First, Denmark. Train some line infantry in Brandenburg and use ships to join it with troops from Krolewiec. These forces can conquer Copenhagen with easy. Immediately after the fight seek alliance with Denmark. They should accept it immediately, especially since the north of the country is engaged in war with Sweden.

2. Probably there will be a conflict between Austria and Poland. This will be a good time to cut Poland from the Baltic Sea. Reinforce your army in Copenhagen and take it by the ship to Krolewiec. Make an invasion on West Prussia from here. Now it will be a simple way to Warsaw. It would be good to conquer rest of Poland - you will get some provinces required to successfully complete the campaign.

4. Saxony next. Without protector (Poland) they are very weak. If you have developed army, then you should have no problems in the Battle of Dresden.

5. There is a chance that in the meantime, Hanover will lose his powerful ally - United Kingdom. Without any support from the British, Hanover will be defenseless.

6. For the next attack I would propose Westphalia. It is connected with the alliance with Württemberg. Conquer if you can. Württemberg has a nice protector - Austria - but if they declare war to you, the Austrians will not take their side.

7. Here you must to fight with Austria (you have to conquer Bavaria and it is in alliance with Austria).

8. Now, you can go to Austria. This is a Catholic country, so do not scale with conquers, give yourself some time to convert the population to Protestantism. The best is to take as many regions from the as you can.

9. At the same time Netherlands will join the conflict. Conquering their lands in Europe is the idea at least worth of consideration.

10. After your conquests in Europe, the vast majority of countries will hate you. Therefore, it will be difficult to get Alsace-Lorraine only by diplomatic talks. It is already one of the last regions to gain, it is worth to risk conflict with the France

11. If you still do not have enough lands - attack Venice, as well as Spanish lands - Flanders and Lombardy.

After conquering Copenhagen and an aggression on Poland, try to make peace with Russia. As a result, the threat will disappear from the East and it will be possible to concentrate troops in the west.

At the beginning you have will the possibility to sign some agreements with some countries. Use this opportunity.

Prussia is a country which is not very good to trade at the coast of Africa, Brazil, etc. Try to set some trade routes with European countries.

Do not build learning centers. Most of the German regions has its own facilities. As a result of conquests you can gain a lot of universities where you can invent some new technologies.