Tragedy. Ottoman Empire is in a very bad condition. Moreover you have many enemies - Russia, Georgia, Persia, Morocco and Venice - these are your potentials opponents. In addition you will have some religious disturbances. At the beginning try to develop your technology and infrastructure. You will need some good soldiers too. Luckily, you will be able to gain some gold from your provinces: Crimean Khanate and Barberia. 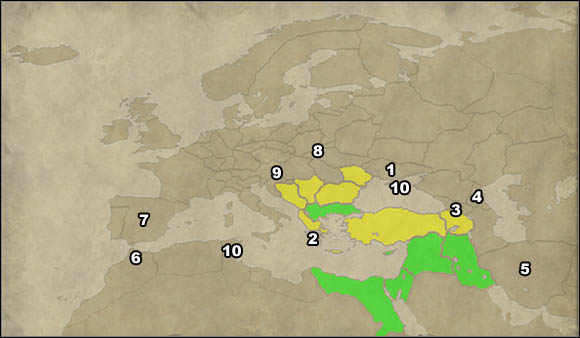 1. Beginning is very tough. Secure Crimean Khanate - send there some soldiers from Moldavia and deploy them on the... bridge near Bakczisaray. As a matter of fact Russians will not attack you for the moment. When they will come, pull back your army and return to the bridge once again. You can do this maneuver couple of times. Crimean Khanate will have some time to build some strong army. 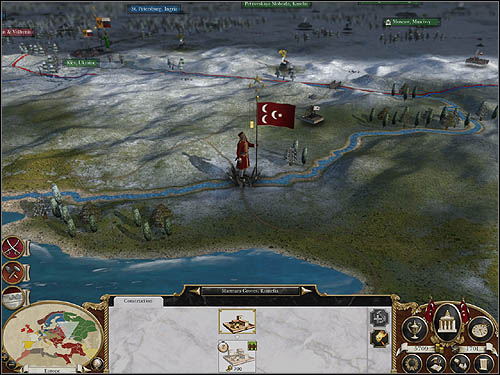 2. Act very quickly. Train some Azzars and Bashi-bazouks in Greece. You can send there few regiments of Isarelys from Istanbul. If you will have something about 12 regiments then you can try to conquer Venice Patras. You must do it quickly, before your opponent will develop his army.

3. The next opponent - Georgia. When this country will declare war to you then you can send troops from Mesopotamia to defeat them. Try to create numerous army in Armenia (very weak troops - but it is a must) with troops from Baghdad. They try to conquer Georgia.

4. Then support your army and take Chechen and Dagestan. Dagestan can declare war to you at this moment but it is not important. This opponent is similar to Georgia - you will defeat it with easy. At the same time you can build your army on Peloponnese, in Patras.

5. Take your army from Chechen and Dagestan and lead them to Persia. Start from Azerbaijan and then go to India through Persia and Afghanistan. This will be simple because conquered people will be Muslims. You will not have any religious disturbances. Try to take all regions in from Persia.

6. Send army from Patras to Morocco (on ships). It is possible that Morocco will conquer some Berberian territories. It is good because as a matter of fact you will be able to take more areas from them.

8. The next target - Republic of Poland. You must modernize your army to attack them. First of all buy some news units, develop your technology. No matter what - Galicia, Podole and Poland must be defeated. You will probably have a good infrastructure in Istanbul - train your soldier there and send them north. It is good to take some imams with you (to return the population).

9. After Poland attack Hungary and Austria. After these fights try to do something with Venice and Croatia.

10. If you need more lands then conquer your patronages and Malta. You can finish with Spain if you want too.

Try to have very good relations with Poland and Austria at the beginning. War with these two countries can be a tragedy for you. You will fight with them when you will be more developed.

At the beginning of the game ask every country about trade routes. Many of them will accept your proposition. It will cost you a lot of money but you will not regret that.

When you will start a war with Venice try to join your two fleets and reinforce them with 3 or 5 additional brigades. They might be useful to eliminate enemy corsair from Venice and Morocco.

Invent European Doctrine as fast as possible. As a matter of fact very good line infantry, light infantry and shooters with a very good shooting range will become available for you.