Everything will be great if you will have another king that can destroy everything in diplomacy. Soon you will have many conflicts will your neighbors - sometimes peace can be signed at once, but sometimes you will have to use your army. As Spain you will have areas in Europe (in the west Europe) and America (islands mostly). You will start with few trade partners, one strong ally (France) and patronage in New Spain. 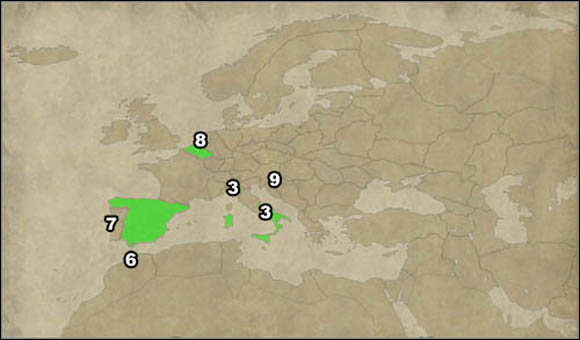 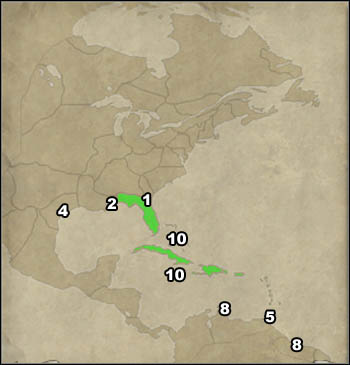 1. First of all you should carry to defend your lands. Reinforce Florida with 4 to 6 regiments of line infantry. If you want to sign a peace treaty with Cherokees you can try to invade Georgia and then ask for peace. Immediately try to invent Plug Bayonet.

2. It is very possible that Louisiana will attack you. After signing a peace treaty with Cherokees you can try to fight against France in Lower Louisiana. This conflict can end in two ways: you will take this territory or Louisiana will be incorporated to France (this is your ally so the conflict will automatically end).

3. It is possible that Naples will be attacked by the Italians from the north Apennines. Send there your army from Spain at the beginning of the game - maybe it won't result in peace but you will stop your opponent for a while. There is also a risk that Venice will try to take Lombardy from you - fights in this area shouldn't be a problem for you.

4. Try to conquer Texas - you have many Indians to kill. But the invasion from Florida should be enough to cope with them.

5. After Texas you should send some troops to pirates lands - Trinidad and Tobago. Pirates are very easy target but you must be careful during the trip - you can find many enemy ships there.

6. In Spain train some line infantry and send them to Morocco - the fight should be very short and easy (your opponent will have many, weak soldiers there).

7. Move troops from Morocco to Portugal and conquer Lisbon - Portugal will disappear from the map and the problem with their corsairs will be over. Then, order your troops to go Flanders (you have an agreements with France - remember about it!) and... read the next paragraph.

8. Time to take Netherlands. You need two of their regions: Curacao and Netherlands. First area is good to achieve in diplomatic way, but it will be very difficult because you have a hostile relationship with Holland. From the beginning. If it won't be possible then take troops from Trinidad and Tobago, reinforce them with some militia and defeat them. Netherlands will be strongly defended but if you take your army from Portugal it won't be a problem.

9. Now it is time to conquer Austria. Vienna is the last important region in this campaign. You can try to ask Württemberg for the military access - you will be able to move your troops from Netherlands directly to Austria. If it won't be possible then check if you still have a treaty with Genoa. You can try to transport your soldiers by ships and then attack Austria (plunder Venice too if you have a while). Now attack Vienna and the go to the Croatia and other Austrian territories. Provinces that are required to victory are here. If you want you can always invade Poland, Ottoman Empire and Prussia. Your army should be the most powerful at this moment.

10. If you don't have enough territories then attack Bahamas and Jamaica. Army from Curacao should be enough to conquer them.

If you will be attacked by Louisiana do not call your allies. It will destroy your treaty with France which is important when you will have to move your troops through this country.

If you will conquer Georgia then Great Britain will make you proposal to take this land from you. It is not a goo proposition. When you will have a war with Netherlands then Great Britain will ally with your enemy so you don't want to have them as your neighbors. It is good to border with Thirteen Colonies, they won't be a part in this conflict for 99%.

It is hard to set any trade routes because of the king. Build some major fisheries instead of trade ports.

Trade in trade basins makes no sense. At the beginning you have to conquer new regions and transport your troops. Later are places will be taken by other countries.