The starting situation is pretty good. You have many lands and pretty good army (note that Austrian infantry regiments are consisted of 200 men). Cities are undeveloped so you will have to spend a lot of cash on them. 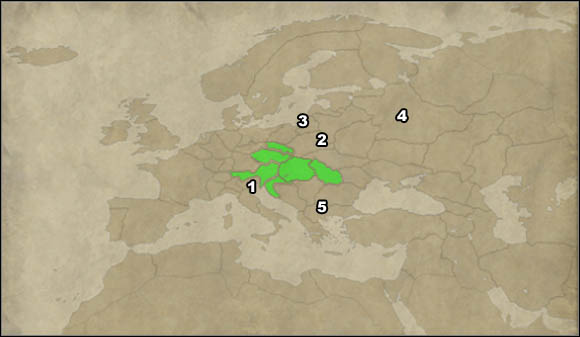 1. Conquer Venice. When you will attack quick enough then they won't be able to create a strong garrison. Then deploy there some weak units (pikemen or pandours) in harbors to prevent Venice ships from plundering your territory.

2. Then move your troop to the border near Poland. Reinforcement your regiments and then invade Warsaw. You will divide Poland into two separated lands. If Poland will attack you fist the simply defeat them (their forces shouldn't be numerous). If Prussia won't declare war to you then conquer Galicia, Podole, Gdansk, Courland and Saxony. The last two ones should be taken after you will end with Poland and Prussia.

3. If Prussia will declare war to you (there is a high possibility of that, especially when you will conquer Gdansk) sign a peace treaty with Poland. They may agree to do that after you will take Warsaw. Then start to fight with Prussia - take Berlin (it should be easy) and Krolewiec (you may find a very powerful garrison there).

4. Russia is the Polish ally, so they may join the war. If you are strong enough to divide your army then start to fight with Russians and Ottoman Empire on the south. If you can't do that then fortificate some troops on the north and try to sign a peace treaty. Take care of the Turkish army.

5. I advise you to conquer whole Balkans (including one region of Venice on the south of the peninsula). You don't have to attack Anatolia,. If you have conquered Russia earlier the (after taking Istanbul) you should have enough territories to win the game.

It is very possible that at the beginning of the game Venice will declare war to you. Prepare your army, train 3 more line infantry regiments and defeat them.

After you will conquer Venice, Spain will want to take it away from you (for Florida). It is a bad proposition because Venice is required to victory.

During the Campaign Ottoman Empire will want to give you some technological support for some provinces. It is not a bad idea. At last you will have to defeat them anyway. But at the beginning you can give them some land. Keep Croatia, because it is useful to trade in the Mediterranean Sea. Sweden will also want to exchange some regions - they will want some eastern Polish lands and Moscow. They won't offer anything interesting for you.

Ottoman Empire will want to set a trade route with you. You can try to talk with Genoa too. Try to conquer Venice very quickly - you will gain access to the Mediterranean Sea and you will be able to trade with Great Britain and Marat Confederation.