Erection of cities is possible only when you are making some new buildings. At the beginning you won't be able to build nothing more than just a administration building and dome fortifications.

You can say that these are the most essential buildings that you can make in your city. If you will click with the right mouse button on the building icon you will see how can you benefit from this structure. For example: administration buildings can result in a higher tax income, higher level of happiness and the will allow you to train weak infantry.

Every building has a few levels of development. On the next level (in most cases) he will grant you a better bonus than on the previous one. For example: State House will give you 4% bonus to tax income and the Governor's Palace - 6%

With low taxes and high wealth rate, you town will be grow very quickly (as a matter of fact you will be able to use new building slots and construct some barracks, admiralty, cannon foundry, etc.

Town with the maximum number of building slots

remember: build only these building which are most useful for you at the moment:

1. If you have a war then raise some military academies and cannon foundries.

2. In the heart of your country build some cultural buildings to raise happiness of your citizens and make your prestige level much higher. In addition, the highest level of development of each cultural building (academy, observatory) allows you to recruit gentlemen.

3. Try to have at least one admiralty and it's improvements. As a matter of fact, you will be able to develop technologies connected with navy. Moreover, admiralties will raise your prestige level.

Look at the picture above and notice that red bars located near buildings portraits. They means that the construction is damaged and need to be repaired. It can cost you much of your gold, but in most cases it is necessary (building with red bars do not fulfills their functions).

Minor cities are growing in developing regions. The speed of its development depends on taxes and region wealth.

In the region tab you can check how long you have to wait for the next city (in turns).

In these town you can build many types of buildings. We can divide them into four categories:

1. educational centers (schools, universities) - they are needed to make any technological development; they train gentlemen 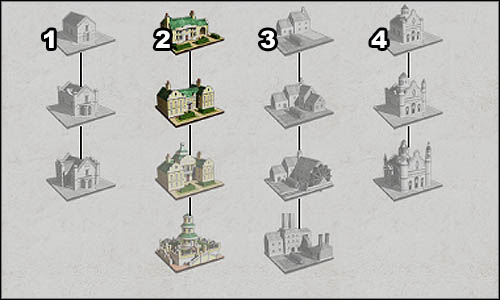 Is up to you where you want to build each type of building. Remember that every center is important, but also note that you have to keep appropriate proportions (15% of entertain canters, 80% of industrial centers and 5% of religious centers) . Medium sized country should also have 3 or 4 educational centers.

In each turn look for towns that have nothing more to build. The best is to build the highest level buildings as fast as possible.

IMPORTANT! Educational buildings are often the first target of your enemy. Opponent troops are plundering them and, as a matter of fact, other buildings are unable to function. It is very important in the case of technology centers (they need to function all the time). It is good to some soldiers near them in the high risk areas.

Remember that if some buildings are unnecessary you can always destroy them. In the next turn you will be able to build something new on their space.

If the town is near the sea you will be able to build some trading ports, major fisheries and shipyards.

Trading ports are most important because they allow you to gain some very high incomes. Try to build them always when it is possible (near oceans, Mediterranean Sea, North Sea, Mexican Gulf). As a matter of fact you will be able to create some new trade routes with other countries. In addition, all ships constructed in trading ports will have easier access to colonies.

Major Fisheries are not so popular. Mostly because of the fact that your population can make a living only with land farms. But if some region is very poor, you can try to build one. Personally, I do not often do that because the are much worse that trading ports.

Military shipyards are used to build some huge military units. You don't need to have them in large numbers (3 or 4 for Europe or America is enough). Often build them near the borders of your country (vessels will be ready to attack very fast). Do not place them in gulf or inner seas (Black Sea can be easily conquered in the other way).

In the other words - roads. They are not that important as buildings in cities and towns, but if you have too much cash do not hesitate to improve them. The higher level of roads will result in better incomes and higher speed of army movement. Remember that the highest level of roads will boost your prestige level. 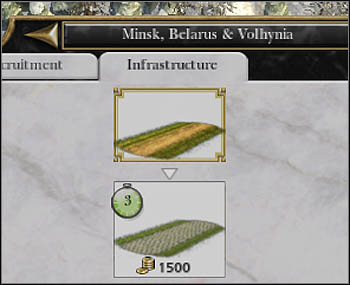