Nations are very similar to each other: you are ruling always with the same way (only names of the political systems are different). For example: in republic you have ministers and they are almost the same that advisors in absolute monarchy.

So if I started with politics then it is a must to say something more about it.

In every country we have a ruler. It may be a king/sultan/president - it depends on the political system. Apart from him there is also cabinet with the prime minister and four ministers (the names of these departments may different - depends on the country and system). 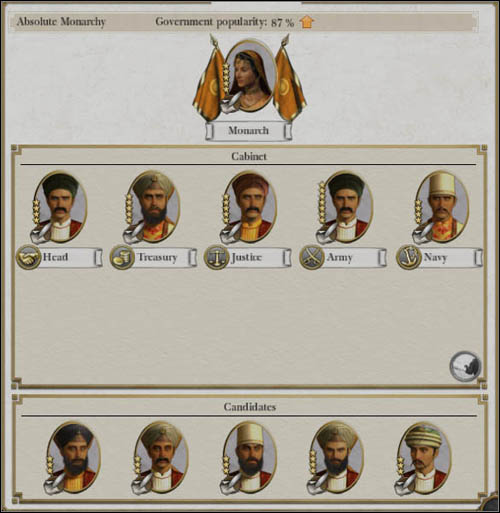 In monarchies you don't have elections.

Ministers are responsible for four departments: treasury, justice, army and navy. You can get some statistics by putting mouse cursor over the portrait. Remember that prime minister is responsible for prestige and citizen wealth, treasury minister can grant you some bonuses from taxes, etc. If you will click with right mouse button on the portrait you can get some more detail information.

Apart from minister sometimes you may find that some countries have colonies administrators. Like Netherlands which have colonies in India and South America. That's why you have two more persons in the cabinet. 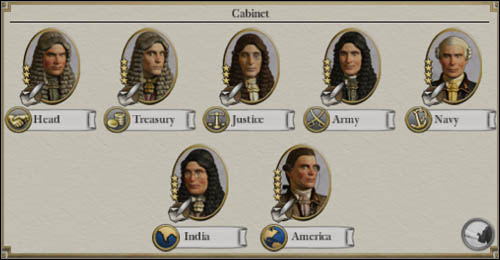 Monarch (or president) is mostly to represent his (or her) country outside. He can make some diplomatic agreements with other countries.

When you will conquer some area, the number of people with your religion will be very small. It will raise with time. To speed up this process you can build some churches and send there some priests. As a matter of fact, your new citizens will be converted very quickly.

The better your priests are, the more effective will be process of conversion. 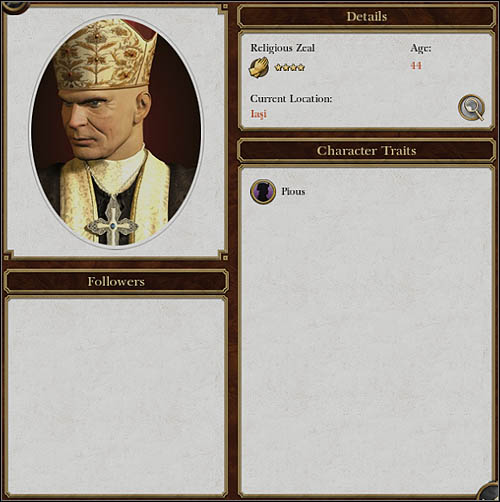