On the following page of the guide to Empire of Sin, you will find the characteristics of Stephanie St. Clair, one of the bosses available in the game.

Stephanie St. Clair is in charge of the Card Sharks. Their territories are marked in yellow on the map. A woman of French descent. By the time she got to Chicago, she'd made a name for herself in New York. She's balancing between diplomatic and more aggressive methods of action. 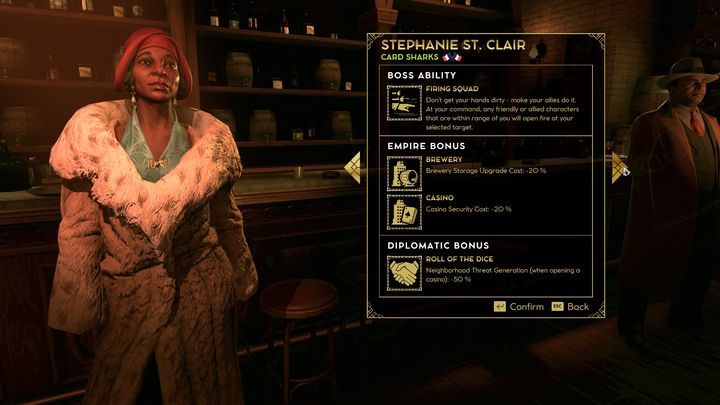 How to play as Stephanie St. Clair?

Stephanie St. Clair is a boss who gives you a lot of freedom. It is a good choice if you want to play both diplomatically and aggressively. Casinos play an important role in playing her. They can minimize threats in neighborhoods. In addition, improving their protection is cheaper. This allows improvements to be made more quickly and the security of these buildings to be improved.

If you want to use Stephanie St. Clair, when you fight, you should place her within close range. Thus, other combatants will stay within her reach.