On this page of the guide to Empire of Sin, you will find the characteristics of Frank Ragen, which is one of the bosses available in the game.

Frank Ragen is the boss of the Ragen's Colts gang, which is marked purple on the map. He's a man of Irish ancestry. He is distinguished by his predisposition to running speakeasies and hand-to-hand combat. 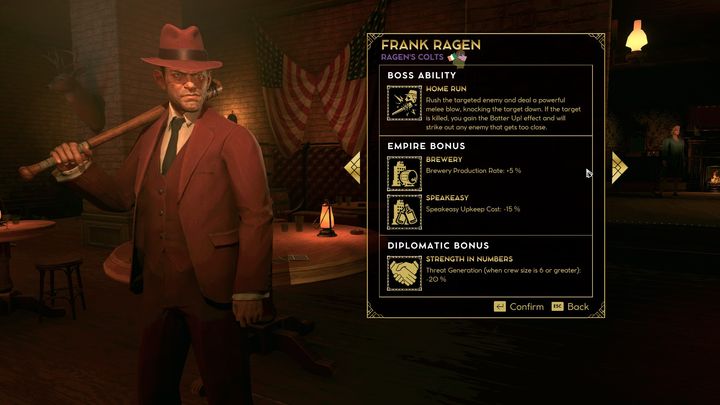 How to play as Frank Ragen?

Frank Ragen is the boss you should pick if you want bars to be the backbone of your business. Thanks to the bonuses possessed by the character, you can increase the production of alcohol in breweries and save on the maintenance of pubs.

If you want to play as Frank, then you need to be prepared for hand-to-hand combat and shootouts at short or medium distances. Equip him with a shotgun and also grab a melee weapon to deal bigger blows. Ragen also performs better in large groups. With the right number of companions, you can eliminate the possibility of your actions attracting attention.