On this page of the guide to Empire of Sin, you will find the characteristics of Frankie Donovan, one of the bosses available in the game.

Frankie Donovan is the boss of The Donovans gang, which is marked green on the map. He's a sturdy man of Irish descent. He is distinguished by his predisposition to running speakeasies and hand-to-hand combat. 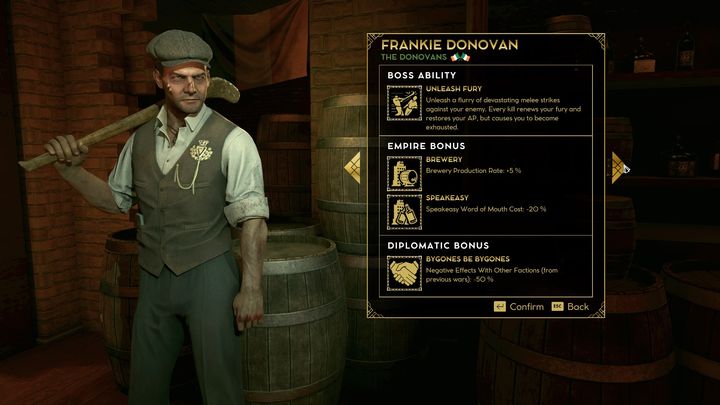 How to play as Frankie Donovan?

Frankie Donovan is the boss to pick if you want to grow a bar-based empire. With the bonuses possessed by this character, you can increase the production of alcohol in breweries and increase the turnover in your bars.

If you decide to play as Frankie, then you need to be prepared for hand-to-hand and short distance combat. Equip him with a shotgun and also grab a melee weapon to deal bigger blows. That way, you'll be able to use his special ability. Additionally, thanks to fewer negative effects with gangs, you can afford a more aggressive game.