On this page of the guide to Empire of sin you will find the characteristics of Maggie Dyer, which is one of the bosses available in the game.

Maggie Dyer is the boss of the White City Circus Gang, which is marked in pink on the map. She's a stately, tattooed, dressed woman who's spent a good part of her life in the circus. She is characterized by high accuracy and skill in melee combat. 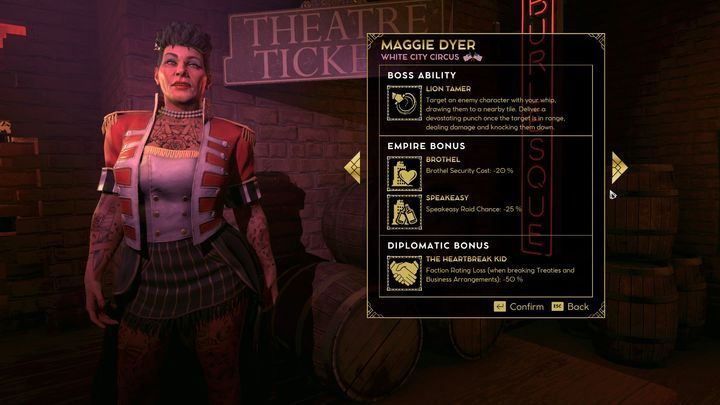 How to play as Maggie Dyer?

Maggie Dyer is a powerful boss, but not the strongest in the entire lineup. The bat that forms the basis of her special attack, although deadly for weaker opponents, does not work at long range. Since the character is pretty susceptible to damage, she is best suited for medium and long-distance combat (however, she can still inflict heavy melee damage).

Equip Maggie with a sniper rifle and a pistol, and she will prove to you what a great soldier she is. Due to her high accuracy, she will be eliminating the more distant opponents with ease. Those who stand in her way will get taken out thanks to her short weapons proficiency and a special attack.

This boss might also be a good pick if you're planning to break business agreements with others on a regular basis.