On this page of the guide to Empire of Sin you will find info about recruits. Here you will learn how the recruitment works and what the exemplary teams look like.

At the start you'll get two recruits. For starters, this will be a sufficient number, but at the moment when you begin to expand your empire and go beyond the perimeter of the neighbourhood or begin to attack more secure buildings (eg. bosses' hideouts) then you must decide to recruit more characters.

In the upper left corner you will find a button that lets you open the recruits panel. Which of them can be hired at a given time depends on the level of your fame - the higher it is, the greater the pool of available characters. 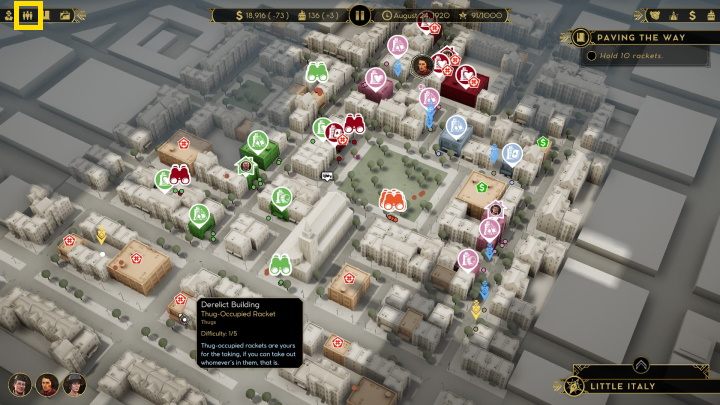 When you select one of them, a short summary [1] of the character will appear, from which you will learn what the recruit's specialization is and what kind of money you'll have to be paying him - in the form of a recurring payout and possibly a down payment. In addition, they will highlight relationships with other people [2] - if there is a person in your ranks whom a potential member does not like, then it may happen that they'll refuse joining your team. 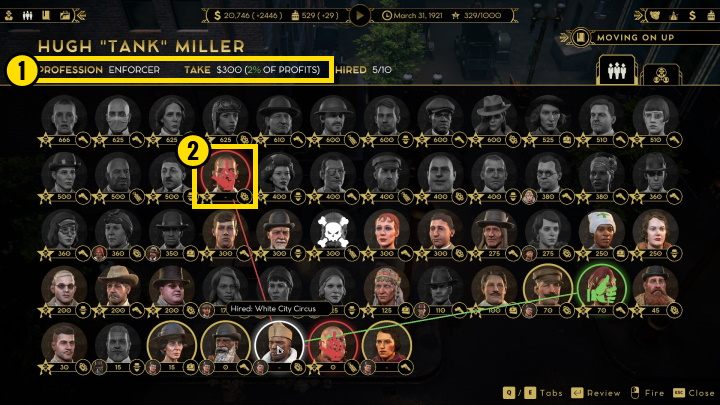 However, if this information is not enough, you can enter their character sheet ("Enter" by default on keyboards). There you will find details such as traits, equipment and types of weapons you can use.

In the course of the game, it may happen that some of the recruits will die in battle - their portrait will start showing a skull. It is clear that if this happens, recruitment will be impossible.

You can access the team panel using the icon in the left corner. There you can look at the boss and the hired characters. Each hero is defined by a series of statistics that define their usefulness and tell you what equipment to choose to maximize their potential. The whole is divided into 4 tabs.

In this tab you will find general information about the gang members. A total of 6 segments can be distinguished here (the first 4 are always visible when switching through the tabs on the character sheet). 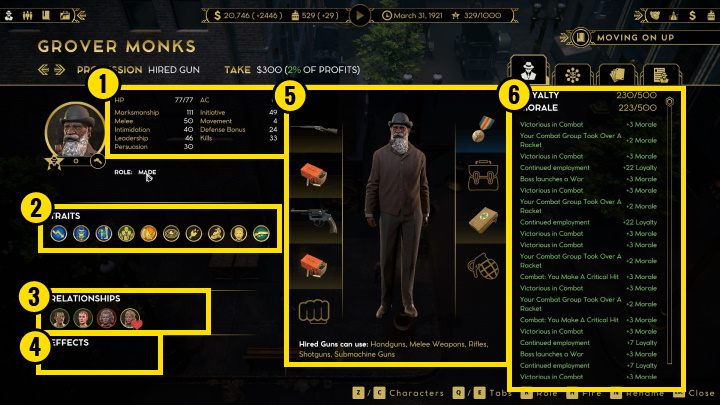 The first is the stats [1]. Here you will find the exact parameters of the mobster. They determine the effectiveness of the character in and outside of battle. These are:

Traits [2] are permanent modifiers of character statistics. They can have positive and negative consequences. They are described in detail in a separate tab.

Relationships [3] describes the relationships a character has with other recruits. They affect team morale and recruitment opportunities.

Effects [4] - character stats modifiers caused by certain events that occur during the game. They can be caused, for example, by the gangster's personal problems.

Equipment [5] - here you can choose the equipment used by the character. Clicking on the box containing a type of equipment will expand the list of things owned by your gang.

Morale and loyalty [6] determines how a gang member feels about you. Certain activities affect these indicators positively or negatively. If they fall too low then the companion might leave you.

In this tab you will find the details of your character's traits. The number of traits is not constant and is different for each character. They affect the statistics of the character, which translates into their effectiveness in a particular situation. 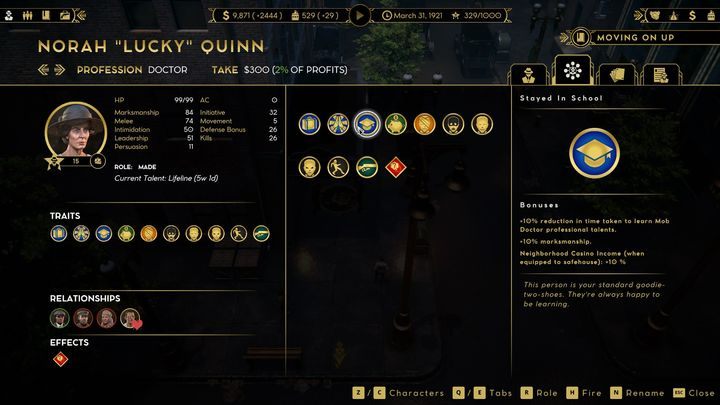 In total there are several types of features in the game, due to the different personalities and backstories of the gang members. They are marked with the following colors:

Additionally, if a character has an effect applied to them, it will also appear in this tab.

Here you can upgrade your character. The game implements 5 different upgrade trees, assigned specifically to professions (e.g. the doctor can learn healing skills).

EoS does not offer a standard character development mechanic that's based on gaining experience points. Each recruit can learn one ability per each level [1]. It does not happen immediately, though. Learning each skill takes a certain number of days to master [2]. During that time you won't yet be able to use it. 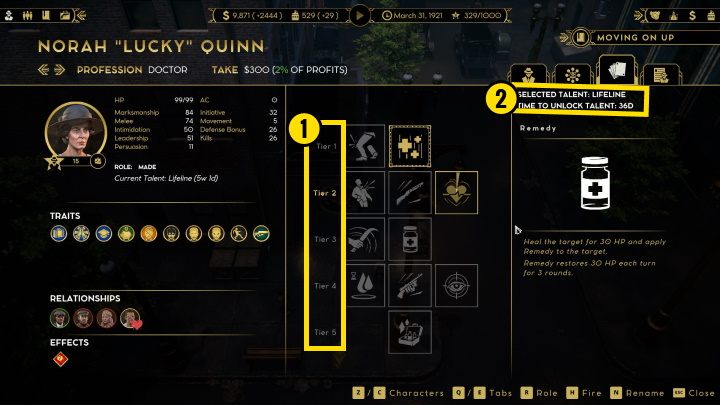 Here you will find a brief history of each of the recruits. Thanks to it, you will learn about their history and views. Although this may seem insignificant at first, it can prove to be useful. 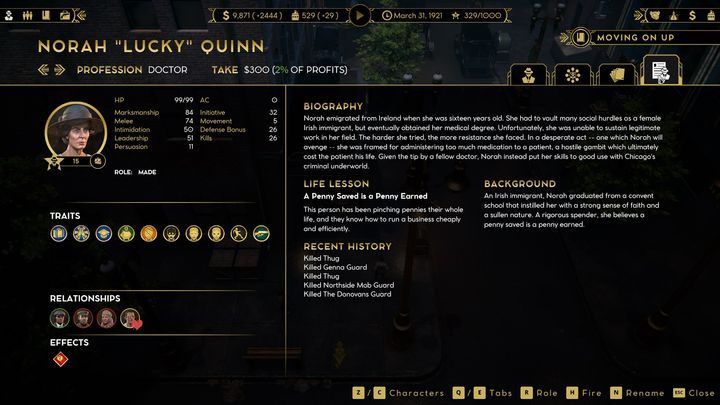 Every action you take affects the morale of each of the recruits. Whether the effect is positive or negative depends on his views and motivation. If the character is unhappy with what you're doing, he'll just walk away. Therefore, it is important to select members in such a way that their motivations are similar. Then no conflict will arise and you will avoid losses. In the early stages of the game, examples of such juxtapositions include Maria Rodriguez and Hugh Miller, or Norah Quinn and Grover Monks.

When selecting your team, you must make sure not to accidentally take people from the same class. This will limit the range of skills you have available. Of course, at the start you will not be able to have a completely diverse team. Some members won't agree to join until you've earned the right level of fame.

Below you will find two examples of team variants. The order of members is shown in the order you'll encounter them: