On this page of the guide to Empire of Sin you will find a set of starting tips, which will help you hit the ground running in the game.

Don't hire too many recruits at once

Every recruit that you add to your team takes a certain amount of money from you. In the initial phase of the game, you have a limited number of properties, so your profits are not too big. 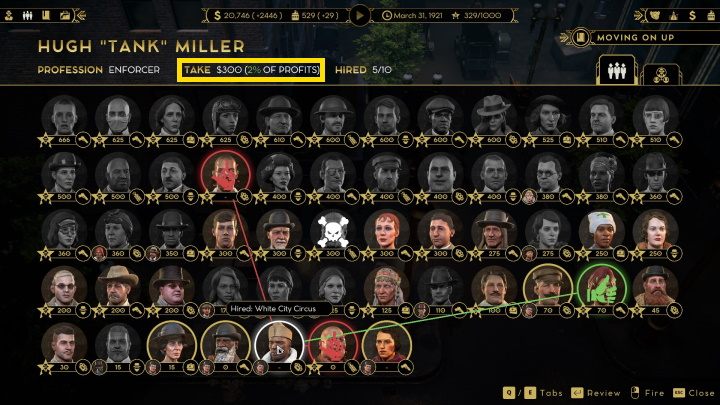 If you decide to hire too many people at once, you will lose too much funding. Therefore, increase your team gradually

In each district there are a number of locations that are suitable for running a business. Some of them belong to other bosses, and the rest do not have an owner (they can be bought or taken by force). To avoid disputes with other gangs, take over these abandoned structures in the first place.

Limit your activities to one district

At the beginning of the adventure, get acquainted with all the mechanics offered by the game. That's how you'll get used to the way the world works. Until you do, limit your activities to one district. This will make it easier for you to control a growing empire.

The buildings you own are vulnerable to attacks from your competitors. Therefore, you need to regularly improve security in your facilities. This way, they will be able to defend themselves. If you neglect this, the fight for the property may be doomed to failure.

To make an improvement, go to the buildings tab in your neighborhood and select the property.

Do not accept every offer to join a war

Every once in a while you will get an offer to join a gang war. If it is not aimed directly at you, you can refuse to take part in it. Before you decide to join the fight, consider all the potential gains and losses that will result from this decision.

During your adventure you can not only argue with rival bosses, but also join forces with them. Fighting on multiple fronts can quickly become burdensome, and you will not be able to keep up with improving the protection in your facilities. Diplomacy will help you forge alliances that can be helpful in a gang war. You will then receive additional military support.

The police are an important faction in the game - when your relations with the PD deteriorate, they will become interested in your actions. Fighting in front of buildings may get you noticed by some local officers. If any members of an enemy gang start attacking them, let them. That way, you'll avoid a bad reputation with the police. Also, during your free exploration, if you come across a patrolling officer, avoid him instead of starting a fight.