Subversive Elements is one of the bigger side quests that can be unlocked in The Hort. Completing it can greatly improve your relations with the Clerics and increase your chance for joining that faction. You must find a person that sells Elex – in order to find the culprit, you must investigate numerous clues.

How to unlock this quest: Speak with Reinhold in the Cathedral in The Hort.

Judicator Reinhold is the leader of the Clerics and he can give you a quest during which you must identify a person that sells Elex illegally. Reinhold gives you the first few clues that are connected with three people that are suspected of breaking the law.

However, that is not all. Dietrich, in the administration building, can give you more information about this case. He suggests you to check out a Clerics camp and search for Elex supplier. You also receive Dietrich’s Search Warrant. 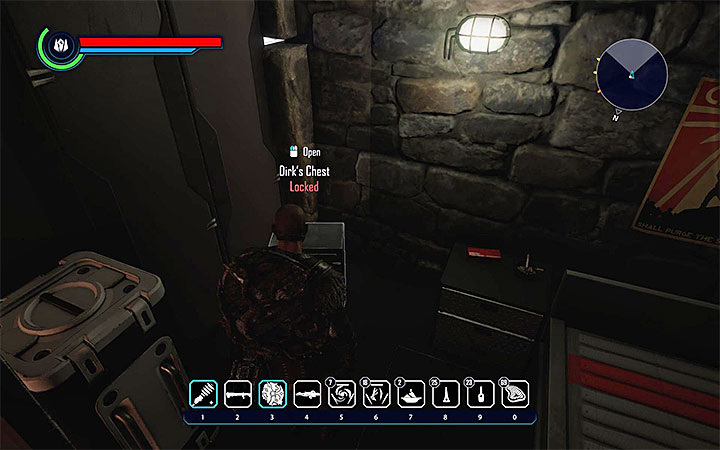 You must visit Castle Ruins of West Ignadon located far south-west from The Hort. Watch out for strong enemies (e.g. Skex) that you can come across while you are on your way there. You should select an entrance to the castle that is not guarded by strong monsters. There, you must ask questions to three members of the Clerics.

Gerd guards one of the entrances to the castle. You can use 5 Combat points and receive 25XP as well as 6 Plasma Cell. Show him the search warrant and listen to what he has to say.

Dirk is located on a floor of the main building in the ruins. Show him the search warrant and he will give you a code (4979) to his safe. Search for it in the side room (the picture) and check out its content. You won't anything suspicious. 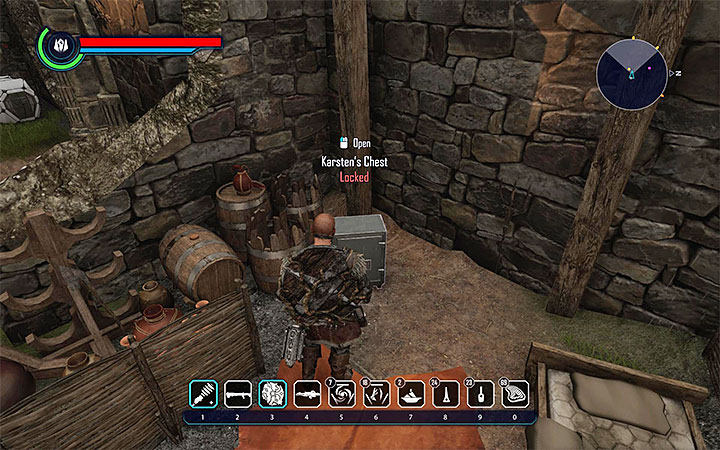 Karsten walks around the castle. Show him the search warrant and receive Karsten’s Security Code with a code (8195) to his safe. Find it in the camp (the picture) and take Bundle of Outlaw Clothing (100XP). Take the clothes to Karsten and present your charges to him. You can act in two ways:

Regardless of your choice, you must go back to Dietrich in The Hort. Tell him about Karsten's death and that you have stopped Elex trade or you can lie to him and tell that you got rid of a nameless supplier and show him the Outlaw's clothes from the safe as your evidence. You get 500XP and 50 Elexit. 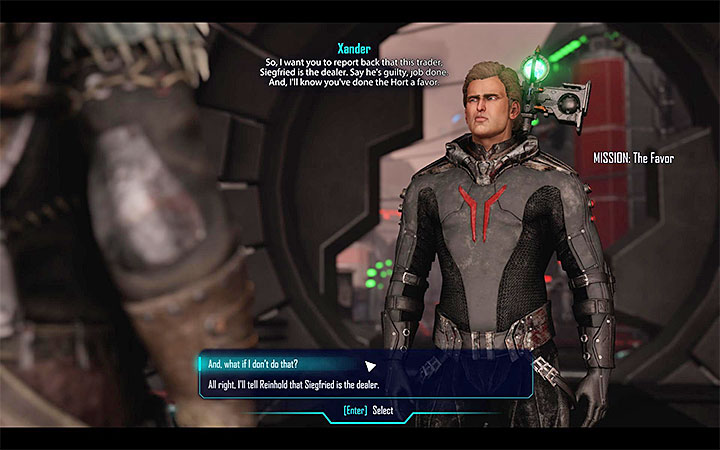 During this quest you must meet with three guards in The Hort: 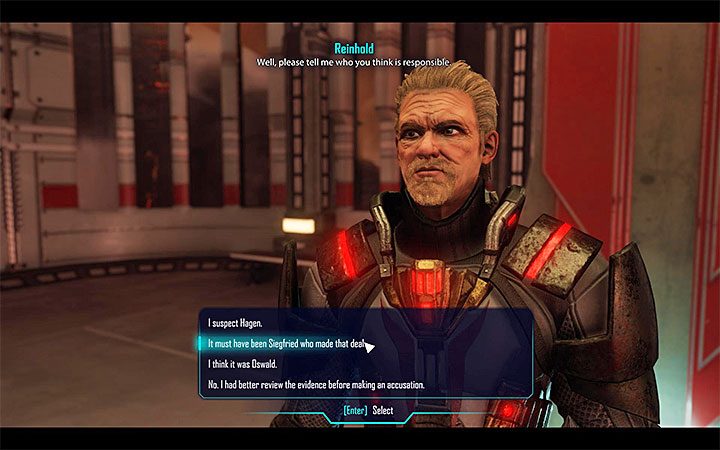 The moment of choosing the Elex trader

You can complete this quest immediately by choosing the culprit "blindly". However, it is recommended to go back to Reinhold in the Cathedral after you have completed all steps that are described above. You must choose the Elex trader from three suspects: Hagen, Siegfried and Oswald. Choose Siegfried (who’s innocent) if you want to appeal to Xander, or Oswald if you wish to accuse the true peddler. Reinhold will believe you either way, and you’ll receive 500XP. After your “candidate” is checked, you will be able to talk to Reinhold once again (of your own accord) later in the game. If you’ve pointed at the wrong person, Reinhold will be angry, if you’ve pointed at Oswald, the person responsible, you’ll be given additional 400 Elexit.

Warning – If you owed Xander a favor and you didn't choose Siegfried then the guard will have his revenge on you. You learn that traders from The Hort have stopped offering his goods to the hero. This problem can be solved in two ways – you can pay Xander 400 Elexit or you can use a dialog option that requires you to have 6 Charisma points. Regardless of your choice, you get 400XP and traders can offer their goods to Jax again.

Notes – you can get an additional award for finishing the quest and picking the right guess about the trader – 3000XP and 500 Elexit. You will get it automatically if you join the faction of the Clerks. If you’ve chosen one of the two factions, then you should visit Reinhold anyway – he will give you an award.