In this chapter, you can find descriptions of the smaller side quests in Elex that you can unlock during your stay in Domed City. Many of these quests have endings that are mutually exclusive because they allow you to gain favor or lose respect of members of one of the main factions (Berserkers, Clerics, Outlaws, Alb Separatists). Before you start doing them you should plan to which faction you want to join and then stick to your choice.

How to unlock this quest: Speak with Riley in Domed City. 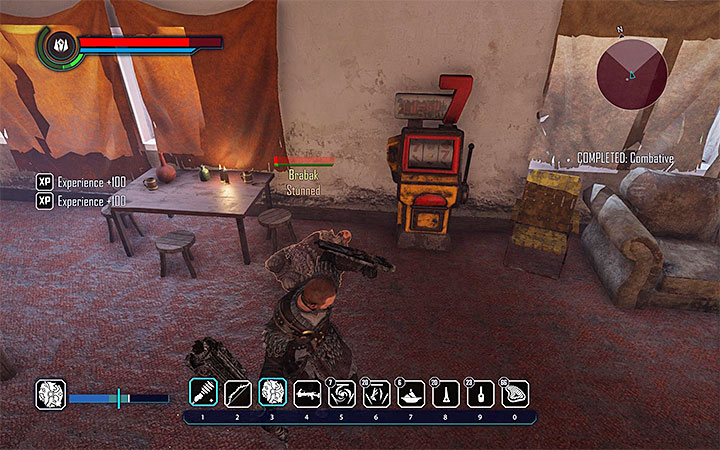 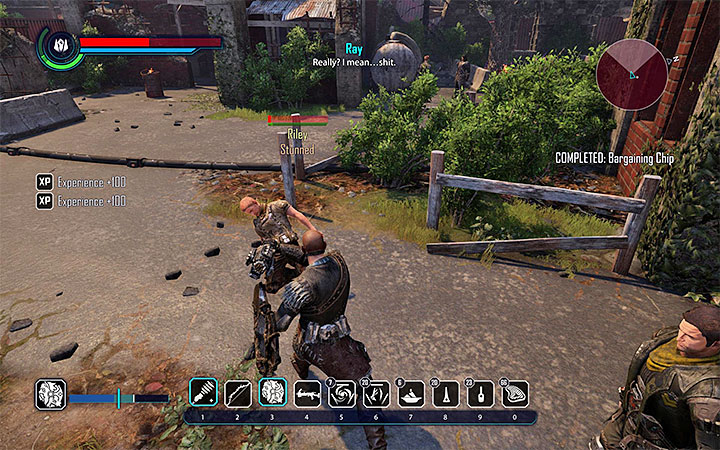 Riley is a member of Outlaws faction and he can ask you to solve a problem with Brabak from the Berserkers. Brabak should be inside of the bar. You can act in two different ways.

How to unlock this quest: Speak with Darrell in Domed City. 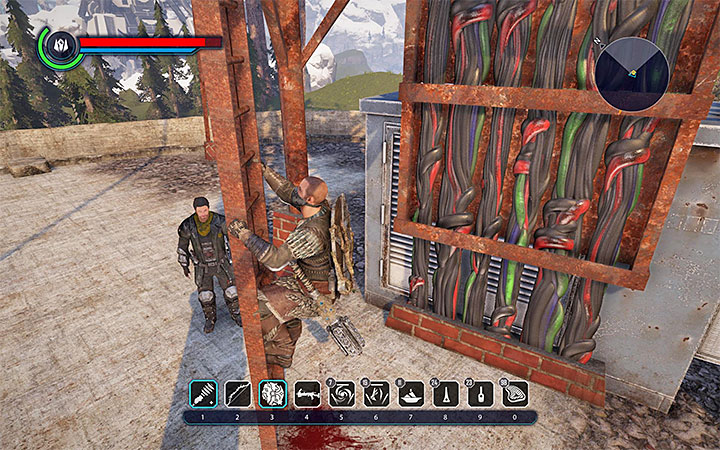 The place where you have to start climbing

Darrell from the Outlaws can ask for your help in investigating Clerics' problems in establishing a communication with The Hort. Go to Lutz from the Clerics, he works near a force field on one of the walls. You can tell him that you know about the problem from one of the Outlaws or hide this information. In both cases, you learn that you need to fix a relay station. Go back to Darrell and tell him about everything that you learned from Lutz. He gives you Bugging device and asks the hero to install it on the antenna (you don't have to make a choice yet).

Relay station is located north-east from Domed City and south from the Converter in North Abessa. You can find a few Albs there but you don't have to fight with them. Focus solely on reaching the antenna tower and start a long climb by using ladders. 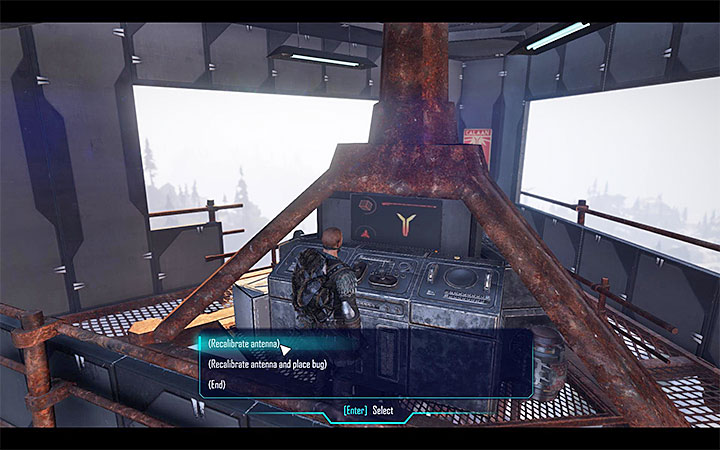 Choose how do you want to complete this quest

Reach the highest balconies and interact with the console. You can now choose how you want to complete this quest:

How to unlock this quest: Speak with Fenk in Domed City. 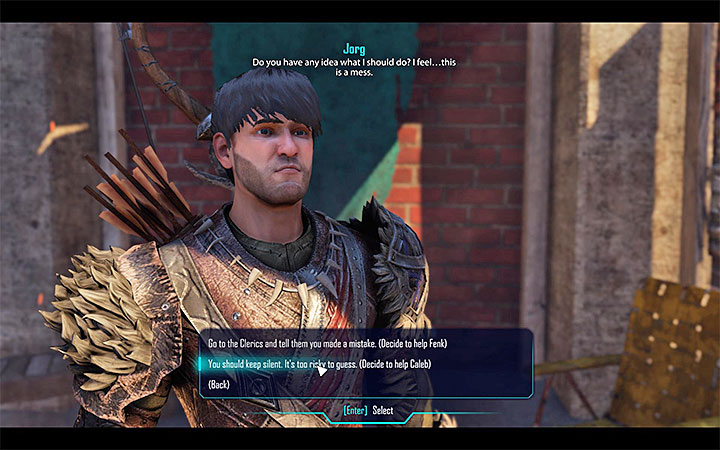 Fenk is an Alb Separatist who knows Jax. He can give you a quest during which you can stop a conflict between him and Caleb, a Berserker, who wants to banish the Separatists from Domed City.

How to unlock this quest: Speak with Paige in Domed City. 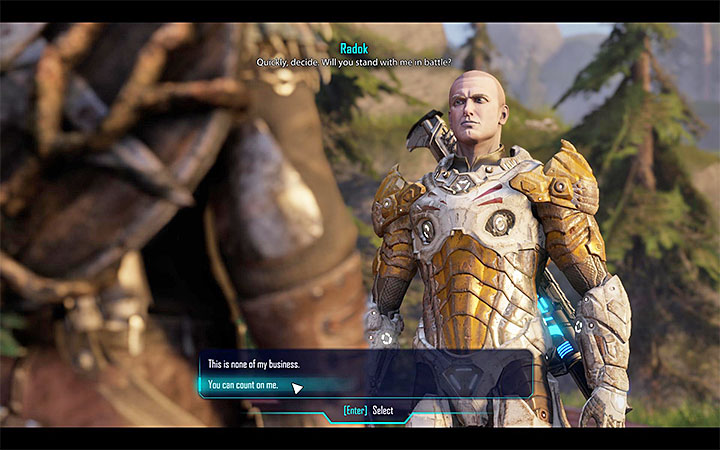 Help Radok in getting rid of the Clerics or attack him

Paige can give you a quest that will strengthen the Outlaws. She wants you to help her in transporting a weapons delivery for that faction to Domed City. You can go immediately to the appointed place or betray Paige's trust and go to Alois from the Clerics first (he can be found in the main building). You can tell him about the weapons delivery. Alois asks you to take this delivery to him.

Regardless of your choice, you must go to a small camp north-east from the city where you can find a Separatist called Radok. The conversation will be interrupted by Clerics. You can help Radok in killing them (Alois won't learn about that if you plan on working with him) or betray Radok and attack him. When the fight is over (500XP) collect 200XP, 75 Elexit and Crate of Explosives from Radok or, if he is dead, take Radok’s Report from the chest. You can now:

How to unlock this quest: Speak with Erich in Domed City. 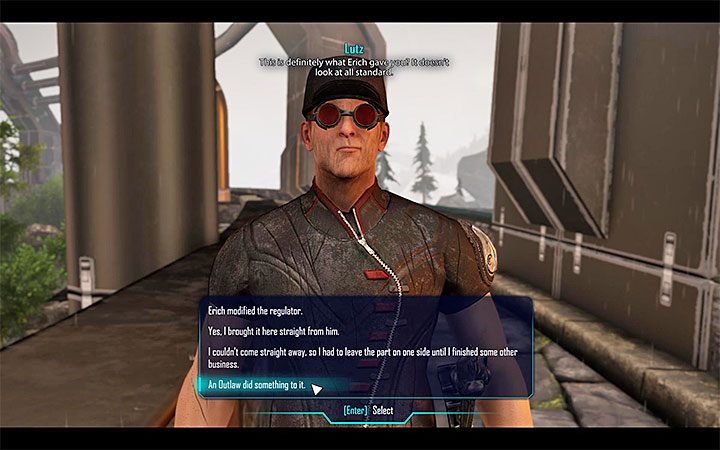 Engineer Erich can stop the hero during your attempt at entering the upper part of Domed City (optionally, you can use 4 ability points from Crafting 4 to show your knowledge about technology and receive additional 25XP). He can give you a device called Energy Regulator and a quest during which you must bring this part to Lutz. This device can ensure that the energy shield, that protects the city, will work as it should.

Lutz works on a wall and, while you are on your way, you can be stopped by Riley. He offers an alternate solution in which he reprograms the Energy Regulator. After that it can be partially turned off. You can agree immediately, do it after negotiations (the maximum payment is 300 Elexit if you have 4 points in Charisma) or refuse. Go to Lutz and give him the Energy Regulator (200XP). If the device was modified by Riley then Lutz can become suspicious. You can tell him the truth or lie and install the modified regulator. You receive 400XP. Return to Erich and collect your reward – 200XP and 150 Elexit.

IMPORTANT NOTE – SPOILER – If you allow Riley to reprogram the regulator, it may lead to a massive dome malfunction in the near future, which will leave the city defenseless. As a result, the Albs may appear and take control of the city after they slaughter its residents.

How to unlock this quest: Speak with Vivian in Domed City. 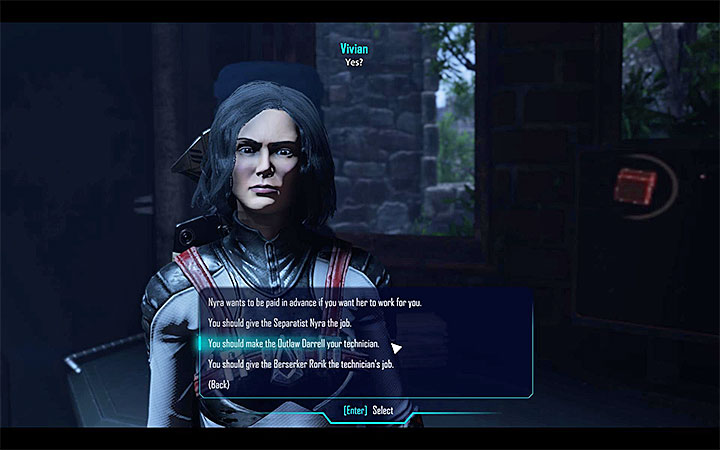 Vivian looks for a technician and you can help her and find a perfect candidate among the three that she is currently interested in. Before you go and talk about the job you should agree to listen to Vivian's entire story and you will receive additional 200XP. The potential candidates are:

How to unlock: Speak with Gottfried in Domed City. 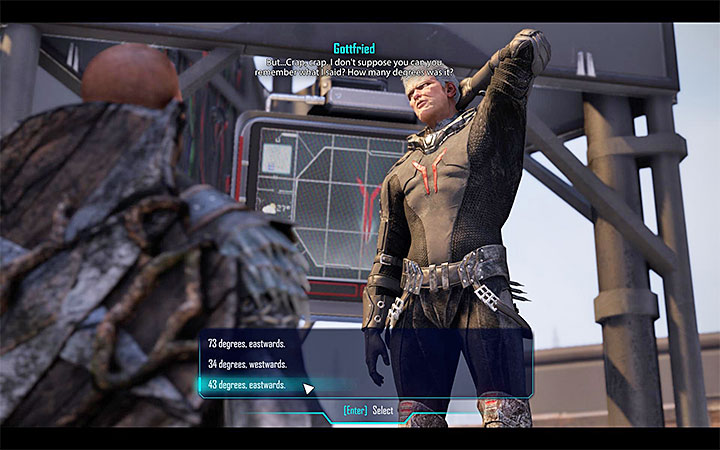 This is a very simple quest that activates when you speak with Gottfried on top of the rooftop of the main building in Domed City. The arrival of the hero distracts Gottfried. You can help him to remember what he was talking about. The correct answer is the third one – "43 degree, eastwards" (the picture above). You receive 100XP and 25 Elexit.