This chapter contains walkthroughs of side quests in Elex that can be unlocked in The Fort. Many of these will allow you to gain respect among the Outlaws leaders.

Enter the Fort of Tavar

How to unlock the quest: Talk to Spike or Cutter near the entrance to The Fort. 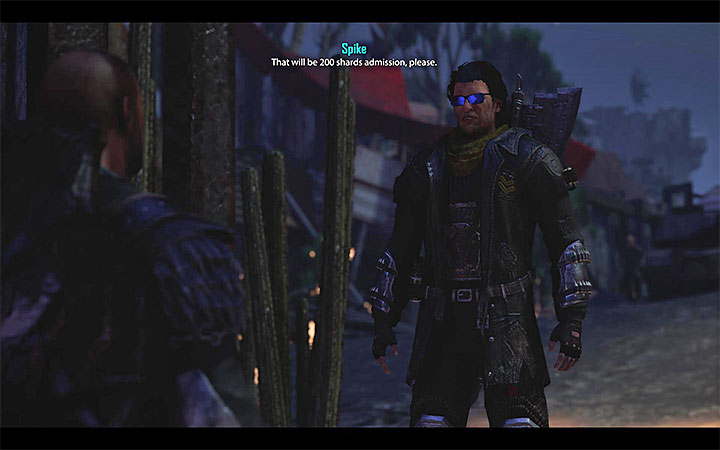 Spike, contrary to Cutter, demands a payment for entering the fort

This quest is added to the journal after visiting The Fort for the first time (headquarters of the Outlaws) (200XP).

Note - You can get to The Fort in some other ways - through caves or using the jetpack. This will let you avoid both conversations.

Warning - Try to do this quest when you approach The Fort for the first time. Otherwise, the quest giver can die.

How to unlock this quest: Speak with Bullet near the entrance to The Fort. 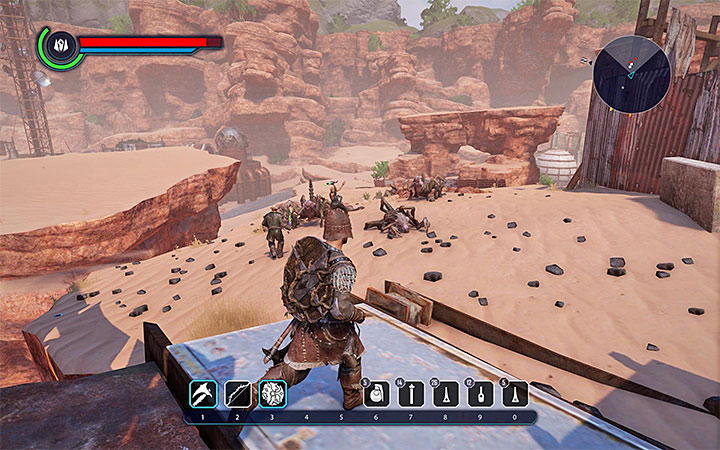 Ignore Spike when you reach the north entrance to The Fort and go left. Lucy and Bullet are fighting with mutated bugs in the place presented in the picture. Join the fight. Be careful if your hero's level is low. Try to only distract the monsters so the allies can finish them off. Parry or block monsters' attacks.

Speak with Bullet, provided that he survived. You receive a quest during which you must ask for more reinforcements that can defend The Fort. When you get inside, you must speak with William. You can:

Completing this quest gives you 200XP.

How to unlock: Talk to Cutter near the entrance to The Fort. 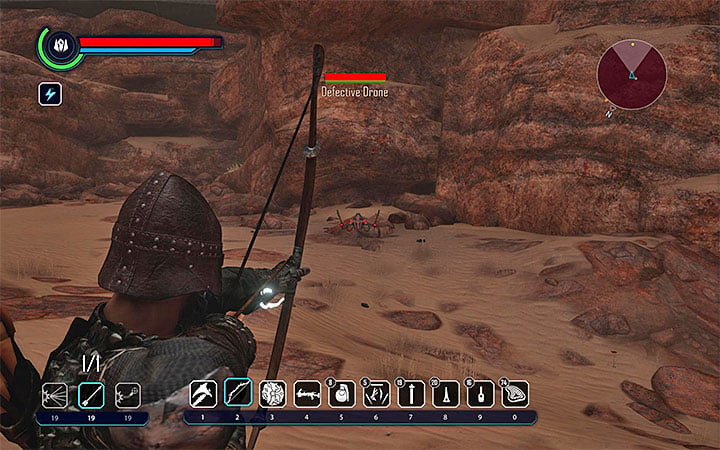 Destroy the drone and collect the AI module

During your conversation with Cutter, you can offer to help him with finding a robot to relieve him of his guard duty at the entrance to The Fort. You can use a special dialogue option if you have at least 10 points in Craftng, or prepare for a long search.

Your first job is to acquire the AI module. You'll get a location of a drone, southeast of the city. Once you're there, attack the Defective Drone (buff yourself against energy attacks if you can before you engage it). After the tin can is done for (25XP), search its remains to collect the Defective AI Module (200XP). Take the drone part back to The Fort and meet with Cutter (200XP). You can use 10 points in Crafting to fix the module by yourself, or request help from Elmar, who is working on the bomb near Duke's Bunker (don't forget to remind Cutter about a payment of 80 Elexit). Elmar will request payment for fixing the module. You can pay him with 100 Elexit, convince him to change his mind if you have 3 points in Crafting, or intimidate him. Return with the Modified AI Module to Cutter (100XP). 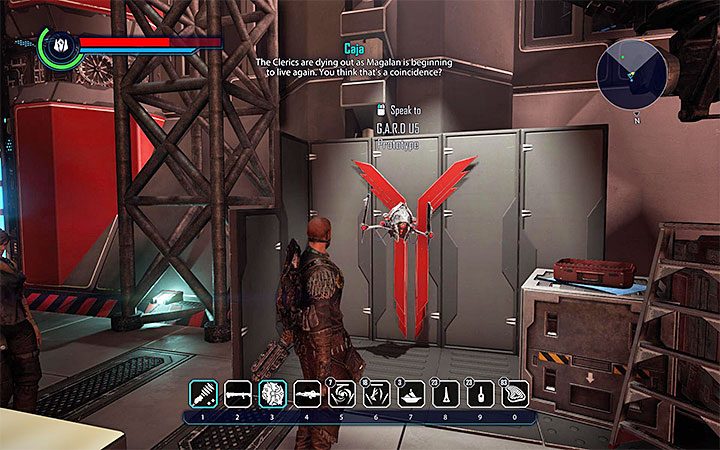 The quest can be continued after you reach the base of the Clerics - The Hort. Head for the factory and find the G.A.R.D. U5 Prototype dron. Interact with it and switch its AI module for the modified one. You can now return to The Fort (the drone will accompany you even if you use the teleporter) and bring it to Cutter. The drone will automatically begin guarding the city entrance (400XP). Talk to Cutter. You'll get 1000XP and 250 Elexit. Additionally, you can return to Cutter from time to time and pick up your share of Elexit from the money the drone collects from the people entering the city.

How to unlock the quest: Talk to Blake in The Fort. 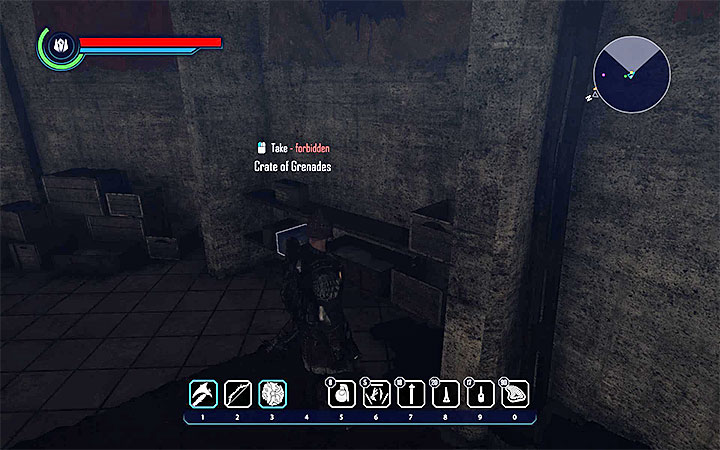 Blake will offer you the quest of stealing grenade boxes from the Duke. Go to the Duke's Bunker in the Fort, get to the tower and find the stairs into the basement. Camp Master is here and you have to avoid getting exposed by him (sneak, watch if he's not looking). Finding the Crate of Grenades is shown above and you need three of these (100XP). Go back to Blake and give them to him to get 200XP. As a payment, you can either get some Grenades or 200 Elexit.

Note - Complete this task before you complete the final of another side quest - Fresh Blood. Otherwise this quest will be canceled - you won't be able to meet Blake in the fort.

How to unlock the quest: Buy documents form Gunn in The Fort. 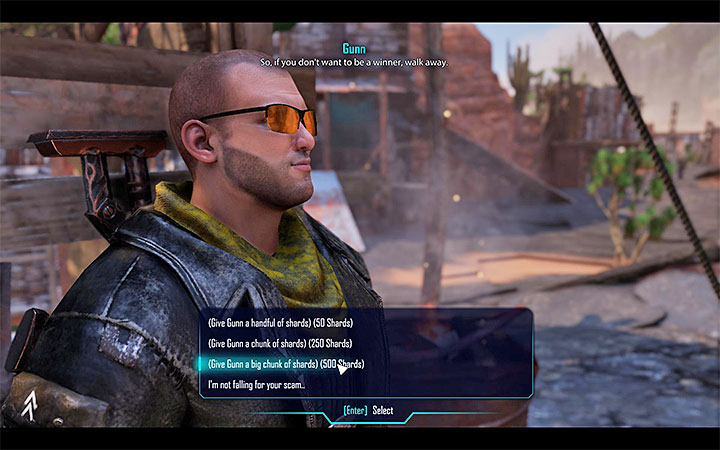 While this quest doesn't even officially appear in the journal, we feel that it needs more attention. Gunn is a member of the Outlaws, with their base in The Fort and during your first encounter you can give him 500 Elexit in exchange for valuable information. You should do that. In exchange, you will get a set of I.O.U. documents that certify certain debtors in the fort - you will become their vindicator. You can reach out to the debtors yourself, or sell the documents to other merchants. Here's the list of debtors:

How to unlock the quest: Talk to Bill in The Fort. 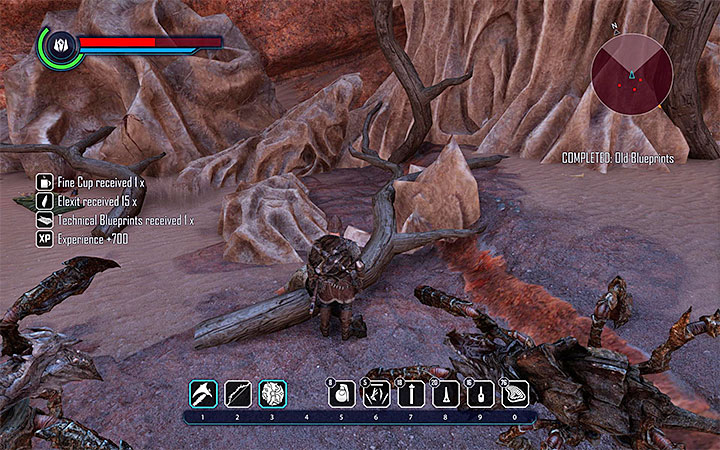 Bill may halt you when you're walking around The Fort and ask for help retrieving a precious treasure from an area infested with monsters. The location you need to explore is pretty far away to the north from the Fort. There are at least three strong Rippers in the area. You can try to defeat them, or lure them away and quickly come back to loot the corpse. You need to acquire the Technical Blueprints (700XP).

Go back to Bill with the blueprints and show it to him (400XP). Bill will go to his hideout for the payment and will either come back with Elexit or get killed by Vance. Should the latter scenario be realized, you will be able to talk to Vance, who will tell you that Mad Bob ordered to kill Bill. You can also inquire Mad Bob about the reasons to have done so.

How to unlock the quest: Talking to Cindy in The Fort. 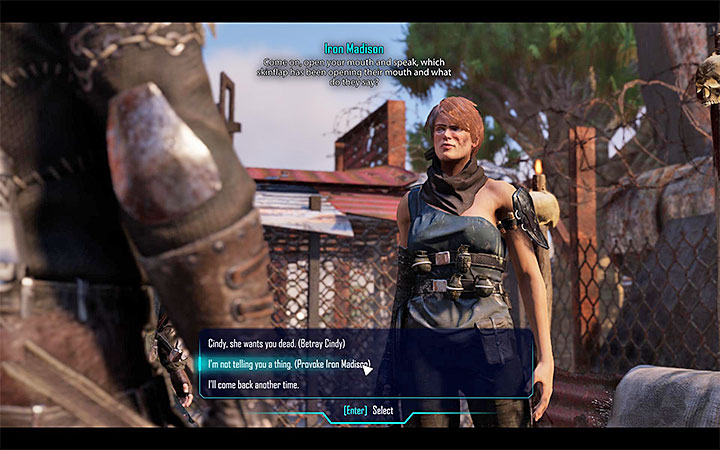 Tell Madison the truth, or provoke and kill her

Cindy is staying in the house of earthly pleasures in The Fort. She will tell you all about the troubles caused by Iron Madison, and about the plan to get rid of her (100XP). You can also tell her to pay you or not.

Iron Madison is guarding the cages near the Duke's Bunker. You can either:

Note - Killing Iron Madison may make it easier to free Frank the prisoner in another side quest - Liberation. Killing Madison worsens your relations with William (he later learns details about her death). This doesn't mean that you can't join Outlaws but you won't get additional rewards from William when you join his faction.

How to unlock the quest: Talk to Mad Bob in The Fort. 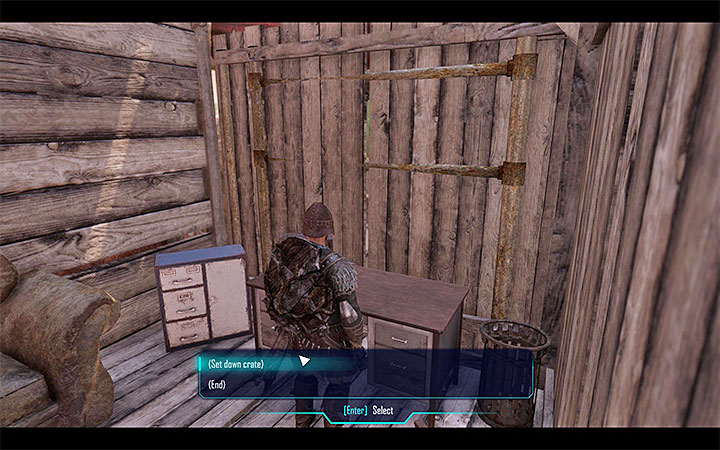 This quest should be unlocked during the meeting with Mad Bob after the Scrap Delivery quest is finished. You will learn about his debt as well as receive a Gift Package along with 1000 Elexit to pay up. Reach the hut in the northern part of the Fort. Leave the package from Mad Bob on the desk (as shown above) (50XP).

Go now to the bar and talk to Ace in order to give him 1000 Elexit. You can go back to Mad Bob (100XP). You will learn that the sincere gift was actually a bomb (1200XP). You can ask Mad Bob for a payment - you'll get 500 Elexit and will be able to move into the hut that was previously owned by Ace and Spade.

After you visit the hut, you may encounter Ace, who'll accuse you of having taken part in his brother Spade's murder. Attack him or pay compensation - 200 Elexit (300XP).