This page contains the walkthroughs to various side quests, which you can complete while in Goliet. Completing most of them will win you favor of Berserker leaders. 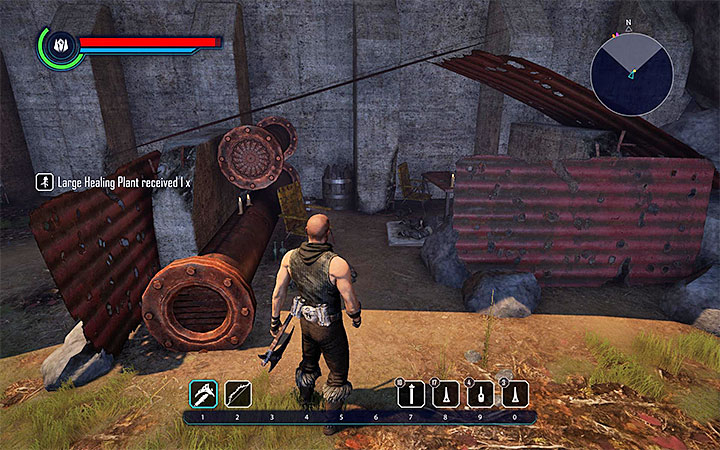 Cultivator Eldur works in the northern part of Goliet, and he'll ask the protagonist for finding Alvar, the missing guard who was supposed to be protecting the main gate. Return to the village entrance and talk to the other guard, Drog. He'll send you to the tavern, where you'll have to talk to the innkeeper, Oran. Then, you'll have to ask some questions to Alvar's buddy - Argor - who's guarding the road to The Pit, west of the village. He, in turn, will send to search the interior of Ragnar's fortress.

Return to the village, and head for Hotel Ruins of Goliet. Check out the area behind the hotel (southern part of the building) and use the jet pack to reach the base of the building. Now, you'll have to find the shack shown on the screenshot. Inside, you'll find Alvar - dead. Examine the body (50XP) and pick up the Crumpled Note (read it in your inventory). You can now relay the bad news to Eldur. You'll receive 700XP and 200 Elexit.

How to unlock: Unlocks automatically after the mutants attack Goliet. 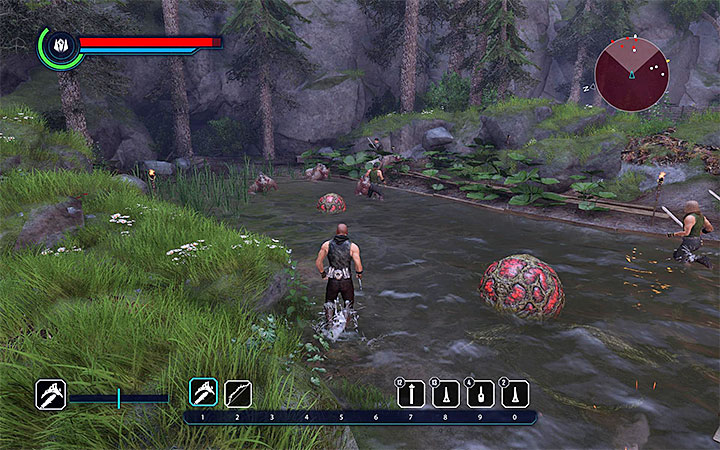 The monsters will attack the farmers' location

When exploring northern part of Goliet, the village may be attacked by mutants, which will begin a new quest. Help the farmers and guards defeat five Weakened Rotboars, and watch out not to hurt your allies in the process. You'll receive 65XP for each killed board (or nothing if an NPC did the job), and an additional 800XP for having dealt with the threat. After the fight is over, talk to Orik.

How to unlock: Talk to Alrik in Goliet. 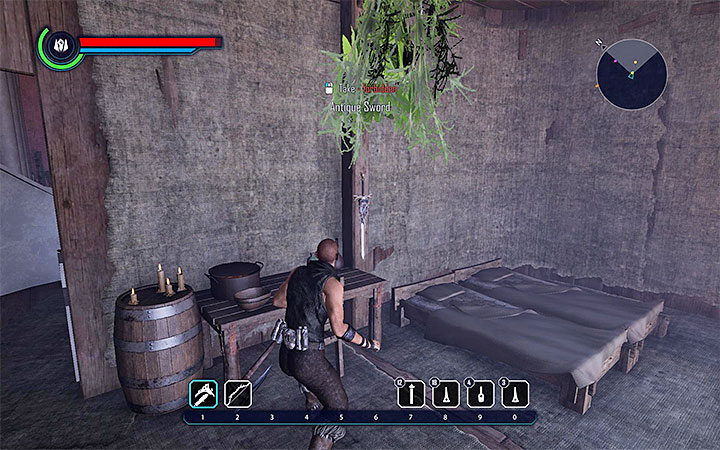 Alrik can be found in the tavern in Goliet. Ask him about the rarest item among those he's searching for, and you'll be given the task of stealing the sword of Erik Eisenfaust from Ragnar's chambers. Head for the Hotel Ruins of Goliet. Ragnar's private chamber is located behind the throne room, on the right. The biggest problem, however, is the guard in front of the door. Note that the guard is moving between two posts. Wait for him to be on his way and sneak into the chamber once he's far away. Make sure to use stealth mode for this one. Quickly grab the Antique Sword hanging on the wall shown on the screenshot (100XP). If you fail to do this once, leave the chamber and return to try again once the guard goes away (you cannot be seen by any other person in the hotel). Bring the sword to Alrik. You'll receive 1000 Elexit and 200XP.

Note - As an alternative, you can return the stolen sword to Ragnar. You'll get 200 Elexit and a thank you, but the quest will be cancelled. You could also warn Ragnar of the planned theft attempt, but the chief would simply ignore it. 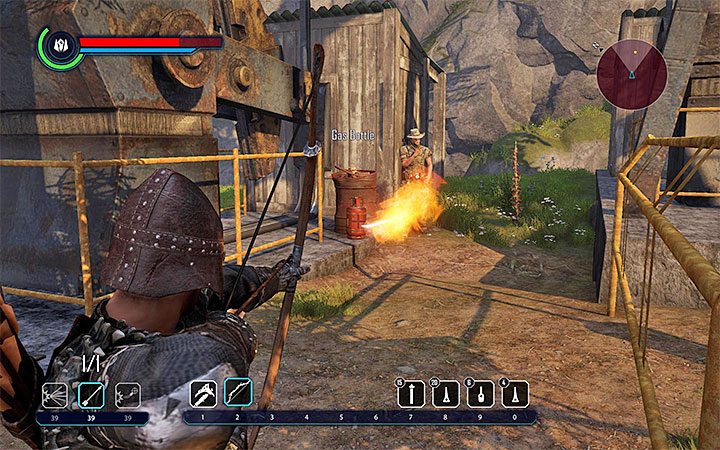 Ornir can be found in southwestern part of Goliet, near the tavern. He will express his concern about the Outlaw member sniffing around The Pit, and suggest you get rid of him. Leave the village and head to the inactive oil well, not far west of Goliet. That's where you'll find Bigby.

You can attack Bigby on the spot, before you even talk to him. To do so, aim at the red canister shown on the screenshot and use any weapon to finish the job (Bigby has a crossbow to defend himself). For killing Bigby, you'll get 300XP, and additional 400XP (and 100 Elexit) once you return to Ornir.

The first alternate solution is to help Bigby reestablish his trade with Ornir. To do so, return to Ornir and convince him to change his mind. You can use of the optional dialogue options (required Suggestion skill, or at least 3 points in Crafting), or bribe him for 300 Elexit. You'll receive 200XP and additional 150 Elexit after you've returned to Bigby.

The second alternate solution is to betray Ornir. After talking with Bigby and learning about the trade exchange you can go to Jora in Goliet. You will receive 600XP. You should also go to Angrim. Speak with him about sentencing Ornir for breaking the law and receive 250 Elexit. 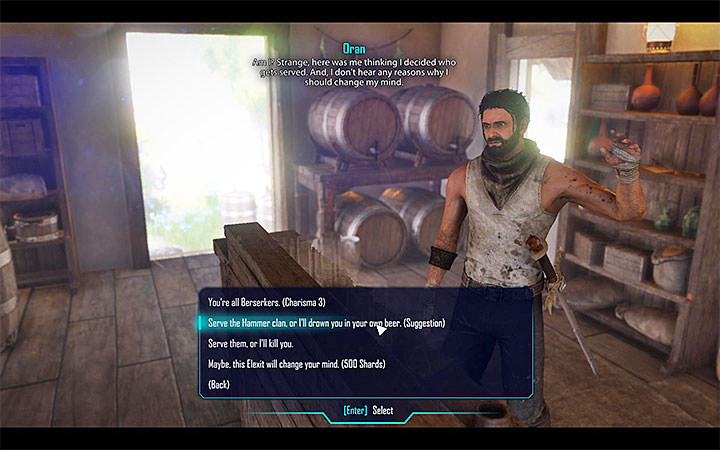 You can persuade Oran to change his mind in several ways.

Cormag is in one of the buildings next to the stairs leading to the Hotel Ruins of Goliet. He can assign you the task of solving the problems caused by Eldur the cultivator. From Eldur, you learn that Oran the innkeeper does not want to serve him and other members of the Hammer clan. Go to the tavern and talk to Oran. Talk to him about his conflict with the Hammer clan and choose how to solve this issue:

No matter which option you choose, you gain 200XP and learn it has been Angrim who forbade serving the Hammer clan. Return to Eldur to receive 200XP and 100 Elexit. Additionally, you can go to Cormag (500XP) and choose whether to tell him the truth about Angrim's ban (you get 250 Elexit) or keep this information to yourself. 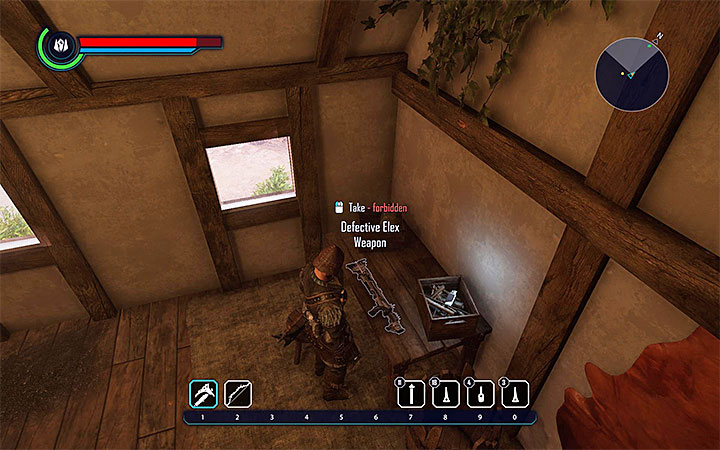 The Elex weapon is in the cabin, however if you take it, you will break the law.

Angrim can be found in one of the cabins in Goliet (north of the hotel). When you meet him, you can ask him for work. After you promise him to obey the berserk law you are tasked with bringing him the forbidden Elex weapon from Jora, who manages the items thrown into The Pit. Go to Jora and talk to her about Angrim's weapon. You can act in two possible ways:

The Seedling in the Forest

How to unlock this quest: Speak with Angrim in Goliet. 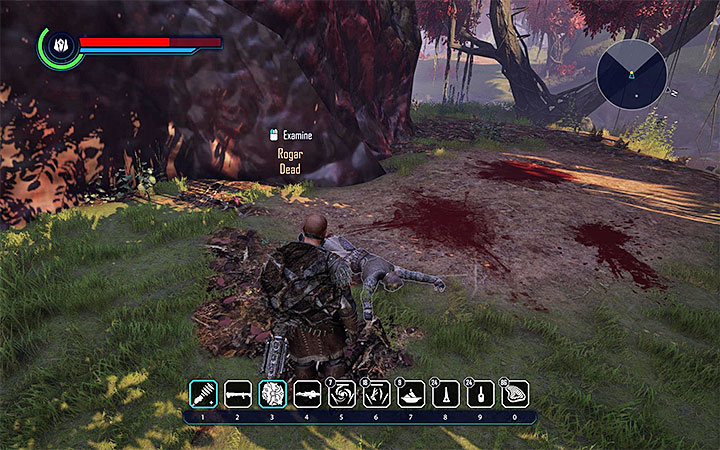 You should get this quest from Angrim after you complete (or fail) his previous mission - Forbidden Technology. You must search for a lost Berserker, called Rogar. Head to Valley of the Damned located west from Great Lift. You should go there when your level is high because you will have to fight a tough battle.

When you reach the appointed place, you will encounter five Alb Scouts. They are dangerous both at a short and long distance (they use energy weapons and flamethrowers - hide behind bigger trees if you want them to get closer to the hero). Take them by surprise and eliminate one by one. When the fights are over (850XP) you must search for Rogar's corpse which are presented in the picture. Examine them (800XP). This completes the quest but you can also give your report to Angrim and receive 400XP as well as 100 Elexit.

Warning - If you don't want to wait with this quest until your hero is strong enough, you can simply run to Rogar's body and interact with it. However, you can lose a lot of energy because Albs use good ranged weapons. 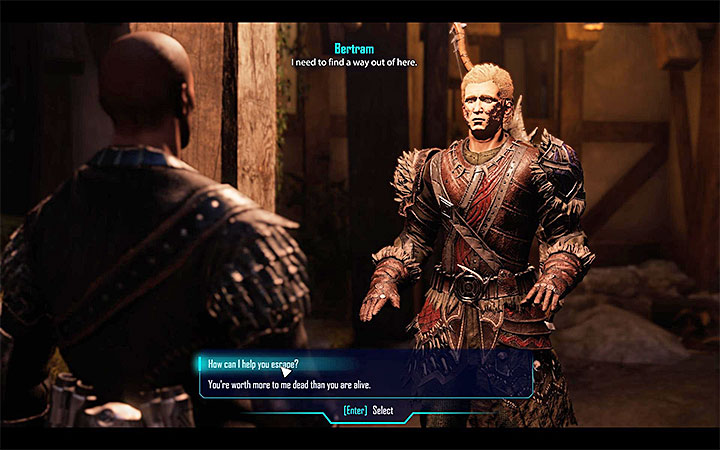 After you blow Bertram's cover, you can kill hi mor help him escape from Goliet

This is a yet another quest you can unlock during your first meeting with Angrim in Goliet. This time around, during the conversation talk about the Clerics. You will learn that Angrim suspects that there is a Cleric spy in the village. You have to identify him. The spy you are looking for is Bertram - you can find him in the central part of the village (he can offer you buying back the clerics' weapon during the Dangerous Goods quest). Select all the dialog options to verify whether Bertram works for the Clerics. Return to Angrim, who issues the order to kill Bertram.

Once again find Bertram in the village. If you want to kill him, it is best to perform a sneak attack instead of choosing the proper dialog option. After you kill Bertram (200XP) report to Angrim - you get 200XP and 100 Elexit.

An alternative solution is to help Bertram escape from Goliet. You are sent to Rijka, Ragnar's wife. She will arrange the escape. For completing the quest this way you get 200XP. Annotation - If you want, you can tell Angrim that Bertram has left the village, however this way you accomplish nothing. Moreover, you make Angrim angry. Bertram can be found further in the administration building in The Hort (Clerics' headquarters). You receive his thanks and 175 Elexit.

Unlocking the quest: Talk to Drog in Goliet. 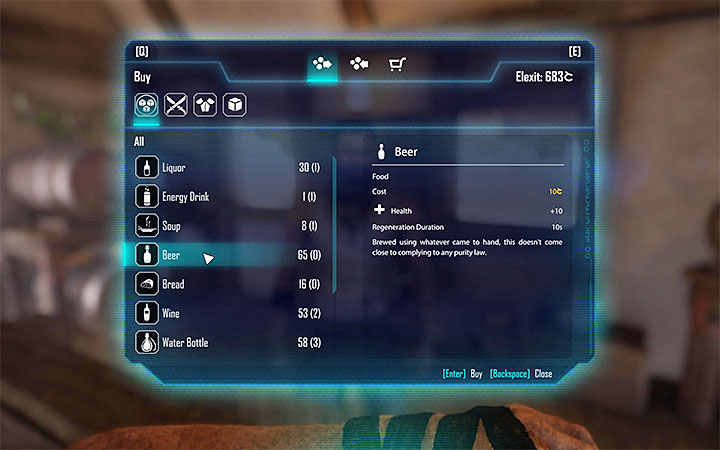 Drog guards the west gate to the village and he should talk to you the first time you attempt to leave Goliet. The guard wants a beer, which will help him surviving until the end of his watch. Go to the tavern, talk to Oran the innkeeper and buy a beer for 10 units of Elexit. For delivering this beer you get 100XP. As far as the payment is concerned, you can refuse, start a duel with Drog (do not worry, he will not die) or chose the unique dialog option, which appears only if you have at least 1 Combat Skill Point. If you manage to defeat Drog, or managed to change his mind, you get 50 Elexit.

How to unlock the quest: Talk to Caldrim in Goliet. 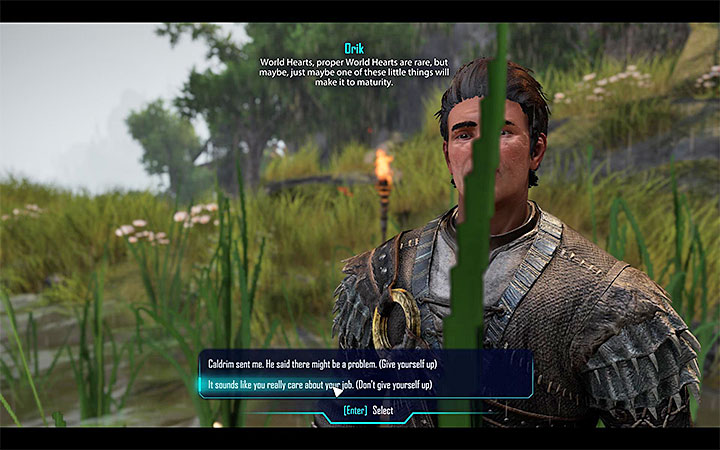 Throughout the whole conversation, hide the fact that Caldrim sent you

This is one of the jobs assigned by Caldrim of Goliet (he works in the temple, converting Elex into mana). You should unlock it right after finishing the side quest: Elex for the Mana Shrine (which you can also find in this guide). Go as Caldrim asked and talk to Orik from the northern part of the village.

When you meet Orik don't tell him that Caldrim sent you, or the conversation will end and the quest will be failed. He will tell you all about his seed experiments (100XP) and promise to share the results in the future. After that, go back to Caldrim. You can:

How to unlock this quest: Speak with Born in Goliet. 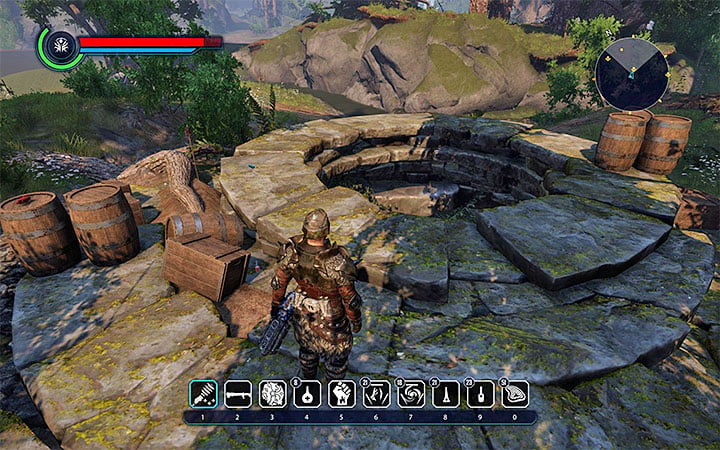 During one of your conversations with Born you can receive a quest during which you must deliver ripe healing roots to villagers. Before you go and search for them, you can use 2 Survive points during a conversation and instruct Born - you will receive additional 25XP.

Those roots can be found on a small island east from the village. However, you should go there when your hero is rather strong. There are two powerful monsters on the island, e.g. a Night Shade. There are also a few weaker creatures such as Rippers. Of course, you can try to avoid the monsters, run to the quest items and run away after picking them up.

You must find 8 ripe healing roots (200XP). During this process you can examine a well presented in the picture above (the middle of the island). Jump into it and you will land near Ignis Artifex sword that is stuck in a rock (53 damage, +20% to fire damage). Take the roots back to Born. You receive 5 Cultivator loafs and 180 Elexit (if Nasty is your companion then she will force Born to pay 50 Elexit more).