The Last Flight is one of the main quests that are unlocked at the beginning of the fourth chapter in Elex. This quest is a continuation of a previous one, Defective Reactor, during which you were looking for one part that was necessary for repairing Jax's aircraft. Here, you must complete the repairs and use the flying machine to destroy the barrier that surrounds the Ice Palace. 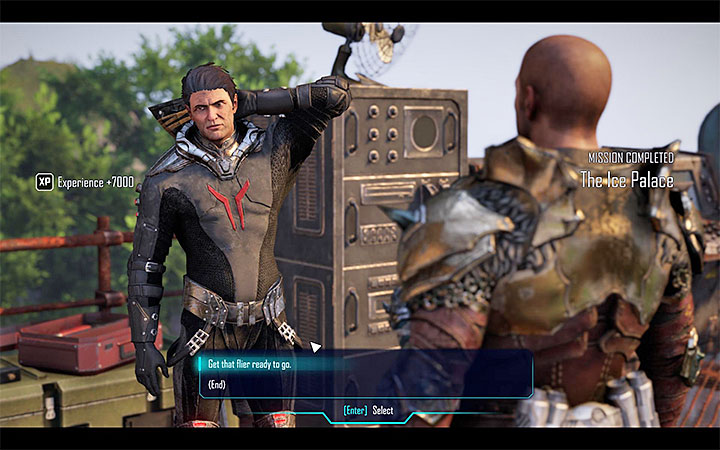 Go to Harley in Camp in the Center and speak with him about the preparations for using the aircraft during the attack on the palace. If you managed to convince Harley to give Jax ownership of the flier then you will receive 1400XP.

Harley informs you that you need to find another part – a Control Jet. Start your searches in Xacor. You must reach one of the bunkers (sneak or kill all enemies in the area). Raider Control Jet lies on one of the crates (3500XP). Return to Harley (3500XP).

Before you proceed further in the story, you must first complete main quests from the fourth chapter that were described in the previous pages of this guide. Below, you can find a list of the required quests:

Preparations are now over (7000XP) but you must also be sure that:

Speak with Harley and tell him that you are ready. Jax won't pilot the aircraft, this suicidal act will be performed by Ray. The protective barrier around the Ice Palace is now destroyed and you can proceed to the game's finale (7000XP).