On this page of the guide to The Elder Scrolls Online you can find a walkthrough of tutorial available in the Morrowind expansion set. Tutorial is a Broken Bonds quest which is activated when you start the game for the first time and which can be treated as a tutorial to the most important game mechanics.

Broken Bonds tutorial - when can it be activated? 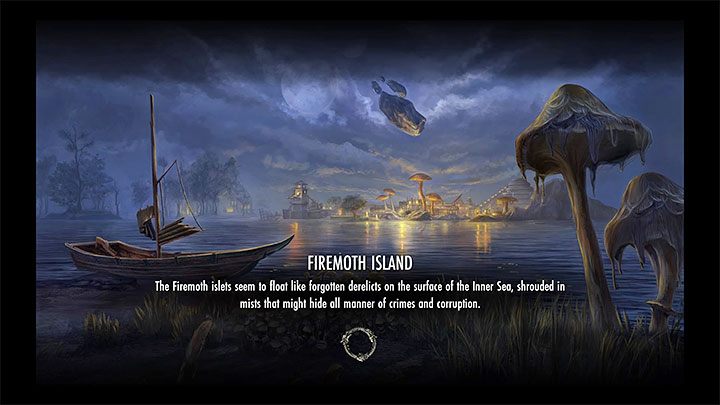 Broken Bonds is a starter quest / tutorial for the basic version of the TESO game. This is a Standard Edition of 2020. So, it's the version sold with the Morrowind add-on (in the past it was offered as a separate expansion set). 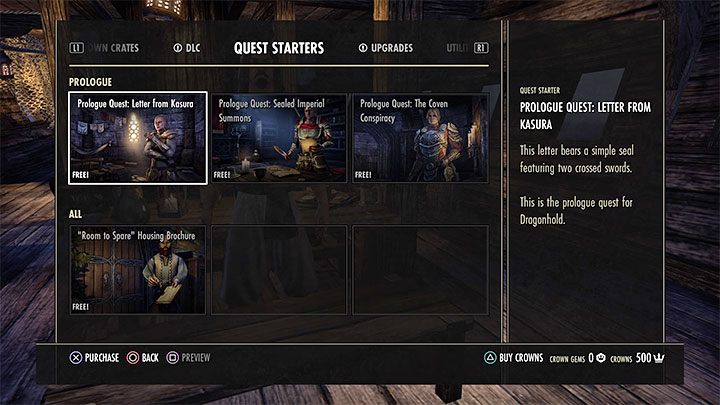 A different tutorial may activate if you have a different version of the game. Examples of other tutorial quests are the following:

You can return to unfinished tutorials / starting quests later in the game. To do this, you must visit The Crown Store, go to The Quest Starters tab and select a task of interest from the Prologue section. You must have unlocked access to the associated expansion set.

Tutorial - can I skip it? 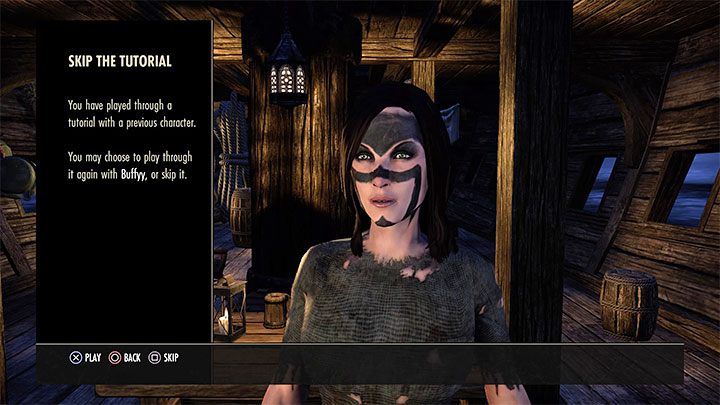 After launching the game for the first time, you will be forced to play a tutorial after you create a new character by using a character creator wizard.

You can skip the tutorial when you create more characters and in the case of the Broken Bonds mission you will be immediately transferred to the island of Vvanderfell. After all, we recommend taking a tutorial, as at the end of the Broken Bonds quest you get a few valuable rewards and you can be promoted to a higher level of experience more than once during the course of this quest. 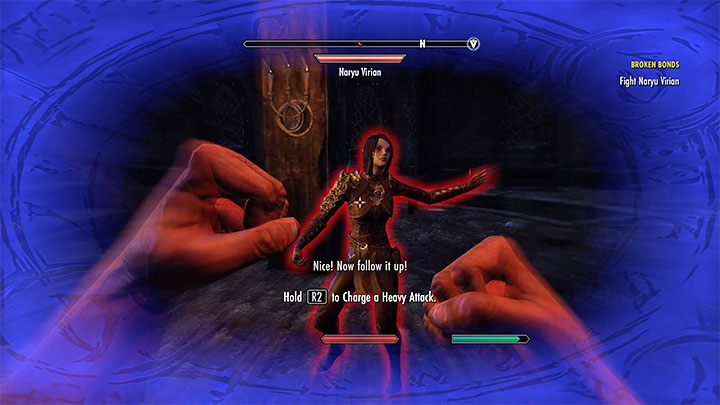 It's an easy quest, but you'll find a full walkthrough below. It's a linear quest, however, some battles during this task may occur in a different way due to your gameplay style (for example, if you play as a fighter, rogue or mage).

Pick up the Good Travels! letter and read it. Listen to Fonten Jodain and reach the location of Naryu Virian. You have to pass the combat tutorial - press the buttons according to the instructions on the screen to practice weak attacks, strong attacks, blocking and parrying attacks. This is a risk-free fight and after it is over, you can optionally ask Naryu Virian for another duel to practice the combat mechanics a bit more. 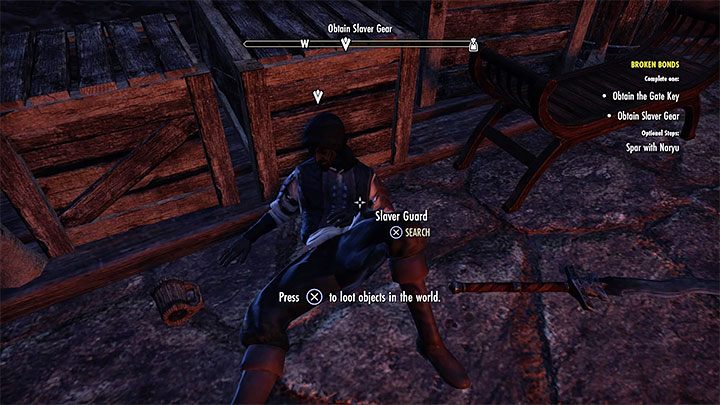 You will receive 2 new mission objectives. Go outside and head to locations associated with the objectives. While dealing with the main targets, it is of course worth exploring the surrounding areas - you will be able to acquire more items.

The Slaver Gear is in one of the indicated buildings - you can take it from the Slaver Guard. Remember to open up your inventory and equip all acquired armor and weapons. 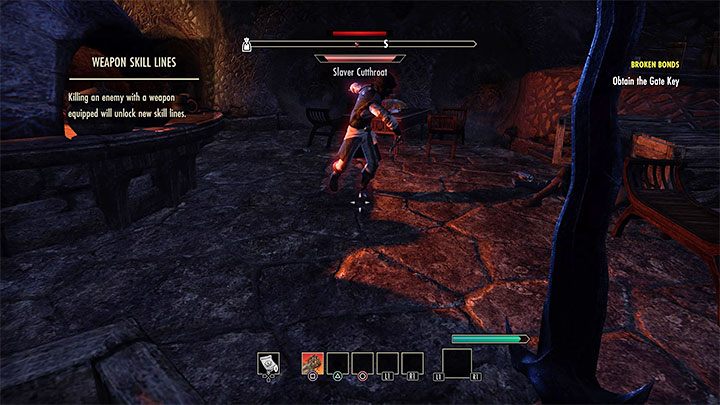 The first opponent, Slaver Cutthroat, will appear in the room. Use regular or stronger attacks to defeat him. 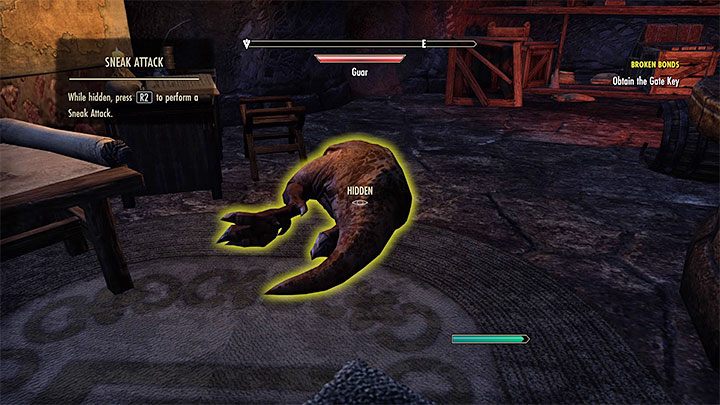 The Gate Key is located in a separate building. Once inside, a sneaking tutorial will activate. You can press the crouch button and sneak on the Guar monster to weaken it or attack it by surprise. 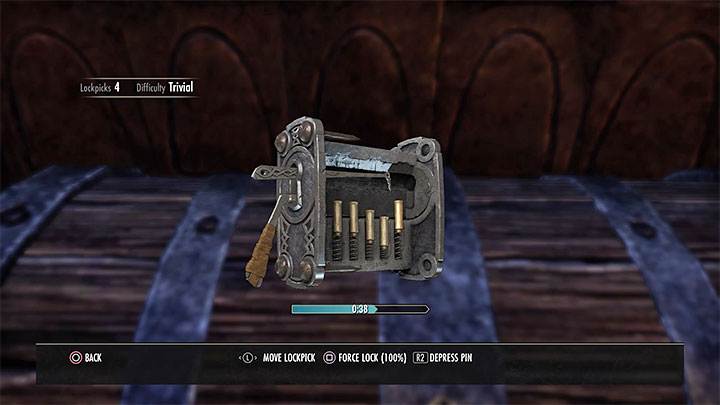 The key is in a locked chest and you must complete a special tutorial with a lockpicking mini-game. You'll need at least one lockpick for this - you can find them in a number of searchable containers.

The mini-game is not difficult and on top of that you are dealing with a lock of the lowest difficulty (Trivial). But you have to complete this task in less than 60 seconds. Start by choosing one of the five lock pawls. Hold the button to use a lockpick. You have to let it go right after the lock pawl starts moving sideways so it's locked in place. 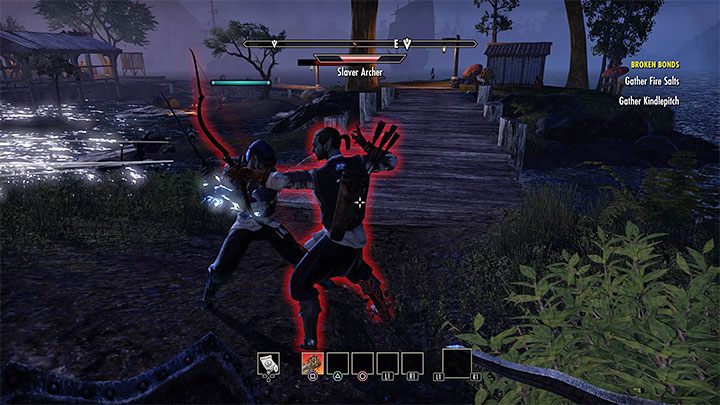 Go to the place to meet other prisoners. Talk to prisoner Eoki and then Naryu Virian. You will get a new objective, namely, to acquire the materials to make the bomb - these are Fire Salts and Kindlepitch.

Reach the passage to Firemoth Island Docks. In this location you can sneak past encountered slave hunters, attack them by surprise or engage in direct combat with them. It is worth noting that other players can help in winning the fights. 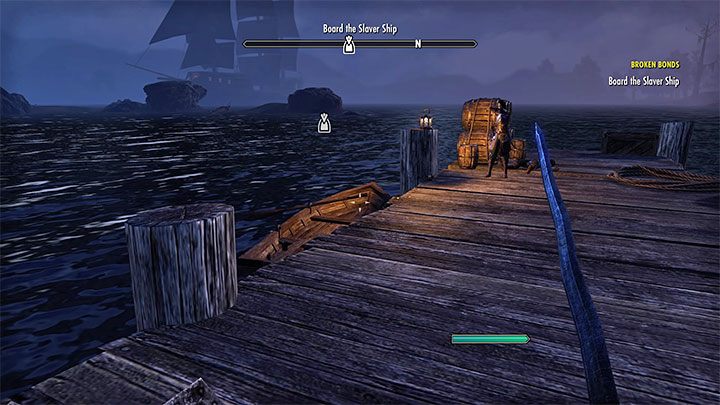 You can find the ingredients you need in a barrel and a chest. After collecting them, reach the boat and interact with it to get to the Slaver Ship. 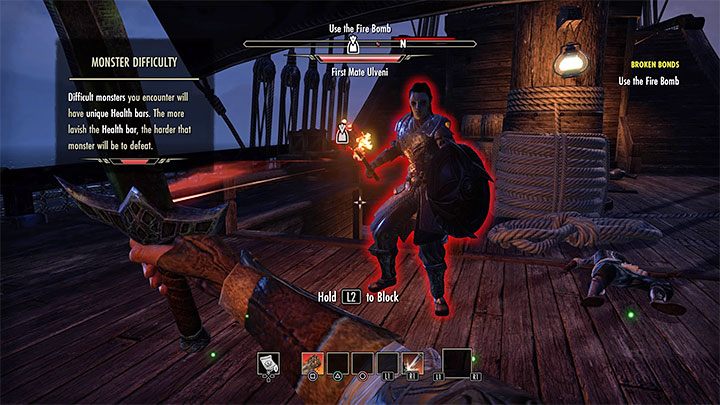 Head for the bomb site. On the way, you will encounter a mini-boss - First Mate Ulveni. During the duel, use those skills that you have already unlocked. It would also be good to have at least one healing item in stock in case of serious injury. Try to block Ulveni's attacks and knock the opponent off balance to expose her to further attacks. 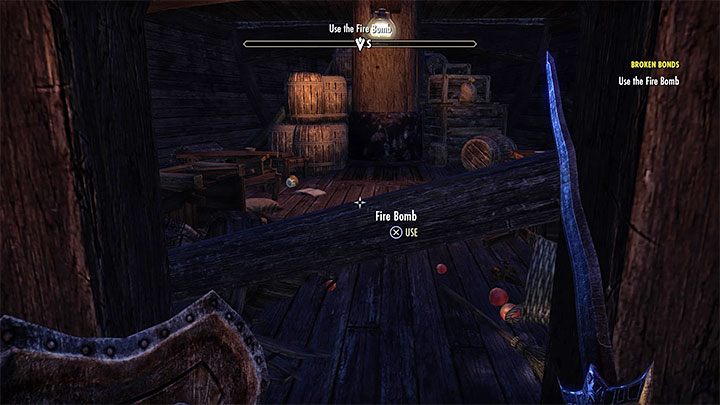 Get to a place where you can press the interaction button to plant a bomb. You don't have to fight Captain Svadstar cause Naryu will take care of him.

Go to the upper deck and escape the burning ship by jumping into the water. 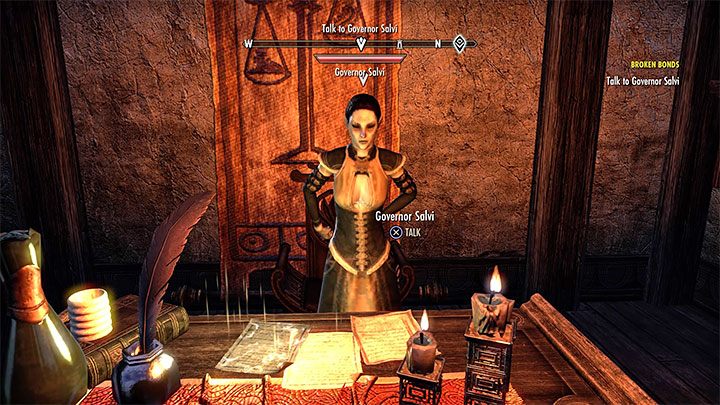 The action will move to the island of Vvanderfell, specifically the town of Seyda Neen. Talk to Sergeant Delms. Then go to the Census and Excise Office building and enter the Governor's Office where you need to talk to governor Salvi. Talking to her will end the game's first quest.

Rewards for completing this mission include: