The first Warden build that we're going to consider is meant for playing solo. You will gain an increasing amount of XP for doing quests, which will translate into the number of available skills, and hence allow you to unlock more of them. Playing solo, you will not have to limit yourself to any particular set of arms - you can use literally everything you want. Notice, however, that if you're playing as a mage, it's recommended that you use staffs, because these weapons are directly influenced by Magicka. In such case, a recommended arms set is War Maiden, i.e. the set that has additional magic stats. Elements of this set can be found in chests, dropped by monsters, or awarded to you for quests (the set cannot be crafted).

When you decide what sort of weapons do you fancy using, it's time to allocate first skill points. If you're using light armors and staffs (playing a mage) you can go ahead and pack all the points into Magicka. You will hence maximize the damage dealt by weapons and have more mana needed for using abilities. If you don't want to play as a mage, and would rather swing some of the melee weapons the game offers - invest in Stamina stats. In more advanced stages of the game, you will be able to modify your skills so that they also use this statistic (every weapon that's not a staff uses Stamina stats). 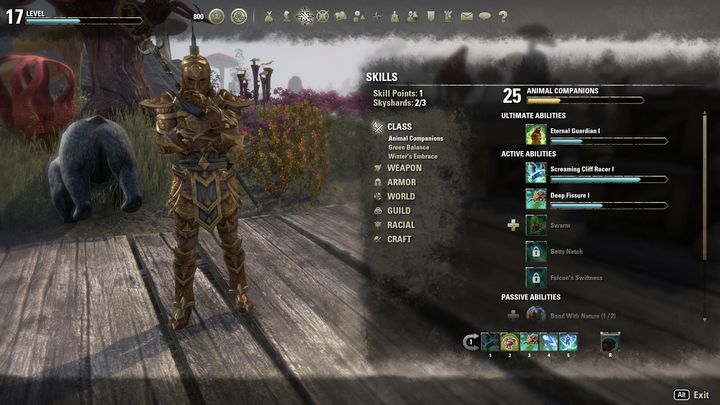 Here's the build we recommend for playing solo:

After gaining access to these abilities, the first thing to do is call the bear, i.e. use the Ultimate skill from the Animal Companions tree. The animal will follow us until it is killed or dismissed. Start fighting with the Scorch skill, which deals huge damage to all opponents in front of you. Immediately use the Impaling Shards to deal DPS and slow down enemies. You will end battles with Dive, which deals damage to a single target.

Cure yourself with Fungal Growth and Healing Seed if you receive severe damage during the fight. If before the fight you find that another clash will be difficult, join it after activating Frost Cloak skills. This way you will increase your defense stats.