An inseparable element of The Elder Scrolls Online is the PvP (Player vs. Player) system. The intention of the developers was to create three factions, which would compete with each other for the greatest glory on the continent of Tamriel, i.e. for the throne of the Emperor of Cyrodiil. In this chapter of the guide, you will find information on PvP matches, campaigns and how to become the Emperor. 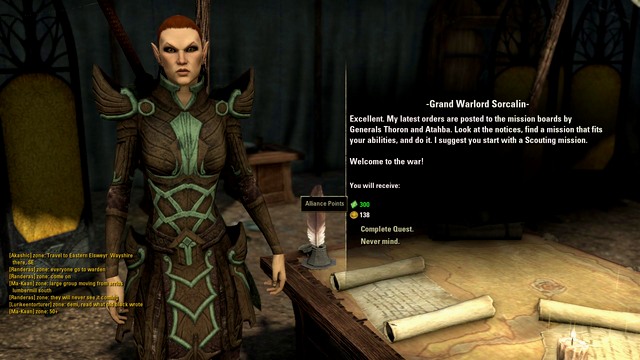 Alliance Points - the currency in Cyrodiil

To gain access to the PvP- Cyrodiil zone, your character needs to achieve at least, level 10. After you meet this requirement, you can select, from the menu, the campaign that you want to take part in. After you accept your choice, you will be transferred to the warzone, to the starting point of your faction. In Cyrodiil, there are many tasks that are connected with PvP and PvE. For completing those tasks, you are rewarded with experience, gold and a new currency accepted in Cyrodiil - Alliance Points. The Alliance Points can be exchanged for equipment, or used to support your campaign and buy catapults, or battering rams. You also obtain Alliance Points for completing a group task, like seizing of a fortress or an Elder Scroll, as well as killing a player of an enemy alliance.

Death in Cyrodiil is also different from that on the faction grounds. The player that is killed in the battlefield can be revived with the Soul Gem. If he is not revived, he can resurrect in the nearest camp. Your equipment will then not be damaged and you can return to the battlefield. 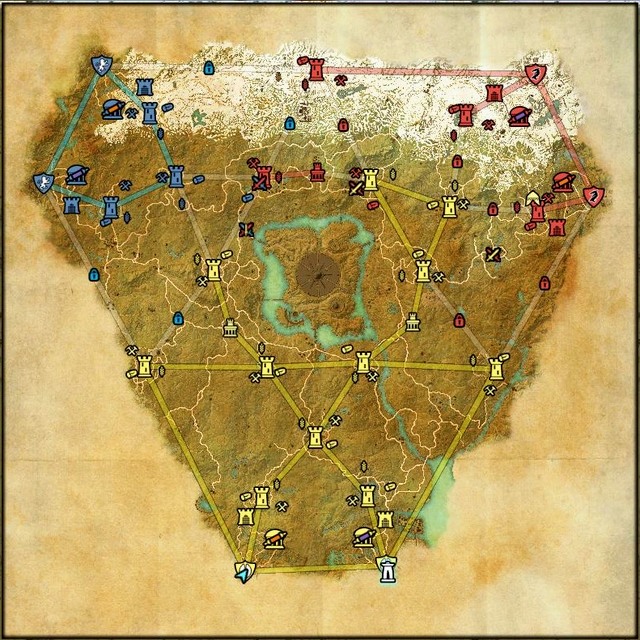 Transportation in Cyrodiil is also different from what you saw in the faction grounds. You can walk, ride on the horse or teleport, thanks to the special Transitus Shrines. To be allowed to use the shrines, you need to meet a certain requirement. Each faction, which seized a tower, can activate a safe passage between them. If this requirement has been met, there will appear a line, in your faction's color, across the map. If not, a transparent line, with a padlock in the middle, will be displayed. 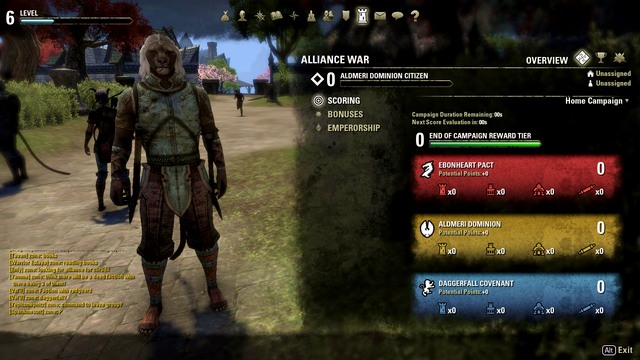 The campaign window in the menu

After reaching level 10, each player can select the campaign that he wants to join. Campaigns are dynamic quests so, you can participate them whenever you want to. After you have selected the campaign, you will be teleported to the PvP (Cyrodiil) zone, right into the middle among the three factions. Due to the differences in experience levels, all players are similar, in terms of attack and defense statistics.

The objectives during the campaigns can be divided into two types:

The Emperor is a status in Elder Scrolls Online, which every player that takes part in the PvP games, in Cyrodiil, dreams of. The abilities that the player receives are unique. You cannot obtain them in any other way and they provide great advantage during PvP. For obtaining the status of the Emperor, the player receives three main rewards: