This chapter of the guide to The Elder Scrolls Online has been devoted to the social options, available in Elder Scrolls Online. Among others, you will find here information on group creation or teleportation between the members of this kind of group. Also, this chapter explains the issue of players guilds, which constitute a very important aspect of each MMORPG. You will learn about their greatest assets and the possibilities that they create.

The group and friends 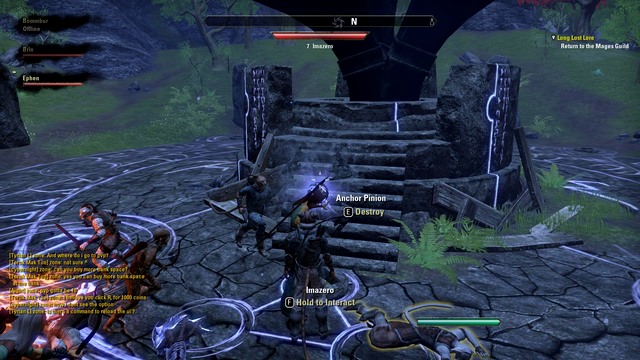 The purpose of Elder Scrolls Online is, of course, exploration and discovering the world with your friends. This is why the game could not do without the system of parties and guilds. It is a typical thing for MMOs to create parties and complete quests, or participating in expeditions into dungeons, together. This system has several specific properties. In one group, there can be between 2 to 24 players, which do not necessarily need to complete the same quest. At any moment, you can look up which quest your friend is currently at and teleport to him, by using a tab in the menu. The list of players that are currently in your group, can be looked up in the upper-left corner of the screen. By accessing the Group tab, you can display the current make-up of the party, the experience level of a given player and the mission that he is currently at.

The forming of a new group is subject to the rule of opening a new, common access room, where you can set the requirements. This room may include information that is helpful while searching for a player with the appropriate experience level or class. You can also take another path and, simply, join a group created by someone else. 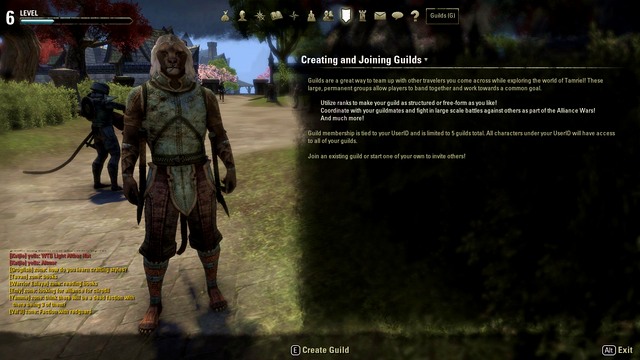 Guilds in Elder Scrolls Online are societies bigger than a group. Joining a guild is connected with common aims, which predominantly, are centered around taking over fortresses in Cyrodiil and gaining advantage over the enemy factions. A player that joins a guild allots all of his characters to that faction. From now on, all of the characters that you have created, are in the same guild and the only condition is that your characters belong to the same faction (the characters of Aldmeri Dominion cannot join a guild created for players from Daggerfall Covenant or the Ebonheart Pact, and the other way around). At any moment, you can create your own guild and invite your friends, or complete strangers from the same factions. After you create or join a guild, a separate tab will appear in the chat window, where all of the players, in a given guild, can communicate with each other, without any problems. Each player can join five different faction guilds and switching between chat tabs is performed by means of /guild1 /guild2, etc. type of commands.

In Elder Scrolls Online there is no general economy model. Instead, the developers decided to introduce auctions within guilds. Since you have access to the maximum of five guilds, at a time, the game offers you five different auctions . the effectiveness of the guild store depends on the number of players in that guild. The more players are members of a guild, the better its economy. You will be able to replace more equipment and choose from among a wider variety of items. This kind of solution requires players to join guilds. Still, the advantages that it offers are not limited to bartering.